The following article was written by Ray Bradley and appeared in ‘Goal’ magazine in 1969:

Rangers and Venables have much in common. Both endured agony and frustration last season in the First Division, now the pressure is off and both have taken on a new lease of life after what may only prove a temporary drop in status.

Terry spent three troubled years at Tottenham before the fans abuse finally drove him across to West London in a ¬£70,000 close season deal. Venables frankly admits that things never really went right for him at Tottenham and had no hesitation in agreeing to the move.

“Spurs had taken up a three-years’ option on my contract and I could have stayed,” he says. “But my future there was uncertain so I think the move to Rangers was a wise one.” 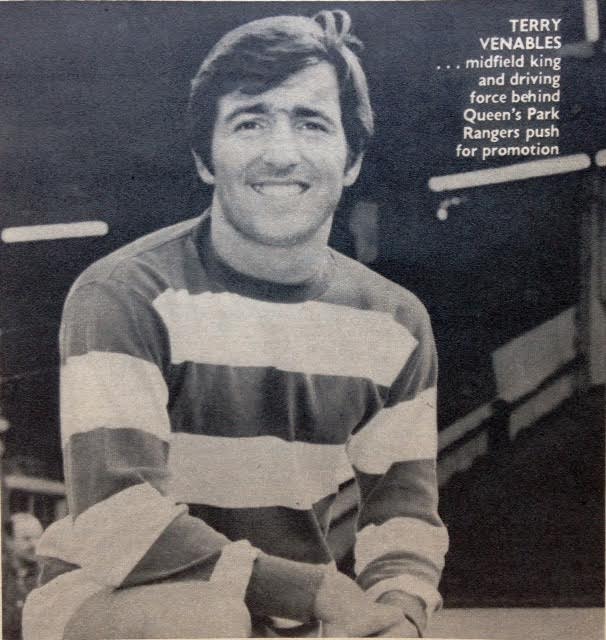 Certainly the switch has proved a big success for both club and player as Rangers have shown with a sparkling start to the current campaign. And the man that is really making these Rangers click again is dynamo Venners.

“Terry is the missing link that we lacked last season,” says Rangers boss Les Allen. “He can control the game for us and his know-how and experience has helped to bring out the best in the younger players. He has settled in quickly and is really playing well. That’s why I made him skipper.”

The Venables’ value to Rangers is as a midfield director of operations – the role he filled so successfully for Chelsea in his early days. And his ability and dominating personality made him an ideal skipper.

At Spurs his value diminished because players wanted the ball at their feet and Venables had been brought up on a style where players were prepared to run for him. His ability to find a moving colleague with an accurate pass was lost and the fans hounded him.

Some fans accused him of being static because he is not the most fluid of movers, but no one could accuse him of not being a grafter. As Allen quickly points out:

“Some people say that Terry just stands and dictates. That’s not true. He works very hard and is a very busy player. He is one of the fittest players on our staff and is a terrific example to the younger players in training.”

Although Venables was a first team regular at Tottenham the fans never really accepted him. Yet he still admits it was a wrench to leave.

“I’m sick that things didn’t go better at Spurs,” he says. “Some people told me I was daft to go into the Second Division, but I was happy about the move to Rangers right from the start. We’ve got terrific players at Loftus Road. Experienced players like Barry Bridges, Rodney Marsh and Clive Clark and promising youngsters like Dave Clement, Tony Hazell, Frank Sibley and Ian Morgan.”

“It’s early days yet but I think we have the ideal blend of youth and experience that is needed to get the club back into the First Division. And in Les Allen we have a manager who can get the best out of his players.”

“Judging by the way the lads have started, we must be in with a chance of going up. A good start means everything and builds up confidence but I don’t want to make any predictions yet.”

After seven seasons of First Division football, the drop in status and the difference in pace has helped Terry’s confidence to come bubbling back. His role as midfield dictator and his driving personality has helped to organise and add subtlety to Rangers tearaway style. With each game his leadership and inspiration is becoming a very dominating force.

Now everything is going right again for Terry Venables.’

I think that is a reasonable assessment of Terry Venables, but I have to say a number of our so-called “promising youngsters” were already well established by the time of his article.