The previous encounter between the two sides was played a few years ago at Wembley’s Vale Farm ground. The R’s lost that one I remember and Joe English informed me that Hendon were also the victors prior to that in 1974.

There was no set admission charge but you were invited to make a donation in support of Gary McCann’s testimonial. Apart from the match programme, a team sheet was also available for 50p.

Listed in goal for the R’s was Jonathan Henly who I later ascertained was on trial after being released by Reading recently. There was also central midfielder Axel Prohouly who had been signed from Monaco last month. I also happened to notice that the match referee was a certain Mike Heavey. 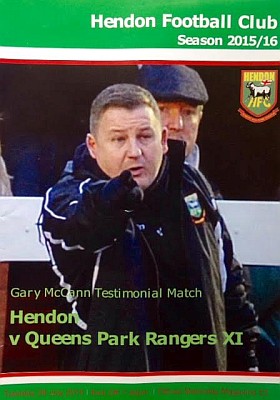 James Haran captained the Rangers side and surprisingly, Ryan Manning started at left-back. It was then up to Gary McCann to get the game underway before retreating to the dugout.

Aaron Mitchell shot wide and despite Reece Grego-Cox’s hunger for the ball, he was in fact, receiving very little service.

It was Hendon who took the lead after 17 minutes when Andre De Costa’s 25-yard free kick curled into the net with Henly rooted to the spot.

As Rangers looked for an equalizer, Grego-Cox shot wide and after the half-hour mark, Axel Prohouly was well placed to pull the trigger following Petrasso’s attempt being pushed out by the Hendon keeper.

Just before half-time, Aaron Mitchell’s shot was deflected out for a corner, and Michael Petrasso had to be replaced by Olamide Shodipo. Half-time: 1-1.

Not surprisingly Paul Hall made a number of changes after the interval. It was the Greens who went close when they rattled the crossbar from a free kick. Then Osman Kakay had a good opportunity for the R’s and in the 51st minute it was left to Tyler Blackwood to nod the ball into the net from close range following a cross from Ben Pattie.

Hendon equalized ten minutes or so into the half through Mahrez Bettache. Then Sam Murphy’s goal put the home side into the lead in the 68th minute when he curled the ball into the net.

Henly stopped a powerful shot with his legs and the ball was then kicked off the line from the resulting corner.

Olamide Shodipo made it 3-3 when his free kick taken from just outside the box, flew past a seemingly unsighted keeper. However, the Greens clinched the winner with about five minutes to go.

The ball had gone out for a corner but there was a delay whilst James Haran received treatment adjacent to the Rangers goal. From the corner, Brathwaite rose to flick the ball home for Hendon’s fourth.

The R’s had briefly been down to nine players and had in fact played with ten men in the closing stages. Final score: 3-4.