Nearly three weeks after our historic victory at Wembley, the Darlington match programme announced that:

‘In response to the continuing demand for souvenirs of this fantastically successful season, we have now obtained a special order of souvenir ashtrays which bear the club’s crest in blue and white and carry the inscription “Football League Cup Winners 1966/7”. 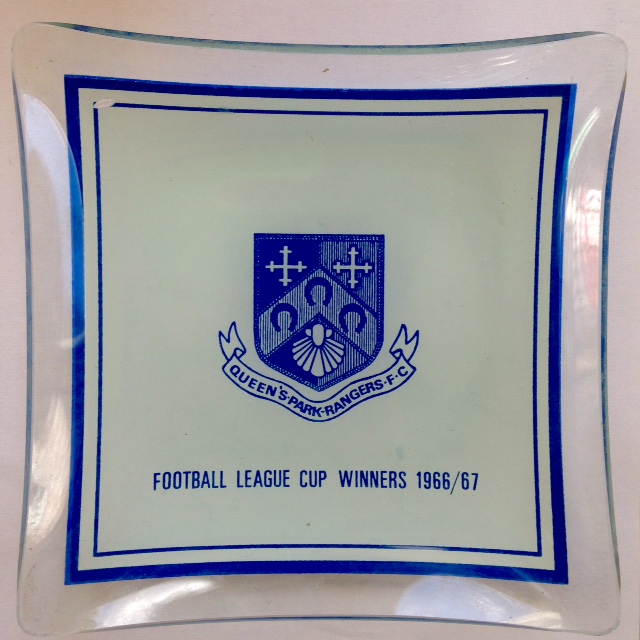 These are on sale at 3/- in the Pools Office and can be bought after the match. It is the intention to produce a set of these ashtrays and, if all goes according to plan, the next order will celebrate promotion to Division Two.’

There was also news in the programme of the legendary Mark Lazarus single:

‘All supporters may like to know that a new pop star has been born and has created a minor sensation with his first recording. We refer to Mark Lazarus whose striking rendition of the specially written “QPR. The Greatest” may take him into the charts.

The record is backed by a musical version of the now famous ‘Rangers Roar’ chant and is on sale at Supporters Huts and the Pools Office at 7/6 each. This unique recording will receive its public airing over the loudspeakers this afternoon and we confidently expect it to cause a riot!’

Lastly, ‘Ranger’ reported in his club notes that: ‘The BBC have been inundated with requests from supporters all over the country for a repeat of the film of the Football League Cup final. In principle the league have agreed that when the BBC have a rota turn for a mid-week football film they will be allowed to re-run the match between QPR and WBA. The showing will be after 10pm in the evening but the date is not yet known’.

One thought on “The 1967 League Cup Final Souvenir Ashtray”