In May 1965 three young children went missing in the Paddington District of London. The actual area where this happened was called ‘Maida Hill’, although few, if any locals called it that.

The area was populated mostly by white working class people, with added immigration throughout the 50’s and 60’s of Irish and West Indian manual workers. Many of the Irish workers found work in the Construction Industry, while many of the West Indians found work with London Transport.

Housing was difficult to obtain, and it wasn’t unusual for houses in this area to be occupied by several families. Few had running water, and central heating was almost unheard of. People still had open fireplaces and parafin heaters were popular.

Around this time, local Councils began a programme of building Council Estates and houses. Whole areas of inner London were earmarked slum clearance, including many parts of Paddington.

As a child at the time, I remember my parents and other adults talking about the children that had gone missing. A six-year-old boy, Michael Leigh, Juliana Adebona a seven-year-old and her three-year-old brother David from Errington Road, had simply disappeared while playing out in the street.

In those days it wasn’t unusual for very young children to be outside the house alone. The local streets and bombsites were our playground and the older children kept an eye on the younger ones.

As the days went by there were all sorts of rumours about the missing children, and few thought that they would be found alive.

The police carried out a door-to-door search of the local area, but there was no sign of the children anywhere! 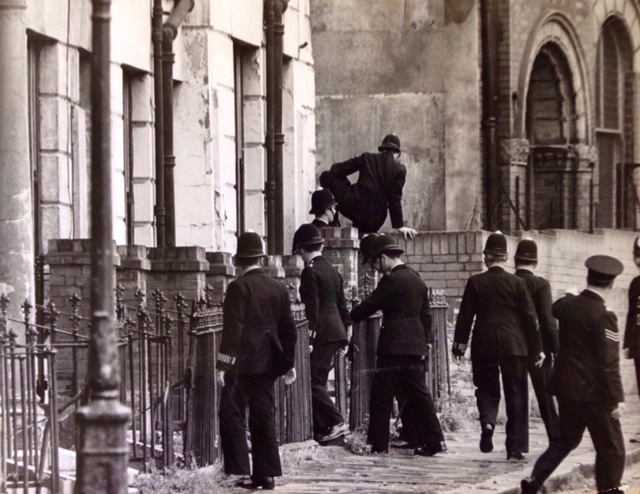 On the south side of Warlock Road, (W9), there was a row of 4/5 houses that were slums, but had recently been refurbished by the Council. The houses were ready for occupation, but had stood empty for a few weeks,

There were all sorts of talk about the children being held somewhere else and then dumped there, but I’m not sure that was the case.

The houses were empty. The bunker door could only be opened from the outside. I think the children had crawled into one of the bunkers and the door had shut
behind them. The police assumed that the houses had been searched, when in fact they hadn’t. 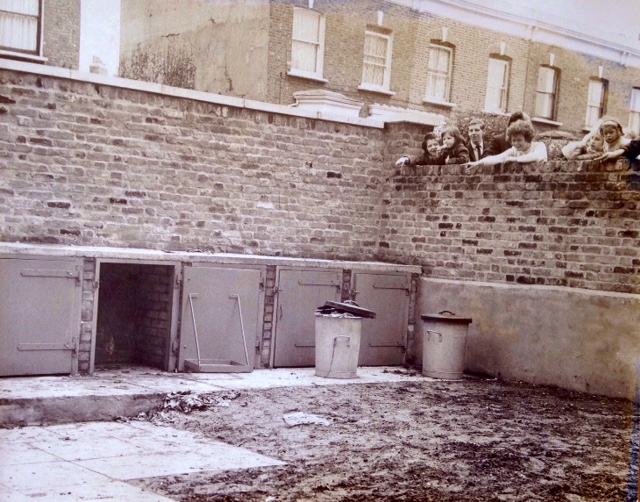 In his book, ‘Nipper’ Read, who arrested the Krays, said that he was involved in the search for the children. As a result, he insisted that in any further police searches, buildings that had been searched should be clearly marked with chalk.

A few days after they were found myself and some friends went to have a look at the bunkers. The one that they were trapped in still hadn’t been cleaned out. Even as a youngster, it seemed to me that they had been inside the whole time, (I could be wrong of course).

But if you can imagine the state of a small confined space with three terrified children trapped inside for 4/5 days.well, that’s what I saw.

I recently acquired the two press pics. shown above. The heading for the top one reads:

‘Inquiries Extended in Hunt for Missing Children’ and then the caption is as follows:

‘Inquiries have been extended in the hunt for the three missing children, Juliana and David Adebona and Michael Leigh, who disappeared last Friday from outside the home in Errington Road, Paddington. Countless people have been interviewed, hundreds of lines of inquiry have been followed up, and reports from all over Britain checked. ‘

Photo shows: ‘Commando police search derelict buildings in Paddington – in the hunt for the missing children.’

The heading for the bottom pic reads: ‘Three Lost Children Found’ and has the following caption:

‘The three Paddington children, Michael Leigh, 6, and his two friends, Juliana Adebona, 7, and her 3-year-old brother David, who have been missing since last Friday, have all been found alive. They were found in a dustbin shed at the back of a house at the corner of Warlock Road and Walterton Road, which was being converted into flats for elderly people.’

Photo shows: ‘View showing people peering over the wall at the dustbin shed in which the children were found today.’

7 thoughts on “The Missing Paddington Babes”