Two coaches set off from the Target and we arrived at the Stadium of Light in good time. I have to say that the stewards went out of their way to be friendly and helpful. And showing up on the screens around the refreshment area were highlights of various QPR victories from the 90’s.

I have to mention the steward, who must have been well in his 70’s, who kindly offered to obtain a match programme for me from outside the ground. Ten minutes later, sure enough, he was back with one clutched in his hand.

What was immediately noticeable was how assertive we were from the very first whistle. I have been critical of Matt Phillips in the past but he went on to have a superb game out on the right-wing and his cross in the 17th minute was headed into the left-hand corner by Leroy Fer. 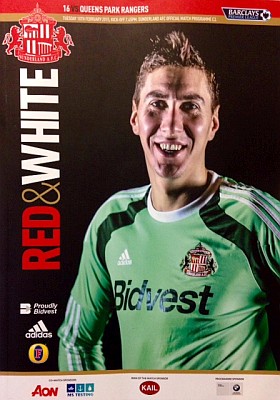 Rob Green made an astonishing save and later in added time, Phillips was again involved in Rangers’ second goal when he found Bobby Zamora and his Wembley-esque shot beat Costel Pantilimon to send the Rangers fans wild.

In the second-half, Rob Green made another outstanding save, but the downside was the departure of Leroy Fer on a stretcher. With at least 15 minutes to go, many home fans decided they’d had enough and the exodus had begun.

I was really pleased to see Michael Doughty come on – he replaced Mauricio Isla in the 85th minute. In some stats I read somewhere, apart from being credited with an assist, he also completed every one of the eight passes he attempted.

After getting the night bus from the Target, I arrived home at ten-past -four with THAT song still in my head!

First the dream tweet and the dream result. The 395 Queen’s Park Rangers fans could not quite believe their night.

There had not been a point away from home before yesterday. Indeed, there had been more rows than results. The only shame was that those fans were sat in the gods when Mark Atkinson blew and signalled a first win. The fight for survival has begun.

Who knows what inspired such a change in desire from the men in blue and white? Chris Ramsey and Kevin Bond, in temporary charge, stood by the side for their players throughout, and the team responded superbly.

A new manager can create an upturn in mood. Perhaps for Rangers it was club chairman Tony Fernandes’ promise of something different, with Tim Sherwood out of the running. “Think I have got the dream manager,” he said. “What QPR needs is a young, exciting manager.”

They did not have a young team last night, but you could not fault the desire. The spine looked as rickety as former manager Harry Redknapp’s knees but, in Robert Green, Rio Ferdinand and Bobby Zamora, Rangers had a platform and a shape for victory. Leroy Fer was excellent and Matt Phillips will rarely be afforded such freedom.

Sunderland were beaten after 45 minutes. By then Fer and Zamora had scored fine goals. It could have been more, so great was the dominance. By the finish, Rangers were out of the relegation zone and just two points behind Sunderland.
The loss of Redknapp gave freedom to his former charges.

Zamora led a 92nd-minute charge for a third such was the transformation. Fernandes must hope his appointment can carry this momentum.

In a campaign marked by chronic travel sickness QPR had failed to register a point or even go ahead in the entire season, before their arrival here last night.

Whatever positivity flowed through the tweet from Fernandes about a manager to be excited about, it clearly seeped into the hearts of his players. They bullied the life out of Sunderland in the opening 45 minutes, and this was a home side their usually unimpressed manager, Gus Poyet, had said now had “great” striking options following the arrival of Jermain Defoe.

Rangers never allowed that to be a problem, bar a couple of slips, when Defoe clipped a Jordi Gomez cross wide and Green pulled off an extraordinary save to tip Connor Wickham’s close-range effort on to his crossbar, before hooking it clear.

The lead came in the 17th minute and it was completely deserved. Barton had already shot over when Phillips crossed from the right and Fer lost Liam Bridcutt to power a downward header past Costel Pantilimon in the Sunderland goal.

Fer hit a shot that struck the Sunderland post and rolled across the face of the six-yard box on the half-hour mark, and then Zamora could have added a second in the move following immediately Green’s save when he failed to connect with Phillips’ cross.

He made amends in first-half injury time. Once more Phillips crossed from the right, the ball bounced as it came to the QPR forward and he shrugged aside Santiago Vergini before crashing home a volley.

Green pulled off two sharp saves in the second-half to deny Defoe and Ricky Alvarez. He also stood firm when Seb Larsson shot at him, and QPR recorded their first points away from home.

2 thoughts on “Sunderland v QPR: ‘A Win-Away, A Win-Away’ – An Outpouring of Relief and a Cue for a Song!”