With Harry Redknapp finally gone, the new regime made changes that were long overdue. We actually played players in their position, played with width, played with tempo, we were well organised, had a purpose and a pattern to our playhow refreshing!

Leroy Fer was a revelation, even Adel looked like he meant business. It didn’t go to plan, Caulker messed up, despite having a decent game, as did most of the side, but shit happensat this level, you get punished.

All this, against for me, the best footballing side at Loftus Road this term, or indeed last term. The hard truth is, we are simply not good enoughan ageing defence with players who try as they might they lack the youth that is pace.

That said, we are now strong and as one, but the big worry is, where are all the points going to come from? No doubt we are in serious trouble both on and off the pitch, but so are some of those that are around usbelief is all.

Next trip for me is Hull and back, lets hope it’s not hell and back!

The first-half was dominated by Southampton, who I didn’t think were at their best, but you could see why they are doing so well as they chased and closed us down at every opportunity to win the ball back. They also gave us little time to settle, whilst the R’s gave them too much space.

We were lucky on a few occasions, but especially when Green was outside his area in no-mans land, why I don’t know, and was happy to see the ball going over his head and drifting wide. And also when a Saints shot crashed against the crossbar.

Adel for me, played okay, but he was supposed to be playing behind Austin, but most of the time was nowhere near him. Charlie was isolated and had to chase long, fruitless, poor passes that he was never going to reach.

Taarabt’s nutmegs, as we know, don’t always come off, but when they do it’s magic. But that magic should be played on the edge of the opposition’s area, instead he lost the ball several times on the half-way line, and then we were under pressure.

During a poor first-half, the silence at Loftus Road was eerie, qprfinglas said to me that the crowd were nervous and that’s why it was so quiet. That may be, but their was also nothing to shout about. The crowd respond to what’s happening on the pitch and there was nothing much happening throughout the first-half from the R’s.

The second-half was much better and I thought that when Adel was replaced by Zarate, he showed the kind of pace and skill he has, looked very lively, upped the tempo and probably should have scored.

I think Leroy Fer played well and Joey Barton had his best game this season. His shot deflected by Austin led to an outstanding save from the opposition keeper. Dunne was solid enough until he went off injured.

Caulker played well until his wayward pass and made a great tackle late on when it was still 0-0, to stop a certain goal. I think Phillips needs more game time to show his best, but he was getting his crosses in early. But I have lost all hope in Traore, as he disappointed, not for the first time.

A 0-0 draw would have been a good result, but it was not to be with that goal and I don’t know myself whether our ‘goal’ was disallowed for offside or for a foul on the keeper? 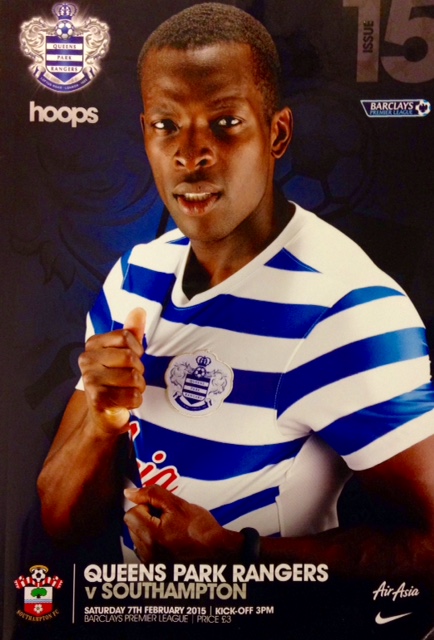 This was the sort of denouement that might convince Harry Redknapp he did the right thing to take a rest from management. Chris Ramsey, in temporary charge at Loftus Road following Redknapp’s resignation on Tuesday, does not suffer from knee trouble that afflicts his predecessor but he was made to feel the cruel pain that can come with leading a team as QPR were floored by a stoppage-time goal from Sadio Mane.

Ramsey had been told that he will be at the helm at least until after Tuesday’s trip to Sunderland as the club continues to deliberate over a long-term appointment, a deal with Tim Sherwood not having been reached yet. With a bit more luck Ramsey could have been heading north on the back of a victory.

Rangers enjoyed some narrow escapes in the first-half before tightening up in the second and would have taken a crucial lead if not for a wonderful save 15 minutes from time by Fraser Forster.

But as they strived to crown an encouraging performance by claiming three points that would have lifted them out of the relegation zone, QPR were hit by a devastating late counter-attack from Southampton, whose quest for a Champions League spot received a boost that Ronald Koeman believes could be critical.

“You have some key moments in a season and one of those was today,” said the Southampton manager, whose side are now third in the table, at least until Manchester United play West Ham on Sunday.”

The line-up that Ramsey chose showed his intention to inject more creativity into Rangers by bringing out the good side of enigmatic talents who had fallen out of favour with Redknapp.

That applies most obviously to Adel Taarabt, who has spent most of the season in internal exile at Loftus Road after losing the faith of the former manager. Ramsey showed his trust in the player by awarding him only his second Premier League start of the season, one of four alterations to the Rangers side.

Southampton started better. Rangers have had a vexing tendency to sabotage themselves this season and Rob Green was nearly punished for a misjudgement in the sixth minute, but Mane shot wide from 30 yards with the goalkeeper inexplicably marooned outside his box.

Taarabt, deployed just behind Charlie Austin, struggled to get involved but in the 10th minute he produced a flourish of trickery that took him past an opponent before he was fouled. That was a cue for the home crowd to air an old favourite: “Taarabt’s too good for you.”

As it turned out, there were no more reasons to reprise the song and Taarabt was replaced in the 63rd minute. “We did see glimpses of the brilliance that he has and I’m hopeful that when he becomes more conditioned he can show what he’s got,” said Ramsey.

Southampton were forced into a defensive re-shuffle after the left-back Matt Targett went off with a head injury from a clash with Matt Phillips. The 19-year-old was taken to hospital for scans but Koeman said he had been assured the injury was not as bad as feared. Southampton adjusted well and remained the more dangerous, especially Mane, whose speed made him a constant menace.

But Jose Fonte came closest to opening the scoring in the first-half, volleying against the crossbar following a corner from James Ward-Prowse.

In the second period, Rangers grew in solidity and confidence. Mauro Zarate curled a shot just over from 20 yards. In the 74th minute Joey Barton unleashed a strike from the edge of the area and Austin got a flick to it six yards out, forcing Forster into a superb reflex save.

In the third minute of stoppage time, Southampton swept forward and worked the ball wide to Maya Yoshida on the left. He fed Mane, who held off a defender and fired into the roof of the net from a tight angle.

Ramsey was left to perform a popular managerial routine and identify positives amid a big negative, one made potentially much worse by the sight of Austin
leaving the ground on crutches. “It gives a lot of hope to the owners and fans to see that at least players are trying to their best to keep us in the division,” he said.

A patchy performance against a very good side. Personally, I would have kept Adel on longer and there were some wonderful moments from him.

And when it looked like finishing goal-less, Steven Caulker gave the ball away in added time and the visitors went on to score. Then at the very death, we had the ball in the net only for it to be disallowed for offside, a foul or both?