Will this prove to be Harry Redknapp’s last stand? Losing to Manchester United was never, truly, going to decide whether Queen’s Park Rangers sack their manager but the nature of this defeat may have added further evidence as to why the club is considering a change.

Chasing the game, having performed with aggression, determination and desire, QPR needed some fresh impetus. Among the substitutes was striker Mauro Zarate, on loan from West Ham United because he was frustrated at his lack of first team action, and so surely his moment has arrived?

Instead Redknapp called for Niko Kranjcar. Zarate remained benched – and QPR eventually conceded the second goal that confirmed they would lose at home for the first time in three months.

Afterwards Redknapp said: “I’m looking to bring in a striker on loan. If I can get a striker we’ll be ok.”

It was the kind of strange statement that has frustrated the QPR hierarchy. Redknapp may argue Zarate is more a “number 10” but he certainly is a striker and one who has more chance of claiming a goal than other players on the bench yesterday and has led to serious thought being put to whether this is the right manager for a club that cannot really afford to be relegated,

QPR are no longer in the FA Cup so have two weeks to decide what to do. Tim Sherwood, the former Tottenham Hotspur head coach, is waiting but the club is unsure he is the right man for them.

Redknapp is convinced he will stay – or at least is saying that – and claimed to have the full support of chairman Tony Fernandes. It is not just Fernandes’ decision, however, as he is only one of four shareholders and that support for Redknapp might not be as strong from his fellow directors.

This defeat was damaging. Not because of the opposition, but because with QPR having such a terrible away record – 10 straight defeats – it piles on even more pressure for them to start picking up points on the road. And Redknapp compounded the frustration by admitting: “We are not a good counter-attacking team. We don’t have real pace in the team”. But whose fault is that?

He was not the only manager under scrutiny. United claimed the victory but it was not the most comfortable afternoon for Louis van Gaal. Given both substitutes scored, given he changed formation to improve his team’s fortunes then that would not appear to have been the case.

But the visiting fans chanted “4-4-2” at Van Gaal to criticise United’s 3-5-2 formation that simply was not working. “The main thing is that we have played in the first-half like Queen’s Park Rangers wanted,” Van Gaal said.

It was not a great improvement, though. United should have been ahead when Radomel Falcao, whose own future is in doubt with Van Gaal stating he still has to earn a permanent deal, being brilliantly picked out by Juan Mata. He brought the ball down deftly but elected for power in his shot and Robert Green parried – with the goalkeeper also blocking the follow-up.

“We created one chance in the first-half and I think Falcao has to score,” Van Gaal said. “I think in the second-half Falcao is also occupied three times with big chances.”

The Colombian certainly had opportunities with Green saving superbly, tipping away a close-range header, after the striker was found by Angel Di Maria.

Substitute James Wilson then crossed low for Falcao to sweep the ball home – or so everyone thought he would before Steven Caulker just got a touch to take it away from him. And then Falcao threw himself at another cross from Wilson which narrowly evaded him.

At least, Falcao’s supporters will argue, he was there, he came close and there was a semblance of a cutting edge from United. Falcao had not even made the 18-man squad for last Sunday’s defeat to Southampton.

There were some encouraging words from Van Gaal. “He wants to score goals and for me I have to judge how he has played,” he said.

“Scoring goals is an important aspect of a striker, I know, for me it is very important if he is an attacking point he can play further as a striker. And I think he did it well.”

Falcao was not the only striker who threatened. In front of a watching Roy Hodgson, QPR’s Charlie Austin was again brimming with confidence – forcing one sharp save from David de Gea with an angled snap-shot and then the goalkeeper excelled even further when he managed to push away a fierce, opportunistic half-volley from all of 30 yards after Wayne Rooney had lost possession.

Eventually a goal did come, just as United’s frustration was simmering. Rooney found Antonio Valencia and he pulled the ball back for substitute Marouane Fellaini to prod home sharply from 12 yards.

QPR tried to rally and pushed on with half-chances coming and going before, in injury time, Wilson ran clear. His first shot was blocked but he alertly collected the rebound to sweep the ball past Green and finish the contest.

“We get the maximum out of the players,” Redknapp later argued. QPR have to decide if that is the case. 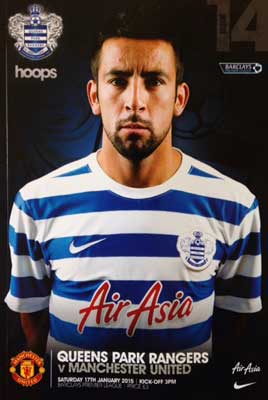 Nedum Onuoha had a very good game and Richard Dunne was playing well but was subbed for some reason after the interval? Rob Green was once again outstanding. He denied Falcao twice from close range in the first-half and made an outstanding save after the break.

David De Gea made an excellent save from Charlie Austin that was curling away from him. There were some absolutely disgraceful decisions from the officials and as usual Wayne Rooney was constantly in the ear of the referee (Neil Swarbrick on this occasion).

Generally the players battled and at the end there was a mixed fans reaction to Harry Redknapp as there had been to the introduction of Adel Taarabt. Redknapp had also brought on Niko Kranjcar but why was Mauro Zarate ignored?

Redknapp was later quoted as saying: “If we can get another striker in on loan then we’ll stay up no problem.”

The apparently elusive QPR hero Gary Bannister was a guest of the club as were members of Alec Stock’s family.