The game was played at Park Royal on 30th April 1910 and the following match report was written (from a Rovers perspective} by “Reservist”:

‘Save that Wake was absent from left-half, the home side were at full strength; but the Rovers were without two or three men.

The home defence played very strongly in the first ten minutes, but then for a spell of four minutes there was a succession of tricky exhibitions on the part of individual players on either side.

In these few minutes, extending to five, the Rovers attacked with real force. Roney had stopped a stinger by Steer, and twice Peplow had very nearly led to a goal at the other end. First passed to by Roberts, Peplow put the ball right in front of goal, but Corbett missed it within a yard or so of the line.

Then Peplow sent in a fast shot at a very acute range, which Shaw caught well. Later, troubled by Peplow, Fidler dropped across a shot which Shaw did well to catch under the bar. The back had, of course, tried to put to his goalkeeper, and he did so, but it looked very much at one time as though the goalkeeper could not reach the ball.

Shaw saved again from Laurie and in the first half of the opening 45 minutes the home custodian had three times as much work as Roney. At the close of this period, however, a dangerous centre from the left was jumped for by Roney and Steer right under the bar, Roney got it, and Steer, in coming down, struck his knee against the post and was injured.

But 26 minutes from the start Whyman scored with a great shot. The ball flashed inside the post, far away from Roney’s right hand, and, thought the custodian simply hurled himself along the ground he could not get to the spot in time.

Following their goal, Queen’s Park Rangers played up with great spirit, and both Whyman and Steer drove in fast shots at acute angles that missed. Once from a nice pass by Lawrie, Corbett sent in a stinging low shot, that Shaw stopped almost in the goal line.

Then Shaw watched round the post another shot by Corbett, and one by McColl, whilst a miskick by Fidler gave him something more to do. Fidler was kicking very hard, but with no direction at all – the ball went away anywhere.

Easily the most conspicuous half and most conspicuous forward on the home side in the first half were Hartwell and Steer respectively. Hartwell is something of a giant, with a very useful stride, and he generally had the best of his duels with Corbett. He was a tower of strength for his side and the amateur centre -forward was something of a terror. Hanging dangerously near offside he headed several great rushes upon Roney.

He passed well when going at top speed, and was the best forward on the field in this half, even though Whyman also passed well. The Rovers were not deadly in front of goal, and sometimes the ball was passed out to the wings when a first time shot would have been much more likely to have brought about the discomfiture of Shaw.

Taking the half as a whole, Queen’s Park Rangers all through had the better of matters, even though playing against a not very strong wind. The Rovers’ forwards did not continue so well as they played for patches in the first portion of the half, and it was unfortunate that Peplow was not given more opportunities, because he was not held and got the ball across well. Half-time: Queen’s Park Rangers 1 – Bristol Rovers 0.

During the interval the home side changed their colours, which rather clashed with those of the Rovers, and donned Navy blue instead.

Quite early, from a corner, Steer and Wentworth rushed Roney into the net – but not the ball – though it would not have mattered if they had, as the referee gave a free kick against the home forwards for fouling the goalkeeper.

Just afterwards, Williams got across and kicked the ball behind off the toe of Steer, who had only Roney in front of him. Then, from a fine centre by Peplow, Corbett put to McColl, who, with only Shaw to beat, at close range drove up into the roof of the net, but the referee struck the point off for offside.

After the first five minutes of the second-half, the Rovers were much in evidence for a period which lasted quite that length, but their old failing in front of goal prevented them from beating the very quick and safe custodian. Roney saved well from Barnes whilst Smart kept away Steer. 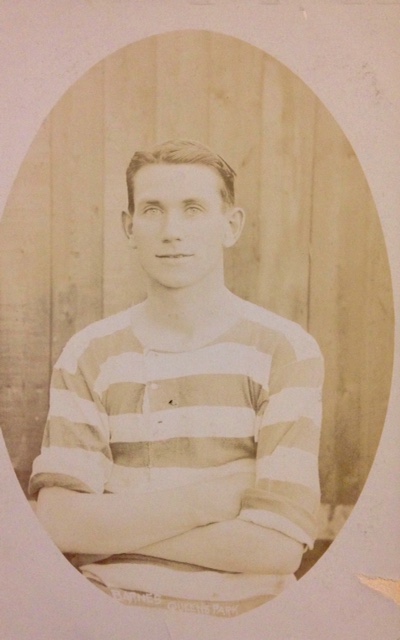 For another spell, this time lasting ten minutes, Queen’s Park Rangers were the aggressive side, but they found the Rovers’ defence very steady. Peplow was generally sighing for opportunities, and when he got them he nearly always made good use of them. That is what made it the greater pity he did not get more.

In the second-half, as in the first, he could not be held; whilst the prettiest inside forward on the Rovers’ side was clearly McColl, who occasionally had bits of fun with opponents.

As this is the last match of the season, a warning should be given – not a fresh warning, but a warning emphasising the warning that had been given over and over again. The Rovers, if they hope to do better next season – and they certainly do hope to do better – will have to show much greater deadliness in front of goal.

A few minutes from the close Ovens tackled Greer just inside the penalty area, and the referee gave a penalty. Mitchell took the kick, driving it to the right of Roney. Roney got his foot to the ball, but could not do better than slam it against the post, whence it shot into the net.

Scarcely had the game restarted then, at the other end, another penalty was given. This time it was against Hartwell, and the man brought down was McColl.

There was some amusement when Roney came up to take the kick, and Steer appeared to offer the Bristol goalkeeper good wishes. Roney drove up into the roof of the net, the ball touching the bar as it went in.

This is the end of the story. Queen’s Park Rangers won on their merits, for they had something far better of both halves. At the same time doubt must be expressed as to whether either of the penalties should have been given.

The Rovers defender Gilbert Ovens moved on to Chelsea later that year and was eventually transferred to the Rangers in 1911.

So that was the final game of the season – Brighton & Hove Albion topped the Southern League (Div. 1) table and QPR finished third behind Swindon Town.

(The above postcard is from my collection and features William Barnes)