Looking forward to my first visit to Damson Park/Autotech Stadium, the home of Solihull Moors FC, and hopefully progression to the next round.

Changing trains at High Wycombe I arrived at Solihull station on schedule. The recommended bus to the ground had been suspended and a Birmingham City fan offered me a lift on his bus to the town centre where I caught a taxi to the ground.

This was Billy Collings debut and Alan Barnes tells me that made him the seventh U18’s goalkeeper used so far this season. Only three Rangers subs were named on the team sheet and Reece Grego-Cox was spotted around the dugout but nursing an injury. 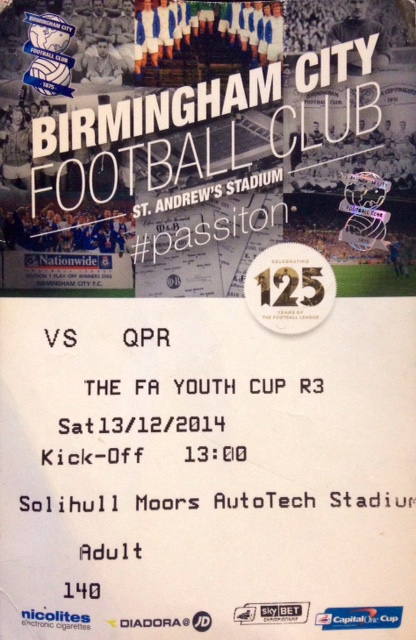 Within 90 seconds or so, Birmingham were awarded a free kick in a dangerous position just outside the left-hand corner of the box. I have to say that our wall wasn’t the best and Billy Collings was caught out as the ball hit the back of the net with ease.

The home side should have added a second but the ball was blasted over the bar from close range. One of the positive features of the match was George Butler’s corners, the first of which found Addison Garnett whose goal-bound header was cleared off the line.

Billy Collings made an outstanding save at the near post and the follow-up was belted well over. Andreas Komodikis was taking on the Blues defenders with some superb runs.

Another of Butler’s superb corners was headed over the bar and his next one was a carbon copy of the previous one. At the other end, a City player weaved his way through and went on to hit the post. Paul Furlong brought on Leo Donnellan at the expense of Trey Williams after 32 minutes.

Collings made another excellent save and then Komodikis twisted his way into the box but a strong block denied him, sending the ball out for a corner. Rangers had got better as the half progressed, but at half-time the score remained 1-0 to the home side.

Good start from the R’s after the break and our goal ten minutes or so into the half was well deserved and also outstanding. Finnish U18 international Nicholas (Niko) Hamalainen, curled a (Niko) Kranjcar type pass from our own half past a defender and out to Olamide Shodipo on the left-wing, whereupon he cut in and placed the ball in the corner of the net. Absolutely wonderful!

However, Birmingham soon scored their second after the referee allowed play to continue following a big shout for handball. Collings made a great save but Andrew Humphries then awarded a free kick outside the box for the previous incident. The kick was hit low, under the wall and deflected past Billy Collings.

Rangers continued to fight back and Nathan Corkery went through a number of defenders resulting in his shot being finger-tipped over the bar. What a goal that would have been! It was then Crichlow’s turn to evade 2/3 players in close proximity on a brilliant run but the shot went wide.

City were awarded a penalty after Tom Matthews had been penalised. Billy Collings managed to dive low and get a hand to the ball but it wasn’t enough to keep it out.

With a few minutes remaining, Birmingham scored their fourth from a counter-attack following a poor corner. Rangers still battled to the end and were the better side for much of the second-half.

Birmingham had recorded a 6-0 away victory in September but the score-line certainly flattered them on this occasion.

No sign of any buses back to town, so it was head down for the two mile or so walk back to the station.