The first of February is, as every school child in Ireland knows, St. Brigid’s Day, the first day of spring and almost every infant school class will have kids making St. Brigid’s crosses from rushes or straw over the past week.

This time around those good people in Ryanair chipped in with a e40 (¬£35) return fare for Dublin-London that coincided with the Burnley game, so a strong contingent of Irish R’s travelled over for the game. As I blogged previously, I also got the benefit of a ¬£14 (over 60’s) match ticket so this was a real low-cost visit. Most of the Irish R’s were travelling to Gatwick, but three of us arrived through Stansted.

It was anything but spring at 4.00am in Dublin with howling gales and torrential rain, but even arriving so early in Stansted the countryside was waking up to a lovely bright day. At the ticket desk for the Stansted Express, our good value approach on this visit continued with a special rate of ¬£20 each to cover return to the airport and flexible travel on the London tube. So the entire trip was costing only ¬£69 including flights, match tickets and all transport, happy days!

But there were conditions, the special ¬£20 ticket was subject to the three of us having to travel everywhere together at the same time on all transport options. If we separated then the tickets were invalid. What sort of people dream these things up?

Anyway, this resulted in some serious discussions on how to prevent someone getting separated from the group and costing us dear! It was suggested that we could hold hands on our journey through London, but I have to admit that I’m not quite that in touch with my feminine side. We eventually resolved the problem by agreeing that even if one of the party was comatose from alcohol poisoning, the other two would carry the victim through the ticket gates to ensure that we got value for our ¬£20.

Arrived in Shepherd’s Bush around half past nine and went looking for an unhealthy fried breakfast. The last time with John22 I’d walked down the Uxbridge Road, but didn’t find anywhere unhealthy enough, too many coffee shops and Panini houses. This time I tried the Goldhawk Road and walked into the Caf√© Rest, a traditional caf√©, run by good people named Hickey and with lots of good old R’s pics and Irish paraphernalia on the walls.

They also had a choice of a ‘Full Irish’ or a ‘Full English’breakfast for ¬£4.95 so we were still on the value trail. For the record, the difference between them in Hickey’s is beans and chips on the English version, which is replaced by white pudding and potato cake on the Irish one.

Moving on to the Crown & Sceptre, said hello to Mr Russell and Mr Kerrins as well as Irish Jack who was in flying-form, and then on to the match. This was the first time for me sitting in the Lower School End, where a big group of Irish R’s had arranged to meet up and it was just a perfect sunny spring day looking out onto the pitch before kick-off. Inkedupp and John22 arrived with finglasqpr and Qprmeath among others.

As you’d expect, John22 was giving out again about sausage sandwiches. Apparently he’d eaten some on the plane and had kept some for the train journey into London, but discovered that he’d left them behind him and the whole disembarking of passengers had to stop while people were being searched. The crew were sent back and eventually the sandwiches were, thankfully, retrieved. As I said before, John couldn’t go a whole train journey without food.

As for the game itself, others will be writing reports on how we played and how we inflicted damage on ourselves, but remember that it was St. Brigid’s Day, the first day of spring for Irish people, and for us sitting directly behind the School End goal, we were treated to a once in a lifetime experience close-up of Doyle and Dunne scoring for the R’s.

As inkedupp has described, the Irish R’s were “jumping and hugging like a group of girls at a ‘One Direction’ concert.” I’m beginning to worry even more about myself! Squeaky-bum time doesn’t describe the nerves at times, but a draw wasn’t the worst result in the end. 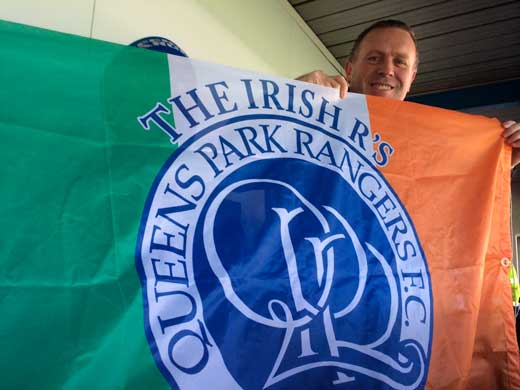 Back home at 11.00pm and absolutely shattered, but hopeful that we’d seen the first day of an Irish spring in Loftus Road and with high hopes that Kevin Doyle can breathe new life into our attack over the rest of the season.

Apologies for the long-winded view of the day, but we Irish R’s seem to want to turn into storytellers every time we have a pen, a keyboard or even a pint in our hands. I blame the education system.