The Derby manager, Steve McClaren, said his jubilant players had only enough energy left to muster a satisfied smile of success, such were their exertions in victory against QPR. McClaren’s side were ‘out on their feet’ in the dressing room after John Eustace’s first-half header gave them a 1-0 win over their Championship rivals to take them within a point of second place.

It was the first time this season that the Rams had beaten another team in the division’s top seven and the former England manager felt it was his best result since taking over at Pride Park at the end of September. “It’s probably the most satisfactory, yes, as it’s against a top-three team,” said McClaren, who spent three months as a coach at QPR prior to his appointment as Nigel Clough’s successor at Derby.

“Results like this can only be good for belief,” he continued. “Generally when you win a big game the players are flat out on their feet, flat on the floor in the dressing room. And it was like that. All I got was smiles.”

“When we first came in all we wanted was to provide excitement for the crowd and get to the play-offs, and we’ve done that. But that is still our goal. We’ve gone from fourteenth to fourth. The top three have been there all season, Burnley have been up there all season and the target for Leicester and QPR was always to get promotion. We need to keep collecting points and see where we end up.”

The game’s decisive moment came after 20 minutes when Rob Green came to punch away Will Hughes’ in-swinging corner, but the ball merely brushed his fist and was diverted into the vicinity of Eustace, who looped his header back into the far top corner of the net.

“Gary O’Neil said he was fouled,” said the QPR manager, Harry Redknapp. “I haven’t seen it again yet though, so I could be talking rubbish, I don’t know. But the ref has given the goal now, hasn’t he?”

“We didn’t create nearly enough chances, that was the problem,” Redknapp continued. “We didn’t press them in the first-half and we seemed more worried about them. We were better in the second-half but we didn’t create enough.”

QPR lack firepower with their leading scorer, Charlie Austin, and the winger Matt Phillips both out injured for the remainder of the season. Redknapp may pin his hopes on Manchester United youngster Will Keane to fire his side back to the Barclays Premier League. The 21-year-old forward has yet to feature since arriving on loan at the end of January, but Redknapp thinks that he is an exciting prospect.

“Charlie was our goalscorer wasn’t he, really?” he said. “He’s a big loss, and Matty Phillips is out for the rest of the season too. I may look at it (the loan market) but we’ve got Kevin Doyle, although he’s been out of the goals at Wolves,” said Redknapp.

“But I’m looking forward to seeing young Will now, he’s a good player and he will get his chance. It’s an area we might be a bit short in, but I feel we have a big chance (of promotion)”

Asked about his interest in signing Ravel Morrison on loan from West Ham, Redknapp said: “I saw that story earlier. If they want to loan him, he’d be of interest, that’s for sure.” 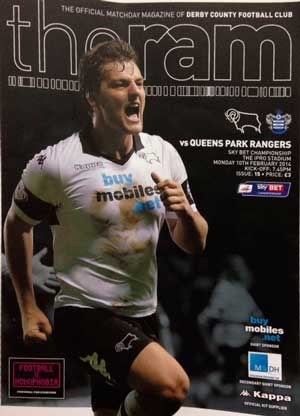 Harry Redknapp made three changes to our starting line-up. No Matty Phillips of course and Nedum Onuoha sat on the bench with Armand Traore. So in came; Tom Carroll, Gary O’Neil and Aaron Hughes made his debut for the R’s.

As we were still trying work out our game plan, Derby took the lead in the 20th minute from the head of John Eustace following a corner. Rob Green failed to effectively clear the ball and there was more than a suggestion of a foul on Gary O’Neil in the lead up to the goal.

Andy Johnson had a shot blocked and Gary O’Neil saw his header saved, but I did wonder what our game plan was? We let Derby frustrate us far too easily and we gave the ball away too often.

Junior Hoilett was thankfully introduced after the interval, but is he capable of playing for a full 90 minutes? Harry Redknapp also brought on Modibo Maiga at the expense of Andy Johnson.

Joey Barton had a shot saved, another effort was blocked and he proceeded to ping balls out to Benoit Assou-Ekotto. Our crossing generally wasn’t of much use to our strikers who were denied very little service.

The home side were getting away with murder at times, on and off the ball, which somehow evaded the attention of the match officials? The main target was Joey Barton of course and Michael Taylor really should have done something about it!

Jermaine Jenas came on for Tom Carroll in the 79th minute and a couple of minutes later Junior Hoilett had a very good opportunity but his shot went wide. Five added minutes was signalled, Assou-Ekotto had a shot blocked, but the score remained 1-0 to the home side.

My thanks to Aggressive Steve for the lift.