Tuesday night’s performance in the first 45 and last 15 minutes was not good enough and showed that what looks to be a strong side on paper is way off the mark in reality. What amazed me is that for the first 30 minutes of the second-half we, as usual, pushed 20 yards up the pitch and started playing at a higher tempo in the final third – result, we muller teams!!!

The first-half lacked any direction from ‘Arry & co, because it was obvious that Bolton were defending in numbers and very narrow so they were wide open down both flanks yet we didn’t exploit the opportunity.

Karl Henry, despite his great strike, is not good enough for this league and is a real liability in possession. Carroll, for a youngster, is so one-footed it’s embarrassing and when he plays in a two-man midfield he is vulnerable because he is lightweight. The match highlighted just how much we miss Joey Barton.

Bobby Zamora did his best in a farewell cameo, but Shaun Wright-Phillips? His touch and fall from Assou-Ekotto’s pass said it all! Regarding Assou-Ekotto, like Carroll, for a top player I am amazed that he can’t use his right foot – still he/we got away with it on Tuesday night, but Saturday will be a different story if he continues at right-back.

The positives were Rob Green keeping us in the game, Traore and Phillips’ wing-play in the second-half, Niko’s all-round game, Charlie’s attitude and AJ’s work rate. Saturday is a massive six-pointer so ‘Arry and Tone, a right-back, striker and centre-mid it is by Friday then. 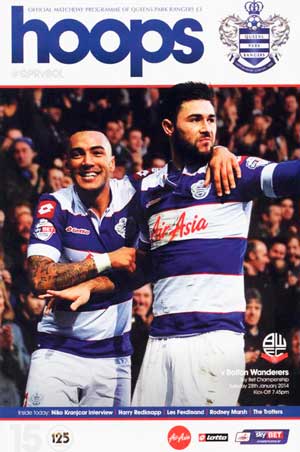 Have not been to HQ since the Leicester game and it seems that I have not missed much. A win is a win, and yes we have injuries, however we looked anything but winners. Indeed it’s hard to believe we are top of the table bar Leicester City.

No disrespect to Karl Henry or Tom Carroll who I’m sure will be a top player, but they give little confidence to both Dunne and Hill who looked decidedly shaky at times. Assou-Ekotto is top draw, but he is not a right-back. Andy Johnson ran all night, but achieved very little.

Disjointed, poor shape, tired and a real lack of confidence just about sums it up, how we miss Joey Barton. That said, some very good individual performances kept us in it.

Harry needs to strengthen in the next couple of days if we are to sustain a challenge, and utilise what we have on the bench.what to lose? It’s often said that the sign of a good team is playing poorly and yet still manage to get all three points.well we must be brilliant!

Benoit Assou-Ekotto started at right-back and within seconds of the start, Tim Ream went down with a nasty injury which held up play for a good four minutes until he was eventually replaced.

We gave the ball away far too often and I have to say that much of our first-half performance was poor. A hushed, anxious Loftus Road crowd watched on nervously as Charlie Austin received treatment for a shoulder injury and it looked at one point as if he was going to be replaced by Bobby Zamora who was all set to come on.

However, he soldiered on and we got our noses in front a few minutes before the break when he popped up to head in a fine cross from Matt Phillips. Earlier the visitors had hit the crossbar as a stranded Rob Green looked on.

A few minutes after the interval, Karl Henry received the ball in space and much to everyone’s surprise he looked up and drilled the ball low into the bottom corner from 20 yards. Just after that he was fed the ball just inside the visitors half which prompted shouts of ‘Shoot, Shoot’!

Charlie Austin was eventually hauled off and replaced by Bobby Zamora, who to be fair, had his moments.

Bolton still created chances and Rob Green made three fine saves within a minute or so. However, they did pull one back through Jay Spearing five minutes from the end of normal time.

Then Benoit Assou-Ekotto thwarted a dangerous counter-attack when he was forced to make a professional foul which could well have seen him booked by Andy D’Urzo.

A valuable three points, but losing Charlie Austin with that shoulder injury is very worrying to say the least!!!