The following match report appeared in the Willesden Chronicle on 22nd March 1957:

‘It took 5 policemen to lead an irate fan off the pitch at Loftus Road on Saturday after he had hit referee Mr B. A. Buckle of Peterborough in the back. The man leapt the barrier and raced on to the field seven minutes from the end when Mr Buckle was taking the name of Rangers right-half George Petchey.

This was the climax of a dour, uninteresting struggle between two teams who were all set for promotion. Ipswich won and they just deserved to, but, if they hope to reach the top of the table they will have to improve in all departments.

The game opened with both teams having an even share of the ball. Indeed the first 10 minutes brought some exciting and clever football but it was not a pointer to the remainder of the game. Rangers were the better side at midfield where Andrews and Rutter were providing their forwards with defence-splitting passes, but when it came to the goal area, Rangers were stumped. Balogun was “feeding” his inside men well but lacked penetration power and several of his close-range efforts lacked power. 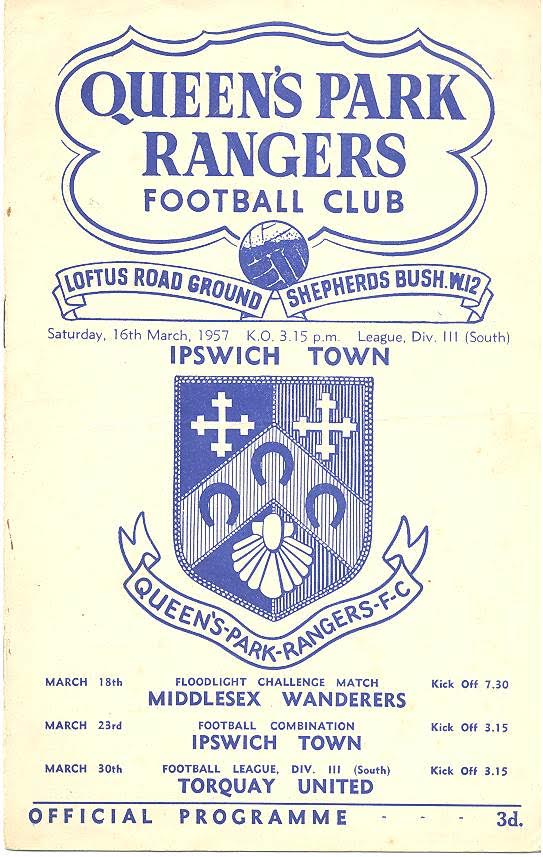 Play continued at a slow tempo in the second-half and it was not until the 69th minute that the visitors took the lead. Phillips sent in a weak shot which appeared to be going just outside when Archie Andrews stuck out his foot and deflected the ball into the corner of the net. Ten minutes from the end, Phillips leapt up to meet a high centre and head in a picture goal.

Phillips well deserved the ovation he received from the crowd, for 20 minutes after the interval, he crashed in to colleague Doug Millward and both players fell injured to the ground. Millward was taken off with a gashed mouth but Phillips gallantly carried on with his right arm hanging uselessly at his side.

As Mr Buckle left the pitch he was bombarded with apples and was helped into his dressing room by policemen who had a busy time keeping away an angry crowd.’

‘Will the Chancellor announce the removal of Entertainment Duty in his next budget ?’ questioned the programme editor who then goes on to give a breakdown of where the gate money goes. ¬£19 3s from every ¬£100 taken at the turnstiles went to the Chancellor and supporters were urged to write to their M.P.