Thanks to Declin for alerting me to a wonderful article by Rob Brennan that appeared recently in the ‘Irish Post’:

‘Outside of Donegal, the name of Gallen isn’t that common. But if you’re Irish, support QPR, live in West London or have an interest in soccer – it is familiar to you – it’s been the “Talk of the Town” for years.

When Tess met Jim Gallen at the Garryowen Dancehall, Hammersmith, in 1965, they could never have imagined the impact they were to have in the world of soccer. To have one son play professionally is rare, but to have three is remarkable.

Steve Gallen, QPR’s ‘Pro-Development Coach’, played professionally in England, Ireland and even had a stint in China. He preferred his old title – Youth Team Coach, but not one to moan, he has cracked on with the job – developing players and trying to get them ready for first-team action. 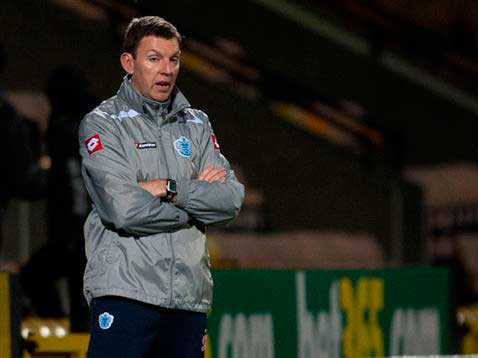 It’s clear when I meet him at the Concorde Club in Cranford, where the QPR youth team train, he is part of the fabric of the club. He welcomes me with a firm handshake and a typical “Are you well ?” Irish greeting.

Gallen talks with a West London accent – but he’s Irish. He points out that despite being born and raised in West London and married to Katie, an English woman from Hammersmith, his two children know what they are. “Connor, will be six on March 24 – he is Irish. Niamh is Irish as well, she is only two-and -half, but don’t worry, she knows.”

He goes home whenever possible: “Over the New Year we went back. We flew into Donegal. Then we travelled to Mayo, past Ballina and over to Bangor Erris. It was quite difficult with the All-Ireland final last year. We were split in our family. Are we Donegal ? Are we Mayo ?”

“My uncle, Kevin Campbell has a pub in Bangor Erris – ‘Talk of the Town’. We spent our whole summers in there. Most people support Manchester United and Liverpool over there, but his pub is QPR.”

Gallen knows the story of emigration well. It’s clear how much respect he has for his parents, and the start in life they gave their five children: Lorraine, Susan, Joe, Steve and Kevin. Jim from Meenreagh, Donegal and Tess from Taughna, Mayo, are still very much part of the Irish community in West London.

Gallen explains that they used to call Jim “Cloughie” after Brian Clough. He had his sons playing in his team. “Joe was U12, I was U11playing up and Kevin was like U9 playing up three years. In that team he was the worst player, but as soon as he went back to his own age group everyone was like ‘Wow.'”

Gallen has set me up nicely for the question Irish supporters have wanted to hear the answer to for years: “Why did you and Joe play for Ireland U21’s and Kevin play for England ?” He laughs. “I was wondering when that might come up.” I start to think that this could take a while and check the battery on the recorder is okay. It is, crack on Steve.

“When QPR had gone on tour in Ireland previously and played in Monaghan, I’d met Sean McCaffrey and I mentioned to him I was Irish. Next thing you know when I went back for a holiday it was a case of ‘Get in the car’. We drove down to Dublin where I met Maurice Price. I was called up to the U18 squad. Kevin was already playing for England schoolboys at that stage.”

“Then Maurice Setters and Jack Charlton wouldn’t leave me alone. I remember Big Jack saying, ‘Hey you, what about your brother ? What’s he doing playing for them ?'”

“We were in Latvia, the lift door opened and who is in there but Maurice and Jack. I just knew what was coming. Sure enough in the lift, Jack is on my case: ‘Oi you, your brother, what’s he doing playing for them (England) ?'”

“I told my Dad that Jack had been asking why Kevin was playing ‘for them.'” Gallen switches to Donegal once more. “Well you should have said, ‘You played for them yourself, Jack,’ but I couldn’t say that to Jack Charlton ! He was God, I was just…”

“Years later Kev tried to switch when FIFA changed the rules, but QPR were in League One then and it would have been difficult for Brian Kerr to bring him in.”

Gallen looks back on his time in the green jersey with immense pride. “Playing for Ireland at U18 and U21 level was unbelievable – a magnificent experience. The strange thing is, I’d only ever been to Dublin once before and I actually thought, ‘Am I the same as these lot, these are not my people, like in Mayo and Donegal, they are nothing like them’. For starters I could hardly understand them.”

So far Gallen has taken off Mayo, Donegal and Geordie, but his Dublin accent is without question his best. ‘You alriiigght, Gallo, Gallo, Gally, Gally…'”They have a different name every day for me. I was like, what are these guys talking about ?”

He estimates that 30 per cent of the QPR fan base has some link to Ireland. I ask how many of the players in the youth team can play for Ireland. “Too many. They are basically half saying to me, ‘Are you taking the piss ? How many Irish are at this club ?’ Because don’t worry I can sniff them out, I sniff them out alright.”

“You’ve got Frankie Sutherland and Michael Harriman who are in and around the U21 squad. Bradley Simmonds can play for Ireland. Jamie Sendles-White qualifies for the Republic and the North, his Mum is from Belfast. Younger down, Nathan Corkery, an attacking midfielder and Reece Cox, a striker, both play for Ireland.”

Gallen got his UEFA ‘A’ coaching license at Lilleshall. Roy Keane was on the course with him. Gallen had an interesting time with the former Manchester United midfielder. At some stage, Gallen wants to have a crack at management.

“In Championship Manager style, I would manage QPR for a few years, win everything and then go to Celtic and make sure they are better than Rangers. Then I will be the Ireland manager.”

Gallen still loves the Irish team, but thinks the glory days are gone. But he cherishes the memories he has of the 90’s and the 2002 World Cup. “Never have I been as happy as when Robbie Keane scored that equaliser against Germany in 2002. I was watching it at my house, me, Joe, Kev and Dad…”

After the interview, Gallen gives me a lift to Acton. En route he calls his wife Katie and asks to speak to his son and daughter, they are on the loud speaker talking and singing about Ireland.

Regardless of what division QPR are in next season, Gallen will be around. In what capacity, who knows, but if you’re in the neighbourhood you’ll soon find out. The Gallens have been, and continue to be, the “Talk of the Town.”‘