In this day of wall-to-wall football, with every conceivable game from almost every country on dozens of channels and all the other associated programming that goes with it, it seems weird that 25 years ago this very weekend there was great excitement about a football related programme on our television screens. Especially in our little corner of West London for our Queen’s Park Rangers were to feature in a documentary on BBC1, the nation’s most watched channel, of which at the time we only had four. 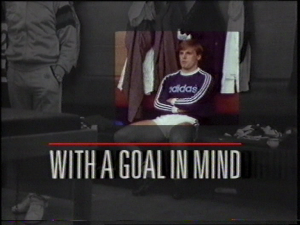 We featured in a programme called Q.E.D. which was one of the BBC’s flagship programmes which was aired from 1982 until 1999. The idea was for the cameras to follow our team, who at the time of filming were top of the old First Division, for a six-week period aided by a sports psychologist, John Syer. He was part of a psychology team called in to help the Spurs players in the 1981/82 season, ironically helping Tottenham against Rangers in that season’s FA Cup Final.

Rangers’ coach in this period was Peter Shreeves who was at Spurs as their coach during the early 80’s. I am sure it was through this connection that the programme came into being.

The documentary started with Syer chatting to the team about his methods at the team’s old training ground at Birbeck College in Greenford, Middlesex. Among the players were a young Les Ferdinand complete with moustache, Justin Channing, Gavin Maguire, Alan McDonald, Mark Dennis, Terry Fenwick, John Byrne and David Seaman. 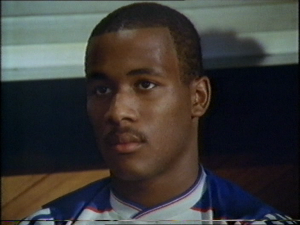 The psychologist proceeded to explain to the players that they must visualise forthcoming games and positive things they wished to happen in these matches – in words rather than pictures to the bemusement of the team.

A questionnaire was given to the players which the narrator then had the observation that writing out a questionnaire was alien to them, a bit of generalising there. Syer then gets the players to shut their eyes and visualise a skill that they would like to improve. This is quite comical with Martin Allen pulling a face that is comedy gold and then Terry Fenwick is unable to control a fit of the giggles. Upon being asked about their views on Syer’s methods, Martin Allen is the only one to put his hand up and states that he has reservations about the whole thing. 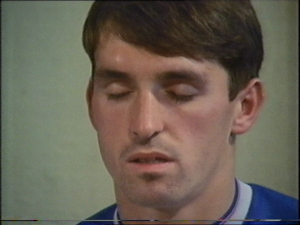 On the subject of visualisation, Dean Coney then tells the group that he often “goes to bed a lot thinking about it” which predictably generates much laughter from his team mates.

The documentary centres on Coney and Allen as the two main characters as Syer works with both players to improve one main weakness in their game. With Coney, who the narrator calls “Dixie”, the objective was to get him to feel more natural in beating a player on his right-side as he said that he always favours the left.

With Martin Allen, Allen said that he wanted to improve his speed. He envied the speed of Paul Parker and wanted to be more like him. On watching this I thought Allen must be living in a fantasy world as Parker was one of the fastest Rangers players that I’ve ever seen. Later in the documentary Peter Shreeves actually mentions that Allen would be better looking for other more realistic areas of his game to improve. 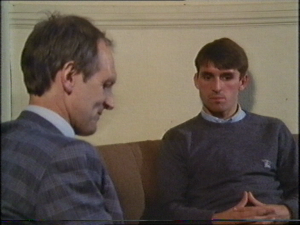 Footage was then shown of the game in October 1987, of the top of the table clash at Anfield against Liverpool. Sally Newman who was a sports reporter with the Ealing Gazette at the time was given the job of analysing the two players to see if they had improved these aspects of their game. It was basically footage of her in the crowd with Sally doing a voiceover. It seems really basic and dated compared to today’s state of the art analysis on the game.

After the match at Anfield, which we lost 4-0, Jim Smith with cup of tea in hand was waiting for the players in the dressing room with a pat on the back for each of them. He then pre-dates Ali G by stating to Paul Parker: “Anyway, we’re still top of the table, equal with Liverpool…innit” !! 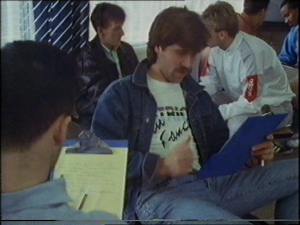 Smith comes across as an old school motivator type of manager, very similar to our current incumbent Harry Redknapp. The psychologist then calls a meeting at the ground in which the players, sitting in a circle, are told to give their marks out of ten for their “belief” at the time. We had just lost 1-0 at Bury in the league, I was there that night, it truly was a miserable performance. The players all gave 7’s and 8’s, then Peter Shreeves in Comical Ali fashion gave a 10 !

The players were then paired off to discuss recent results and what they felt could be done to improve things. It seemed at this stage that the answer was: “Get rid of the Sports Psychologist !!! We were top of the league before he came !

This inter-action is an interesting segment especially seeing David Seaman resplendent in denim and Gary Bannister with a tattoo on his upper arm, no doubt commemorating his two hat-tricks against Chelsea ! 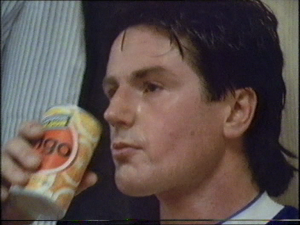 Jim Smith actively encouraged an open discussion with his players, but seemed to be taken aback by spokesman John Byrne’s assertion that the team seemed to run out of ideas, especially upon going a goal down and that we need to work on a “Plan B” in training, to paraphrase him.

Smith and Shreeves seemed to go on the defensive at the group’s comments with Shreeves commenting that we had three injuries so they had found it hard to work on different formations etc. He also said that it was down to the players to go to the management if they wanted to see new ideas, maybe an insight into Smith as to why we performed so badly in the 1986 Milk Cup Final…or maybe I’m bitter and will never get over it !

The next scene is remarkable by today’s standards in that we get to go into the home of a top-flight player. Martin Allen features again as he works out in his makeshift gym in his garage, with weights and a punch bag. He then casually strolls into his house and pours a cup of coffee with sugar ! What would Mark Hughes and his Sports and Science boys make of that ?

Martin had put up positive signs around his house, as the psychologist said earlier he wanted visualisation by words, not pictures. The one in Martin’s kitchen simply says: “Be nasty to win the ball, and composed in possession.” I’m sure opponents of “Mad Dog” over the years can vouch for the former !

The documentary ends with the R’s facing a trip to White Hart Lane. As you see the team pull into the Spurs car park they are all suited and booted, drinking tea from Styrofoam cups, not an isotonic drink or a pair of Beats by Dr Dre headphones in sight.

Rangers, wearing an interesting combination of blue and white hooped shirts, red shorts and socks, drew 1-1 with “Dixie” scoring our goal. The dressing room scenes after show captain Terry Fenwick seemingly delighted with the result whilst drinking from a can of Tango !…..that’s the way to “refuel”.

Jim Smith predictably, in conclusion to the documentary, says that he is delighted with the results of the experiment and that the players are now mentally aware.

It is a very interesting half-an-hour or so and shows how things have developed in the game in the last two decades, not only in terms of the mental side, but also the physical too. The days of cups of tea and soft drinks are long gone.

I can’t imagine a TV company getting this kind of access nowadays. It is very much of its time and a great historical document of our club though. I imagine we were mainly chosen due to our proximity to the BBC TV Centre, which ironically closes its doors for the last time this very weekend. 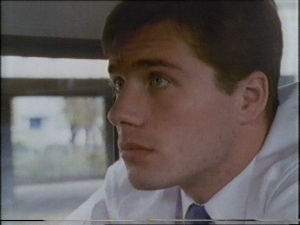 I hope to shortly get the full documentary on YouTube for everyone to enjoy. I imagine it will be of interest to many ex-Rangers players from that season as well, mainly due to their sartorial elegance!

During the six week period that this documentary was filmed, the record of Queen’s Park Rangers was: P6 – W1 – D3 – L2. This period was probably our worst spell of the season, maybe Martin Allen was right, you can over analyse things. 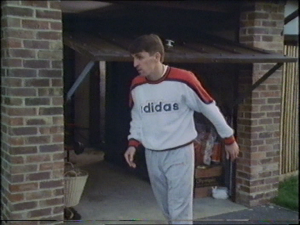 The season ended with Rangers finishing 5th in the old First Division, as London’s top club. Martin Allen left Rangers in September 1989 after making 154 appearances and scoring 19 goals. The main reason for his falling out with manager Trevor Francis was that Allen wanted to be at the birth of his child, whereas Francis wanted him to play in an away game at Newcastle in March 1989. Allen is currently manager of Gillingham in League Two.

Dean Coney left the club in March 1989 after playing 47 full games for Rangers plus another 15 as sub, scoring 9 goals. He moved to Norwich City where he suffered a career ending Cruciate ligament injury within a year of his move. He only scored 1 goal in his 17 appearances for the Canaries. Coney was last known to be working as the assistant-manager at Dagenham and Redbridge in League Two.