As a bit of a follow-on to Martin Percival’s excellent recent articles, Harry Brown wrote the following for ‘Soccer Star’, which appeared in the magazine on 3rd January 1953:

‘I was standing in the middle of a fog congratulating myself. Ever since I was a kid I’d always had an ambition to play for Arsenal. Like thousands of kids before, and since, I’d been a Gunners fan.

My ambition was not to play for England. Not to play in a Cup Final. It was, purely and simply to play for Arsenal. And on that particular foggy day, I’d achieved that aim.

Remember the day I’m talking about? The day that the Moscow Dynamos played Arsenal. Or rather took the field on the same day. For, on the day I achieved my ambition, the match should never have taken place.

I can’t remember a great deal about it – except that figures kept materialising out of the murky gloom and firing cannon balls at me! The worst of it all was that I never knew if they were going to shoot – or just pass back. Half the time I couldn’t see the colours. And those Dynamos were team enough to realise that long shots were the order of the day.

Twice during the game I started to dive one way – only to discover that it wasn’t the ball that was travelling towards me, just one of the players wandering around. What a day. And what a team.

In British football you get an idea of where the ball may be going. You keep an eye on the forward who is running, or edging, into an open space. But those Dynamos didn’t play that way. Every one of them was running into an open space for the whole ninety minutes. Super fitness was the keynote of their success. They started at top pace and kept it up all though the game. How did they do it? I reckon they were fed on jumping beans. 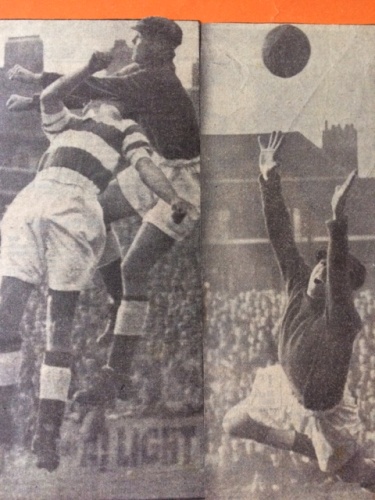 Never ask me which is the team that shook me most. The answer will always be the Dynamos. From teams down to individuals, and another greatest ever. This, of course, can only be a matter of opinion, but I think Tommy Lawton as the greatest player I have ever played with or against.

I was in his side when we were both at Notts County. To me he was then, and has always been since, the complete footballer. Nearest approach to Lawton at his greatest is – and this is again just my opinion – Nat Lofthouse.

Nat has come on a ton this season. Last year he was among the best in the land. This year I reckon he is the best. Now start arguing on that. He can shoot, dribble, use his head and forage for the ball.

But let’s switch back to Lawton for a moment. He illustrates perfectly a point I’d like to make. The difference between teams playing higher grade soccer in a lower league.

I’m in favour of a greater number of teams gaining promotion from the Third Division each year. It should be at least two from a division to give the better class sides in the lower leagues a better chance of getting to the higher grade of soccer.

There’s no luck about winning a championship. It takes steady, sustained effort. And sometimes that effort is not rewarded. That’s where the extra promotion place would help.

Although I advocate more promotion places I also reckon that it might be advantageous to cut down the number of teams in the big-time soccer.

Some of the struggling clubs would like to pay their loyal players the cash, but they’d dive straight into bankruptcy if they tried to carry their wishes out, So, year after year, they pay no benefits. Most of those I’m thinking about have no hope of paying a benefit.

Make no mistake about that. No club likes to sell star men. It disgruntles the crowd and it must keep robbing them of any hopes of higher-grade soccer. But when it’s a case of selling, or closing, well, you just sell and start looking for a replacement.

Soccer players, though, should be rewarded over and above their bare wages and/or bonus money. If the present bonus system won’t work, why not go in for more benefit matches? Like the cricketers who clear some nice packets in their county games for instance.

Biggest snag in the benefit match scheme is the inability to fit them into already crowded fixture lists, and the chances of star men being hurt, as Neil Franklin has been this season, and put out of action for lengthy spells.

All right then, if there’s not much chance of benefit matches – why not a levy scheme? Take from the rich, who probably wouldn’t miss it except from profit sheets, and give it to the poor – whose players look like getting a benefit under the present system sometime in the 21st century!

More help for the poor relations of the game should, in turn, help consolidate the sport even further. International matches, Cup Finals and semi-finals, special representative games, tournaments like the Coronation Cup, just a little bit from each would all help in the fight to give players greater security for when their days on the field are over.

I also agree with those among us who believe soccer officials should, to some extent, be recruited from players who have retired from the active game. Possibly there are some who would not, no matter how much coaching they were given, make the grade.

But there is a far greater proportion who would make excellent linesman and referees. And security is the most comforting thing anybody, soccer players and otherwise, can have.

That’s just one of the reasons why I save this often asked question to last. What’s the best thing that ever happened to modern soccer? No hesitation – the greater power now wielded by the Player’s Union.

For, in looking after the interests of the soccer player, they are, in fact, the best stimulus for the future prosperity of the game I play and love.’