On the 20th March 1920, the R’s took on Millwall at the Den. The following match report later appeared in the West London Observer:

‘Queen’s Park Rangers visit to New Cross on Saturday, where they shared the honours of a goal-less game and divided the two Southern League points at stake, provided one of the most exciting contests of the season, and the 26,000 spectators had very good value for their money.

There was a sharp contrast in styles, the Rangers, who had almost all the game in the first-half, showing bright, resourceful football, in which the standard was always high and combination excellent.

This was in a large measure due to the excellence of their half-back line, in which the personality of Archie Mitchell was always a potent factor, the understanding between the two departments being a valuable asset.

Millwall possessed neither of these advantages. The forwards had so little support that they scarcely troubled Merrick in the opening half, while after the interval, when the game swung round in a remarkable manner, Millwall’s attack was more enterprising than clever.

Broad was off his game, but Noble, Buck, and the newcomer Dempsey all showed resolute football, and Pullen and Wingrove had to be alert as the Millwall backs had been in the first-half.

The defensive work was quite a feature on both sides, the backs kicking strongly and tackling without fear or favour.’ 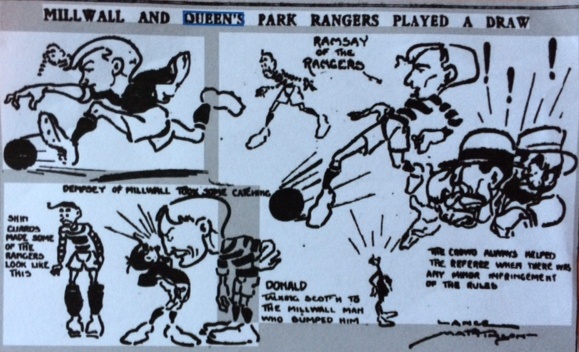 The Daily Herald also covered the match: ‘At New Cross 26,000 spectators saw Millwall and Queen’s Park Rangers gain a point each, as the result of a goalless draw.

It was a fast and vigorously contested game throughout. The Rangers played the more skilful
football during the opening half, and for some time Millwall were very hard pressed.

Bailey, however, was equal to all calls made upon him, and eventually Millwall did better, Pullen saving from Buck, with Merrick well beaten.

A fine struggle ensued to the interval, and although the Rangers forced five corners in quick succession, none of these was turned to advantage.

The game underwent a complete change in the second-half, Rangers being kept almost entirely on the defensive. Millwall forwards gave a dashing display during this period, and Merrick in the visitors’ goal was heavily tried. He came through the ordeal brilliantly.

Dempsey, however, had hard luck, following two splendid individual efforts, the ball on each occasion going just wide of the post.

In the last minute, Birch went near with a fine cross-shot. Rangers were without Broster, but Pullen re-appeared at left-half.’

The R’s went on to lose 1-2 at Kenilworth Road the following week.