‘Young keeper Chris Woods was blamed by his boss for giving Birmingham a point. “It was bad keeping,” fumed Tommy Docherty. “Chris was at the other post…probably phoning his old boss Cloughie.”

The Doc was annoyed that Birmingham scored at all, but the smile returned to his face when Rangers equalised. “I thought we had lost,” he said.

Legs eleven was the winning number in the Loftus Road promotion lottery. Birmingham’s No.11, Keith Dillon, seemed to floor Rangers and their hopes with a first-half goal, but several minutes into injury time it was the Rangers’ No.11, Steve Burke, who levelled the score.

Burke ran on to Clive Allen’s perfect through ball, drew goalkeeper Jeff Wealands before slotting home from the edge of the penalty area, and sent the London fans home happier than had seemed possible after Birmingham had dominated for so long.

“Sick”, was how Birmingham boss Jim Smith summed up his feelings. We’d have been happy with a point at the start, but we threw a second point away,” he said.

Rangers were especially edgy, passes went astray, headers were mis-timed and after the interval the electronic scoreboard was often in greater peril than the goal itself. The ball twice left the ground altogether.

Most of the Midlander’s menace came from fluent teamwork, so it was a surprise when Birmingham took a 35th minute lead through an individual effort. It startled the QPR defence too, none more so than Woods.

The keeper’s reactions were hopelessly slow when Dillon sent in a hopeful shot from 35 yards, and the ball sped between him and the near post.

Rangers improved gradually gaining some control in the middle of the field. 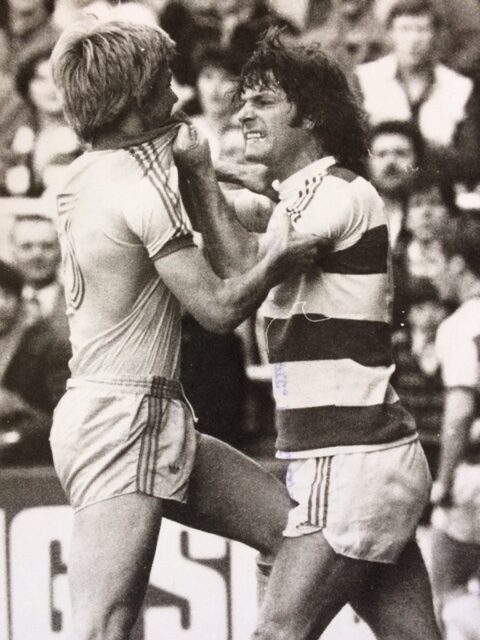 It was sometimes a bruising affair. Wealands and Martyn Busby clashed twice following corners. The Birmingham goalkeeper needed treatment in the 12th minute, and it was Busby’s turn for attention 12 minutes later.

Gallagher, who escaped with a lecture after kicking Allen from behind, was floored with a sprained ankle following a collision with Steve Wicks. Hampshire referee Alan Robinson was evidently in a lenient mood.

When Rangers’ Don Shanks and Birmingham’s Mark Dennis had a private punch-up, it nearly escalated into a free-for-all, yet both players escaped with a booking.

Rangers defender Bob Hazell, who has collected 48 disciplinary points, faces an FA Commission this week. He was left out of yesterday’s team. “After Thursday he could be out for five games, so we have got to get used to playing without him,” Docherty said.’

Rangers went on to draw their next three matches, 1-1 at Orient, 2-2 at Loftus Road against Cambridge United and then another 2-2 at the Valley.

(The press photo is from my collection)