The R’s made a decent start to their 1949/50 Second Division campaign. Following a 1-1 draw at Elland Road, Rangers then shared six goals with Brentford at Loftus Road and went on to beat Southampton 1-0.

Next up was a trip to Griffin Park on 31st August against a side who had thus far managed one win, that 3-3 draw at Loftus Road and a 1-4 home defeat to Tottenham on the opening day of the season. 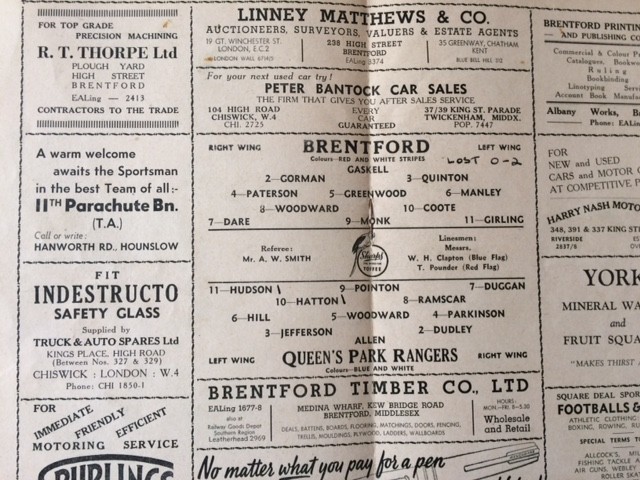 A few days later, the Rangers manager, Dave Mangnall, commented on the match in the Coventry City reserve programme:

‘What a grand tonic it was to see those three goals go into the net at Griffin Park last Wednesday evening. Yes, I know there will be some raising of eyebrows when that opening statement is read, but it’s true, even though the recorded result was only 2-0. Now read on….

Bill Pointon kicked off and play approached the Bees penalty area amid a roar which proved that at least half of the 26,000 (+) present were our supporters; for a short time, the play was fast, open and even, then our lads definitely took the initiative and it looked only a matter of time before goals came.

Then, six or seven minutes before the interval, the ball entered the net for the first time. Following pressure on the Brentford goal, a full-back played the ball with his hand, halfway inside the penalty area. Ted Duggan, who was on the spot, promptly banged it home.

The referee, thinking that it was Ted who had handled, awarded a free kick to Brentford, and despite the strong protests of all our players, refused to change his decision. Please don’t interpret my remarks as being a condemnation of the referee. It is very difficult for the official to see just what does happen in a split-second action, particularly when there are a number of players in the vicinity. All the same, it was a very lucky escape for Brentford.

In the second-half, it is no exaggeration to say that the Bees were well and truly overplayed. A grand Ramscar dribble, in which he left three opponents standing, and then pushed the ball forward just right for Cyril Hatton to get under control and score with a well-placed shot, killed any faint hopes which the home supporters had left.

Our second goal also emanated from a Fred Ramscar pass to Cyril Hatton, who in turn pushed the ball on for Stan Hudson to score with a grand left-foot drive.

Earlier in these notes I remarked about the unfairness of praising individuals. I excuse myself for mentioning players by name in this report, because I have done it in an effort to give those who were unfortunate enough not to be present at the game a clearer picture of events. The team won the match – every man jack of ‘em.

One very disappointing result of the Brentford game was the injury to Billy Pointon a few minutes from the end. He sustained a very painful ankle injury, the full extent of which is not yet known.

This is most unfortunate, because Bill has been playing at the top of his form this season. Supporters will unanimously join me in wishing him a speedy recovery.’

This away win was followed by two successive 0-0 draws, firstly at Coventry City and then four days later against Preston North End at Loftus Road.