He grew up as a Wednesday fan, but his first professional club was Sheffield United in 1959. Jim went on to play for the likes of; Halifax, Aldershot, Boston United and Colchester United, where he finished his playing career.

It was whilst Jim was at Boston that he took up his first managerial role. Jim then moved on to Colchester United where successfully steered the U’s to promotion from the old Fourth Division in 1974.

After that he had spells at Blackburn Rovers, then Birmingham City where he won them promotion.

Jim joined Oxford United in 1982 where he enjoyed great success. However, despite this, there was a fall-out with their owner, Robert Maxwell and he joined the R’s in June 1985. 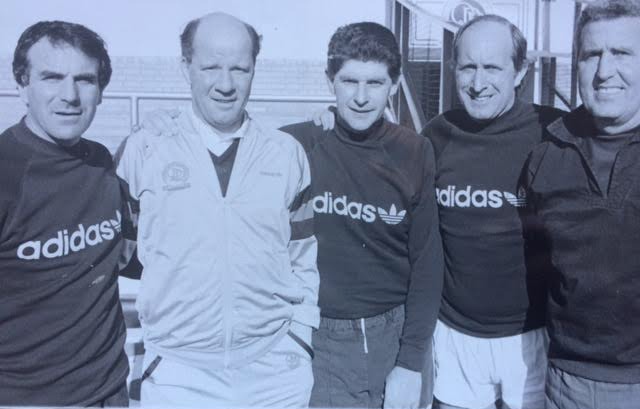 Rangers beat Ipswich Town 1-0 in the opening game of the season and in his programme notes: ‘Behind the Scenes’, Dennis Signy wrote the following introduction:

‘Introducing… 44-year-old Jim Smith, who became the “name” manager Rangers were seeking at the beginning of July. He left Oxford United after guiding them to the First Division for the first time in their history.

Why the switch? “I chose Rangers because it is a very well organised club with potential to be very successful in the First Division and, hopefully, in European football”, he told me.

At Sunday’s Family Open Day at the ground I asked if his initial expectations were being maintained. “Even more so,” he replied.

Those weaned at the Bush on the likes of Rodney Marsh and Stan Bowles will be interested to hear the Smith style for players – “positive, professional and skilful.”

Jim was a wing-half – what ever happened to wing-halves? – in his playing days with Sheffield United, Halifax and Aldershot.

As was obvious at the Open Day, Jim has been welcomed with open arms by Rangers supporters. A postcard from the Algarve from the “Lads in G Block” summed up the reaction to Jim’s decision to leave Oxford for the Rangers.

“There has been a big welcome from everyone”, Jim reports. “Now we are at the start of a vital season for football where everyone has got to show the best image for the game, from chairman, directors, managers, players, staff and fans.”

What impressed me, and I’m sure influenced chairman Jim Gregory when he interviewed Jim, was the number of times the word “skill” – crept into his conversation.

“Rangers have good quality players”, is his verdict. One other pointer – Jim likes wingers and is a firm advocate of attacking football and entertainment.

The arrival of Jim Smith meant a reversal to the caretaker role for Frank Sibley, the loyalist who held the reins after Alan Mullery’s departure last season. Frank, who always insisted he did not want the No.1 job again, is happiest coaching.

Rangers finished in thirteenth position and this was also the season of course when QPR got to the Milk Cup Final, but were defeated 0-3 by Jim’s former club, Oxford United.

The R’s finished the following season in 22nd place. On 28th February Rangers had taken on Manchester City at Loftus Road, but it was also demonstration day against the proposed merger with Fulham!

I remember Jim coming over to reason with R’s fans after we had invaded the pitch prior to kick-off.

1987/88 was a much-improved season for the R’s. Not only did QPR achieve fifth place, but they were also London’s top side.

In December 1988 Jim moved on to Newcastle United, whom he managed until March 1991.

His later appointments included; Portsmouth, Derby County and a return to Oxford United.