I recently picked up a copy of a letter that was issued by Ron Phillips on 27th November 1973 to all Football League Clubs:

‘We wish to inform you that we are prepared to receive offers for the transfer of the under-mentioned player:

This does not give you permission to approach the player direct. All enquiries should be made to our Team Manager, Mr G. H. Jago.’ 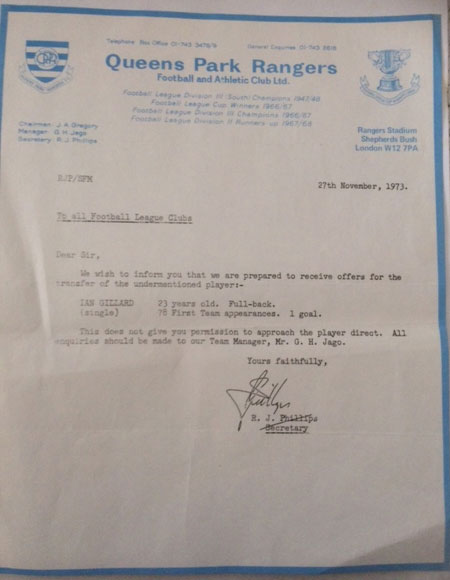 Initially, I have to say that I was surprised when I read that, so I familiarised myself with the Rangers line-ups for the start of the 1973/74 season.

Prior to that letter, Ian had made just the one league appearance, which came at Everton in September. The No. 3 position had been shared between Ian Watson and Tony Hazell.

However, Ian regained his place for the home game against Newcastle United on 22nd December and remained a regular until the end of the season.

He then rarely missed a game for the next eight and a half years, up to his departure after the end of the 1981/82 season.

His final match for the R’s was the FA Cup replay against Tottenham on the 27th May.