Peter Barnard wrote the following article in 1968 for ‘Goal’ magazine:

‘Epsom Station on any weekday morning displays its share of bowler-hatted City types waiting for the 8.16, and if one of them happens to break an ankle mowing the lawn he’ll still be on the platform next day, albeit sporting crutches.

But the stockbroker belt these days also numbers among its inhabitants a bare-headed young man who works in Shepherds Bush, not the City, and who might as well be on the dole as a pair of crutches. Because to Rodney Marsh, injury is inactivity.

The plaster is off Rodney’s left ankle now, and his return to work with Queen’s Park Rangers is not too far away.

But since he broke the bone pre-season, he has been finding out – for the second successive year – just what it’s like to be without the most important part of a player’s life.

“I love the game,” he says, “and it’s murder having to be out of it again like this. I missed the first two months of last season because of injury, and now it’s happened again. I’m beginning to wonder if I’m jinxed.” 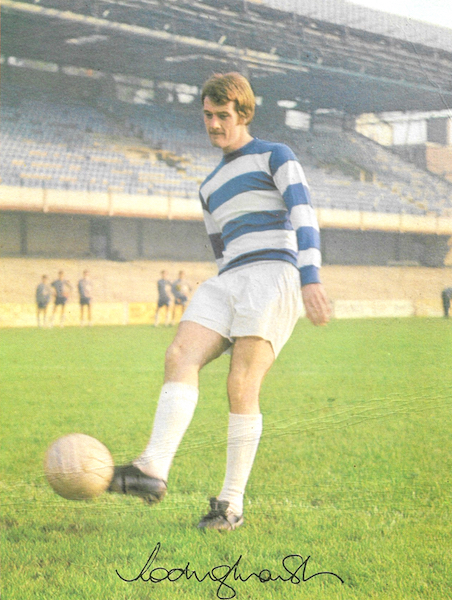 But moving north to White Hart Lane you can find another footballer, Martin Chivers, just starting an even longer lay-off from the game. How can the Spurs star fill the time?

Says Marsh: “I feel sorry for Martin, because he looks like being out for even longer than I’ve been. I think there are always things you can do at home, though exactly what depends on your interests.”

“I have an interest now that I didn’t have last year – our daughter Joanna, who keeps Jean and I pretty busy.”

“And the other thing that helps me pass the time is sketching. I do quite a lot of that, though not on a very ambitious basis. The nearest I’ve got to exhibiting anything is putting a sketch on the wall at home.”
“But the important thing is that it keeps me occupied, keeps me from going round the bend!”

Marsh took up part of his spell on the injured list by doing a sketch of Rangers general manager, Alec Stock, who was pleased to discover that Marsh is as good with his hands as he is with his feet.

There is one thing Marsh hates doing when he’s injured: “I don’t know about Martin Chivers,” he says, “but I can’t stand watching football. I’ve only been to two Rangers games this season, and I just sat there dying to get out on the field. It was terrible.”

Rangers’ form this season could not have eased that feeling one bit, and there is no doubt they desperately need ace scorer Marsh at the moment. How does he feel about the Rangers’ collapse?

“There’s no doubt that this terrible injury luck we’ve had has played a big part,” he says. “I’m not talking about myself – we’ve had so many players injured that the side hasn’t settled down.”

“What we need is a couple of good wins, then we’ll be all right. It will give the team confidence, which is the vital thing. But don’t forget the First Division is a tough place to be, and people mustn’t expect too much.”

“I believe that once we’ve had a season in this division to get sort of acclimatised, we’ll do really well.”

And the man who can play a major part in achieving that hopes to be leaving Epsom every morning from the START of next season. That has become one of Rodney Marsh’s ambitions.’

Rodney eventually made his comeback at Goodison Park on 16th November.

As for the R’s, relegation was to follow, managing just four wins and finishing bottom on just 18 points.