It was decided that Rangers fans would vote on the Club’s colours at the Football Combination Cup game against Reading at Loftus Road on 2nd April 1949. The following appeared in the match programme:

‘As supporters are probably aware, owing to the impossibility of obtaining blue-and-white hooped jerseys the club had no alternative but to get shirts with a blue body and white sleeves.

The supply position has now eased slightly and there is a possibility of getting blue-and-white jerseys for next season. Now Mr Supporter this is where you get an opportunity to voice your opinion.

Many letters have been received praising the new pattern, and an equally large number of supporters have written condemning the new strip; therefore the directors and management have decided to let the supporters decide which colours the team shall wear in the future.

Which is it to be? The smart shirt with a Royal Blue body, White collar and sleeves and bearing a QPR crest or the well-known Blue and White hoops?

Immediately after the ballot today for Cup Final tickets the old look and new look will be displayed. Which ever gets the biggest shout of approval will be the one adopted in the future.’

As for the match, Rangers won 3-1, with goals from: George Stewart, Des Farrow and Johnny Gibbons.

The attendance was given as 7,000 and the R’s line-up was: Saphin, Dudley, Reay, Nicholas, MacDonald, Tobin, Muir, Stewart, Gibbons, Farrow, Pattison. 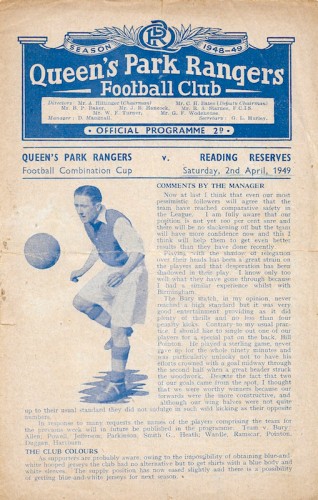 The Willesden Chronicle reported the following week that: ‘A record reserve match gate of over 6,000 spectators at the Rangers reserve game at Loftus Road on Saturday voted for the team to wear blue and white hoops, as their colours.

Shirts of blue and white hoops, and plain blue with white collars and sleeves were brought out in front of the Stand and the voting judged by the cheers each received.

Rangers Secretary Mr George Hurley said this week: “The teams will not be able to wear blue and white hoops regularly this season as we have not enough of that type of shirt available – but we shall be back in those colours regularly next season.”

The Chesterfield home programme on the 9th April commented as follows: ‘Well, the supporters – 7,000 were present – left the management in no doubt about the colours they prefer.

Blue-and-white Hoops got the unanimous verdict. Don’t, however, expect the teams to regularly turn out in the colours of your choice this season. The jerseys have to be specially made and this will cause some delay.

The set which the team played in v Bury, was a sample lot, they are all on the small side and very uncomfortable for some of our players to wear.

Blue-and-white Hoops it shall be, as and when we get the delivery of the new playing kit.’

3 thoughts on “The 1949 Fans Vote on QPR’s Colours: ‘Which ever gets the biggest Shout of Approval…’”