On 25th September 1964 I travelled to Loftus Road with some of my schoolmates, and as the match programme proclaimed: ‘Friday Night is Rangers Night’.

The R’s beat Hull City 2-1 that night with goals from Mike Keen and Billy McAdams.

The programme promoted a Supporters Association Grand Dance at Kensington Town Hall the following evening: ‘Come and Meet the Players, 7 – 11.30. Ballroom and Beat’.

The ballroom music was to be provided by Larry Macari, whilst the beat was courtesy of the ‘Alltones’.

Tickets were priced at 5/- and were available at the office under “A” Stand, from huts around the ground or at 105 St. Stephens Avenue. 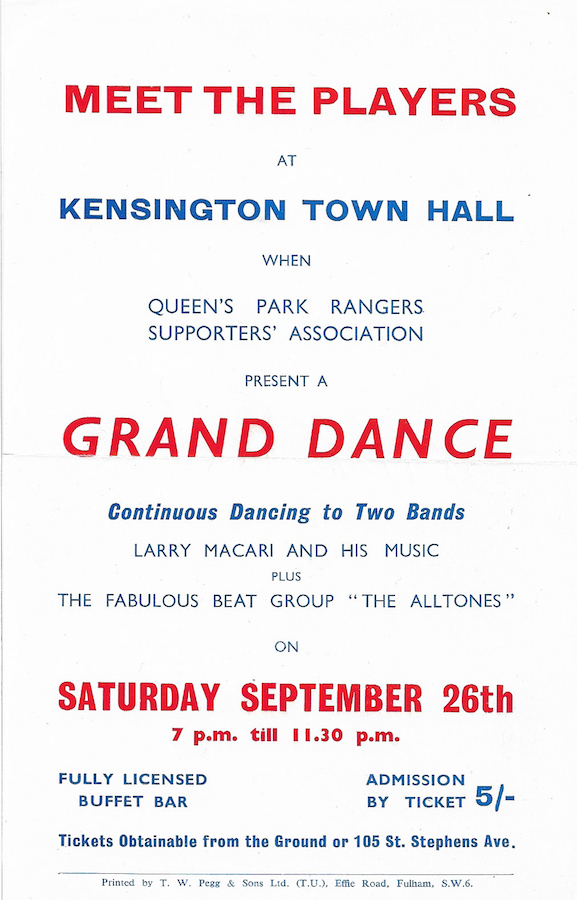 The subsequent Supporters’ Association programme notes (v Shrewsbury Town) reported that: ‘This dance and get together of Players, Directors, Staff and Supporters held last Saturday at the Kensington Town Hall was a wonderful success.

Over 500 enjoyed dancing to two bands. The general verdict was a very successful evening, well organised by the Committee under Chairman Charlie Jackson.

We hope this will be the first of many more functions, so if you are interested in helping in any of these social events, join the Association. Membership, including badge or year bar and fixture card, is 1/6.’

Elsewhere in the programme the ‘Club Notes by Ranger’ referred to a Pop group, without actually naming them, who had played before the Hull City game: ‘

Another “first” on September 25th was the appearance of our new Pop group who will now be appearing regularly at all first team matches.

They have been practising in the Rangers’ Club under QPR vice-president Reg Partington. All the members of the group are local lads and they will play for half an hour before every home League and Cup match for the remainder of the season.’

Maybe I got into the ground late and missed them, but I don’t remember a group playing that night? I wonder if it could have been ‘The Alltones’?

Please get in touch if you have any information regarding Larry Macari and/or ‘The Alltones’.

(The leaflet is from my collection)