Rangers won the Southern League (Division One) title in 1908, after finishing two points ahead of second-placed Plymouth Argyle.

A dinner was held at Frascati’s in Oxford Street, a restaurant described as ‘beautiful and sophisticated and known for its excellent international cuisine.’

The following article appeared in the Sporting Life on 28th May:

‘The Queen’s Park Rangers FC celebrated the winning of the Southern League Championship in the season just closed, by a dinner held on Tuesday at Frascati’s, Oxford Street, W., when there was a representative gathering, and the proceedings were of a thoroughly enjoyable character. 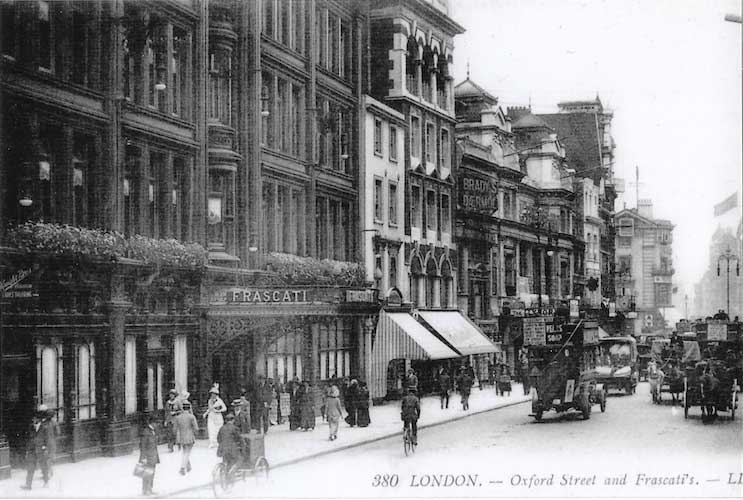 Mr J. H. Fielding, in proposing the toast of “The Football Association,” referred to the gigantic size of the Association and the enormous interests, which it controlled.

There are now over 10,000 clubs under the jurisdiction of the Association, and the labours of the members of the Council, to whom they were deeply indebted, must be both exacting and laborious.

The speaker concluded by referring to the football “split,” and said that for his part he was well satisfied with those who were at the head of affairs on the Football Association, and he had every confidence in their knowledge and judgement. Mr G. W. Simmons, in reply, also dealt with the subject.

“The Southern League” was submitted by W. L. Wood, who referred to the recent improvements, which had been made in the rules of the League, and it had strengthened its position as a result.

When, some two months ago, Tottenham, Hotspur and themselves decided to seek admission to the Football League, the position was very different in the Southern League to that of today, and he was not giving any secrets away when he said that there was then more than one member of the Southern League seriously considering whether they would continue their connection with that organisation.

With the improved outlook for clubs as a consequence of the changes, which had been made, there was a brighter future, and the League would be even stronger than now if the changes to be proposed at the annual meeting were agreed to.

Mr Moss (West Ham) congratulated the Rangers on having won the shield, and expressed the hope that their future successes would be even more pronounced than their past.

He was the more pleased at what they did last season because there were three local West Ham lads in the team.

The Southern League would watch with great pleasure the progress of the Spurs and the Rangers, in whatever league they might compete, even as they had been pleased to observe that Fulham, who twice in succession won the Southern League shield, had done so well in the Second Division of the Football League, having only missed promotion by so narrow a margin.

It was true that the Southern League should be managed on better lines, and rules would be proposed to bring about that reform, and if they were adopted it would help to make the League a greater force in the football world.

Alderman C. Pinkham, who proposed “The Club,” said the Southern League shield had been won by good play, good sportsmanship, and a grim determination to succeed.

It was admitted all round, including Plymouth Argyle, their keenest rivals for the honour, that the Rangers had won their merits.

Reference was made to the spirited policy of the directors and the valuable work of the manager, Mr Cowan, and he hoped that the former would continue to guide the destinies of the club as successfully in the future as they had in the immediate past.

The chairman, in responding, said that if the Southern League a couple of years ago had shown the spirit of progression it had manifested of late, he was certain Fulham would not have left it, and Chelsea would have been a Southern League club.

The S. L. reforms, however, were not sufficient, for the management committee must be altered, and other improvements effected, so that it might be a really serious competitor with any other football organisation in the country.

A few figures were given by the chairman which went to show that while at Park Royal there had been serious losses, the result of the removal to the new ground was that there had been a profit, and although the directors would have to guarantee the summer wages, they hoped to start next season with the incubus of debt removed.

Other toasts were given, and they were interspersed with songs and recitations.’

So this was to become one of the greatest ‘what ifs’ in Rangers’ history. Despite winning the Southern League and Tottenham Hotspur finishing in seventh spot, it was the latter who were elected to the Football League!