Reading had won 6-3 at Loftus Road on 21st August 1961 and then nine days later the R’s travelled to Elm Park. Mark Lazarus was sent off and the following statements surrounding his dismissal were presented at his hearing:

Statement received from referee J. Finney:
I have to report that I sent off the field, M. Lazarus (No.7) of Queen’s Park Rangers FC. The incident which came under my notice, was as follows:

I had awarded an indirect free kick against the right-half of Reading for obstructing Lazarus, who then ran behind the right-half and kicked him on the back of the leg.

Previous to this incident I had CAUTIONED Lazarus for making the following remark. “You are a fucking homer.”

Statement received from linesman F. E. Mapson:
After 15 minutes had been played in the second-half of the above fixture, M. Lazarus (No.7) of Queen’s Park Rangers FC was sent off the field by the referee for misconduct. The incident, which came under my notice, was that Lazarus deliberately kicked a player on the leg.

Statement received from linesman A. F. Mason:
I have to report that the referee, Mr J. Finney, sent off the field M. Lazarus of Queen’s Park Rangers FC for kicking an opponent. The incident, which came under my notice, was as follows:

15 minutes after the commencement of the second-half M. Lazarus (No.7) of Queen’s Park Rangers was obstructed by a Reading defender, he then deliberately kicked his opponent. 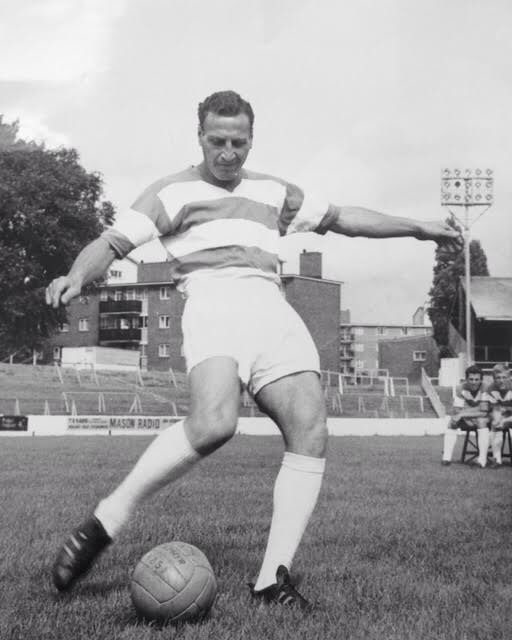 Statement received from player M. Lazarus:
Further to my being sent off in the above match, I would like to say on my behalf that the whole incident was provoked and that I did NOT kick R. H. Walker as stated by the referee.

Throughout the match Walker was coming across the pitch from the right-half position and obstructing or tackling me from behind.

In the home match at Shepherd’s Bush the first time he did this the referee warned Walker immediately and there were no further incidents.

Walker tackled in this fashion four or five times, the referee giving us free kicks on each occasion. On the fifth occasion I said to the referee: “Aren’t you going to do something about it?” The referee ignored me.

I then said: “You are a homer.” I did not swear. My name was taken and I was cautioned. Walker then started chatting to the referee at every opportunity and complaining that I was fouling.

Just after half-time I was fouled once again by Walker, the referee awarded us a free kick. I ran on past Walker, who then apparently collapsed complaining that I had kicked him. The referee then sent me off. I had definitely not kicked Walker.

Walker appeared in the tunnel after the match and apologised to me and he also spoke to a couple of our players, intimating that he was only “kidding” when he went down.

The Club are asking for a personal hearing and I feel it most advisable that Walker (R. H. of Reading) should attend.

Statement received from C. F. Wodehouse, Chairman of Queen’s Park Rangers FC:
This game was played in a fine spirit with one exception and should have been an easy match to officiate in.

Walker, the right-half of Reading who was tackling Lazarus in a most blatant fashion and had numerous fouls given against him, said to Lazarus in the tunnel after the match (and in front of me) “I am sorry, Mark.”

The referee appeared to be influenced by the crowd and biased against Lazarus who was turning in a five star display. I am very sorry to write in this fashion but these are the facts as my colleagues and I saw them.

Statement received from player P. Angell, Queen’s Park Rangers FC:
Reference M. Lazarus being sent off in the above match, R. H. Walker came into our dressing room after the match and suggested that he was “kidding” when he collapsed on the pitch.

A letter dated 22nd September, was then sent to the QPR secretary, John Smith:

‘I am writing to notify you of the following decision of the Disciplinary Committee which met at these offices on 20th September to give a personal hearing to your player M. Lazarus.

From the evidence adduced the Commission is satisfied that M. Lazarus of Queen’s Park Rangers FC was guilty of the offences reported and the referee was justified in the action, which he took.

The Commission has decided that Lazarus be suspended for 7 days from Monday next, 25th September 1961. Lazarus having asked for a personal hearing is ordered to pay the costs of the Commission.

Please notify the player of this decision and acknowledge receipt of this letter. The costs your player was ordered to pay amount to £24 9s 8d and I shall be glad if you will send me a cheque for this amount in due course.’

Mark didn’t play in the match at Watford on the 23rd September. In fact, his next league game for the R’s wasn’t until 24th February, in which, he scored two goals in the 4-0 win over Newport County.

(Thanks to ChrisPTenner for passing on copies of the paperwork)