On 10th May 1967, the Rangers reserves took on Southend at Roots Hall in the penultimate London Mid-Week fixture of the season.

‘Lively Rangers had this London Mid-Week league game at Roots Hall on Wednesday almost sewn up with two goals in the first three minutes.

In fact for the first-half hour they were so much on top that a cricket score appeared likely, but United weathered the storm and there was only a single goal margin between the two teams at the finish.

Keeper Ray White was at fault with Rangers’ first goal. He misjudged a back pass from Haynes and, as he fumbled on the ground for the ball, it was whipped from him by Wilks who ran towards the corner flag before turning and sending over what appeared to be a harmless lob.

Ray White, however, who had recovered his ground, palmed the ball into his own net in an attempt to clear.

There was no lucky tag attached to the second goal – a real beauty from centre-forward Leach from a Davies cross, the ball hit the iron stanchion with such force and speed, and rebounded out, that many fans were unaware Leach had got in his shot.

Then followed a hectic half-hour for the Blues with White pulling off some saves to atone for his earlier mistake.

Blues gained some confidence towards the break with Mellish and White (P), making individual sorties and there was no further scoring in the first-half. 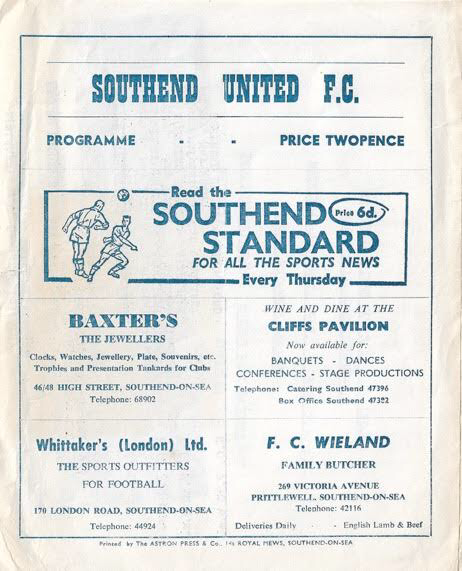 Ten minutes after the interval, Blues were back in the game with a chance when Mellish fastened on to a Haynes centre and pushed the ball on for Russell to net with a shot that went in off the far post.

Blues now threw everything into the attack but this proved their undoing as Wilks intercepted a pass in the United-half of the field and ran through unchallenged to score Rangers’ third goal.

United were rewarded for their efforts three minutes from the end when a Schooling free kick went straight to Mellish, whose centre was nodded home by Hymas to complete the scoring.’

Each of the nine London Mid-Week League sides played each other four times over the course of the season. QPR finished as runners-up, four points behind Millwall.