The 1939/40 season had kicked off the previous week when the R’s had taken on Northampton Town in a Football League Jubilee Fund match at Loftus Road.

On 26th August, Watford were Rangers’ opponents in the first league game of a season that was to be halted after just three matches, as the country went to war. 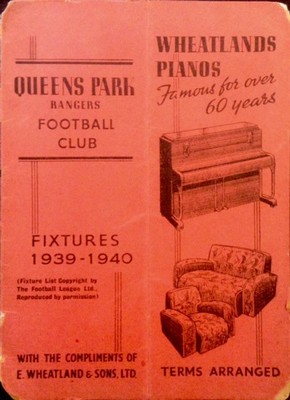 A report of the match appeared in the Marylebone Mercury the following week:

‘Dave Mangnall, former Millwall star centre-forward acquired by the Rangers during the close season, lived up to his reputation at Loftus Road on Saturday when he netted two goals in his debut against Watford.

Apart from Mangnall’s encouraging leadership, however, Rangers played poor football and the visitors were little better.

The game was indeed one of the poorest seen at Loftus Road for many seasons and although the first-half was fought out at a fast pace, the weather seemed to take its toll.

The second-half was full of aimless and haphazard kicking and Watford thoroughly deserved their point.

But for an amazing last-minute intervention by Jefferson, who kicked the ball off the line from a shot by Lewis, which had completely beaten Allen, Rangers’ youthful goalkeeper, Rangers would have lost and no one would have grumbled.

Rangers’ form was too bad to be true and they must play much better if they want promotion. There is no understanding between the various departments of the team – a point that manager Ted Vizard will have to rectify at the earliest moment.

Even Mangnall’s presence failed to stimulate the attack which, together with the half-backs, was all at sea.

Ridyard, at centre-half, was the most outstanding player in the defence. He, more than anyone else, kept the Watford forwards admirably led by Lewis, in check.

Reay, too, played well, although his placing and kicking left a lot to be desired.

Rangers took the lead when the game was only ten minutes old when Mangnall, who was given a few chances to shine during the game, drove home a pass from Bonass.

The quick success, however, was soon levelled by Watford when Lewis, a grand forcing type of leader, burst through the middle to beat Allen with a well placed shot.

For the remainder of the first-half, Watford were the better side and it was very much against the run of play, when with only a few minutes to go before the half-time whistle, Mangnall scored his second goal after collecting a “hope-for-the-best-pass” from the right wing.

Watford were soon level again when Evans netted from close range. This was the curtain for after both teams seemed content with a draw.’

“Linesman” wrote the following for the newspaper’s ‘Football Jottings’ section:
‘For two seasons, Harry Lowe has led the Rangers within an ace of gaining promotion, a feat they would no doubt have accomplished had luck been with them.

Now, however, the captaincy has been awarded to Dave Mangnall, who was signed during the summer in an effort to fill the gap at centre-forward which was so badly felt when Tom Cheetham was signed by Brentford.

I am not casting any aspersions on Mangnall’s ability. It was his grand leadership that helped Millwall to Division 2 honours and fame in the FA Cup, but at the same time he will lead players with whom he has never played for.

On the other hand, Lowe is popular with his team-mates and his leadership on many occasions has proved to be of inestimable value.

Manager Ted Vizard has given much thought to this captaincy problem. He has appointed Lowe vice-captain – or as he says, Mangnall’s assistant.

This is how the idea will work. Once the game has commenced Mangnall will concern himself with holding together the forward line, while Lowe will control the defence.

On paper the scheme looks sound but after the Rangers’ display against Watford on Saturday, it would appear as if something went “hay-wire!” The only bright spot in the tamest game seen at Loftus Road for several seasons was the fact that Mangnall, in his debut, netted the Rangers’ two goals.

His performance was all the more creditable because he had few scoring chances. ‘

Within a few weeks, this result along with the following two, were expunged from the records and the League suspended.

(My thanks to Colin Woodley for his assistance)