Taddy & Co. produced three sets of cards in their Prominent Footballer series. This latest one is the 13th QPR card that I have featured from the first series issued in 1907.

On the reverse side of this original card it reads: ‘A delightfully cool pipe tobacco, combining the sweetness and fragrance of the better class Virginia Tobaccos with the rich flavour of Latakia. Rather a full-flavoured, but an eminently pleasant mixture.’ 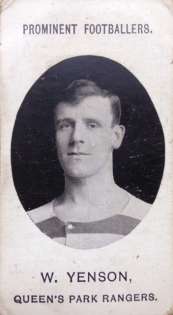 I previously featured William Yenson in this series back in October 2012. He was depicted on one of Cohen Weenen’s ‘Football Club Captains’ cards, which were issued in 1907/08.

He has also appeared on at least two other cigarette cards. Later, as a West Ham player and in 1910 there was the Croydon Common card, which was issued by Gallaher Ltd in their ‘Association Football Club Colours’ series.

William Yenson was born in Oxfordshire in 1880. There is some confusion regarding his Christian names as according to a census return years later he was registered as ‘Philip Owen Yenson’?

QPR signed him from Bolton Wanderers in 1905 and he went on to make 94 Southern League and FA Cup appearances for the Rangers, scoring 4 goals.

Yenson later returned to his former club, West Ham United, and then joined Croydon Common in 1909.