Taddy & Co. produced three sets of cards in their Prominent Footballer series. This latest one is the 12th QPR card that I have featured from the first series issued in 1907.

On the reverse side of this original card it reads: ‘A ripe, full flavoured pipe tobacco, fine cut. In a good well-seasoned briar or a well-coloured meerschaum it will be found an admirable tobacco.’ 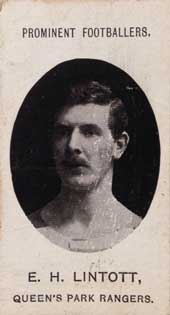 Evelyn Lintott was born in Godalming on 2nd November 1883. He was signed from Plymouth Argyle in 1907 and made his debut later that year against New Brompton on 7th September.

Although he went on to make just 35 appearances for QPR, he was the club’s first ever full England international, gaining the first three of his seven caps before moving on to Bradford City in November 1908.

Sadly he died on the first day of the Battle of the Somme. A letter in the Yorkshire Post described his final moments: ‚ÄúLt. Lintott’s end was particularly gallant. Tragically, he was killed leading his platoon of the 15th West Yorkshire Regiment, ‘The Leeds Pals’, over the top.

He led his men with great dash and when hit the first time declined to take the count. Instead, he drew his revolver and called for further effort. Again he was hit but struggled on but a third shot finally bowled him over.‚Äù