After receiving Roger Stokes’ text, I logged on to the Club’s website and their tribute read as follows:

‘The club has been saddened to hear of the passing of supporter and former employee, Malcolm Oakley.

Malcolm, 66, worked in the ticket office. He was also an ardent fan who picked up the club’s supporter of the year award in 2013 having not missed a home fixture in 50 years.

Malcolm was well known by many who follow QPR and will be missed by family and friends alike.

May he rest in peace.’ 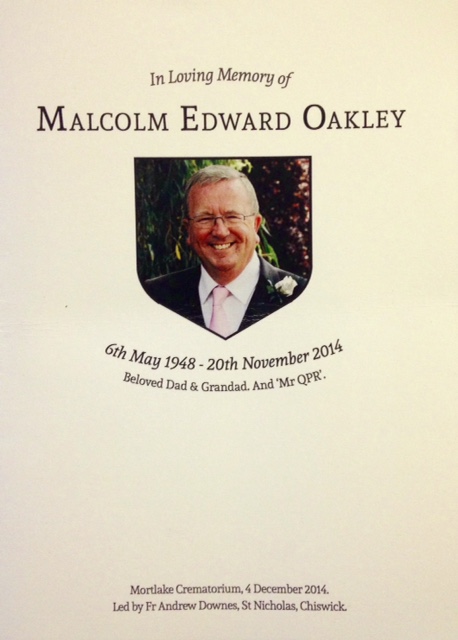 The first thing I did before the Leicester home game was to head over to the steps by the Box Office. As many will know that was Malcolm’s vantage point before matches. Whilst I was there, someone walked up and placed a photo with the flowers.

The players wore black armbands and a minute’s applause preceded kick-off together with a chant of ‘Loyal Supporter’. Well done to the Club and also to the Leicester fans for showing their respect.

There was a very large turnout at Mortlake Crematorium last week. Earlier, the hearse had paused briefly outside the Box Office.

The entry music was ‘Think of Me’ from Phantom of the Opera and together we sang ‘Jerusalem’. Following a number of poignant tributes and memories from family members, Fr. Andrew Downes suddenly produced a Rangers scarf as he conducted his Committal and final Blessing.

‘Foot Tapper’ by the Shadows was the final piece of music as we departed.

My thanks to Symon Eales for giving me a lift home.