The images shown below are taken from the Illustrated War News, dated 17th January, 1917. It’s titled: ‘A Royal Nurse and some of her Patients’ and the caption reads:

‘Queen Augusta Victoria of Portugal, who, with the young King and his mother, Queen Amelia, has displayed the most anxious care and sympathetic consideration for the wounded during the war, has now taken up duties in the Orthopaedic Hospital, Shepherd’s Bush, and, like so many other royal and noble ladies, is helping in the beneficent work of mitigating the sufferings of men wounded in the Great War.

Our first photograph shows the young Queen, who is a Lady of the Order of St. Elizabeth, in her ward in the hospital, wearing the uniform of the Red Cross, and surrounded by inmates and members of the ward. 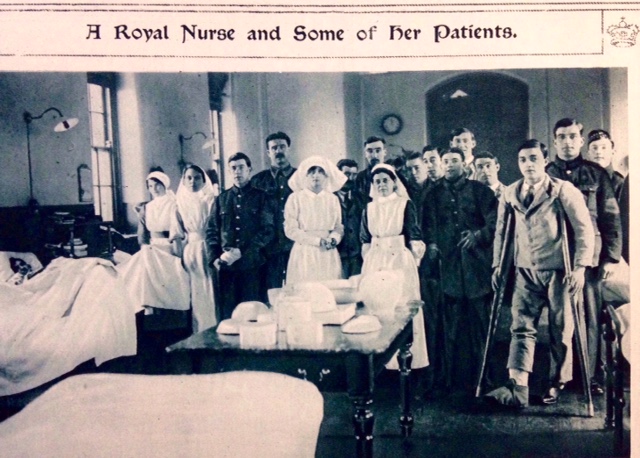 Photograph No.2 shows her Majesty practising bandaging: and in No.3 the Queen is again seen.’ 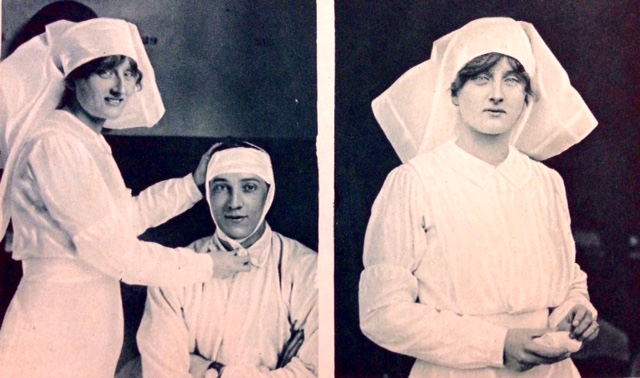 The hospital in Du Cane Road was was originally an Infirmary and Poor House.

The War Office took it over in 1915 for the treatment of wounded soldiers. It soon gained a reputation as an orthopaedic hospital and the following extract appeared in: ‘Times History of the War’ and comes from the superb booklet: ‘Around the Bush – The War Years’:

“The great orthopaedic hospital at Shepherd’s Bush, over the work of which Sir Robert Jones presides, was indeed one of the most interesting and inspiring places in London.

In its evolution many agencies played a part, the British Red Cross Society and the Order of St. John being the most important of these. These voluntary bodies had early recognised the importance of the work of caring for the disabled, and appointed King Manoel, the former King of Portugal, who had taken a deep and personal interest in the new military surgery from its earliest days, to represent them at Shepherd’s Bush.

They placed their resources at the disposal of the wounded men, and, as will be shown, contributed in great measure to the success of the enterprise.

The first impression which a visitor to the hospital received was one of great pity. Its wards, like all hospital wards during the war, had many a sad story to tell, and the condition of some of the poor fellows on admission was such to shake the strongest confidence.

It seemed indeed, beyond the bounds of possibility that useful limbs could be re-shaped from helpless flail-like arms and shrunken legs, or that men who appeared to have lost all power of movement could ever be restored to activity. That impression, however, soon passed away, giving place to a growing sense of wonder.

As department after department of the great building was visited, the truth came home that there is practically no limit to possibility so far as the orthopaedic surgeon is concerned. For almost every problem he can, if given time, devise a solution.”

In 1919 it became the Ministry of Pensions Hospital and seven years later the site was known as Hammersmith Hospital.

2 thoughts on “From 1917 – Caring for the Wounded at the Royal Orthopaedic Hospital, Shepherd’s Bush”