Glenn Roeder was suspended and was replaced by Warren Neill. Tony Currie took over the captaincy. Unfortunately Clive Allen was still injured so Gary Micklewhite started in his place. Albert Sewell wrote the following programme notes: 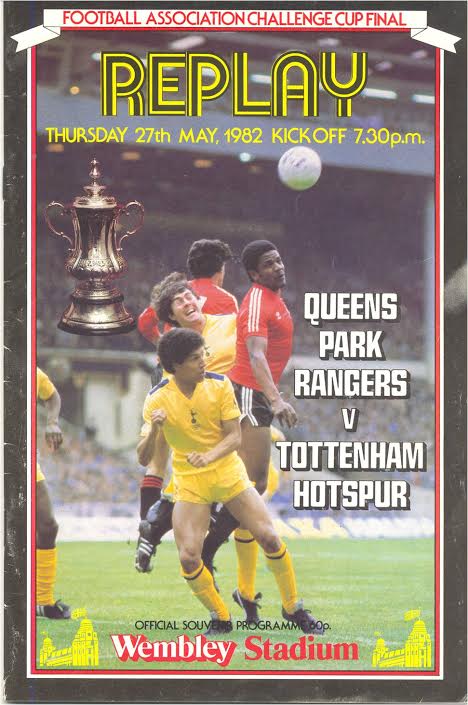 ‘The continuation tonight of Wembley’s 54th FA Cup Final is Tottenham’s 66th match of the season and Queen’s Park Rangers’ 55th, and becomes the first of the of the four all-London Finals to go to a second match. A few days’ rest will have done wonders for most of Saturday’s damaged, bruised and tired limbs and, whatever the score after 90 (or 120) minutes, we are sure to see the trophy presented tonight. The drama of the first match began some weeks before as Tottenham’s success on numerous fronts presented the inevitable problem of a fixture backlog plus a succession of injuries to key players. It was not until Saturday morning that the final decision on the Spurs side was made, as captain Steve Perryman, Ray Clemence and Tony Galvin were declared fit to play.

For Queen’s Park Rangers, promotion was a distinct possibility. First the re-awakened giants Sheffield Wednesday fell away…then the young Leicester side who themselves came close to a Final appearance. But promotion was not to be and in their week before the Final, Rangers were able to relax and look forward to the big day, free from selection doubts. Yet the injury problems which Rangers had previously been able to avoid caught up with them, here under Wembley’s heavy sky…..’

His article concludes with a brief match report. Frank McGhee’s report appeared in the Daily Mirror the following day:

‘Queen’s Park Rangers did everything to rescue the 1982 FA Cup Final from mediocrity – except win it. They completely outplayed their conquerors Tottenham in last night’s replay at Wembley. They had a clear penalty appeal rejected. They hit the bar. They had a shot cleared from the line. They brought Tottenham’s great goalkeeper Ray Clemence as close to panic as he has ever been in his distinguished career. But somebody up there did not love them last night.

The match was only six minutes old when Spurs went in front from a Glenn Hoddle penalty. It was conceded in desperation by a wild, blatantly illegal tackle from Rangers captain-for-the-night, Tony Currie, on Tottenham’s Graham Roberts. Currie had little choice. His colleague Simon Stainrod lost in midfield the ball which sent Roberts on his run at goal. Hoddle’s right-foot shot from the spot kick, low and hard to keeper Peter Hucker’s right, was a mere formality.

Already, inside the first half-hour, the match had become a far more exciting and competitive spectacle than the crowd endured last Saturday. A reflection of the public attitude towards the replay was that tickets were on sale at the turnstiles before the match – and I can’t remember that happening in my previous long experience of Cup Finals. But 90,000 still turned up, paying more than ¬£600,000 to bring total receipts for the two games to more than ¬£1.5 million. The crowd did at least get some of their money’s worth in excitement and action last night – and the depleted Rangers team played a full part in providing it. 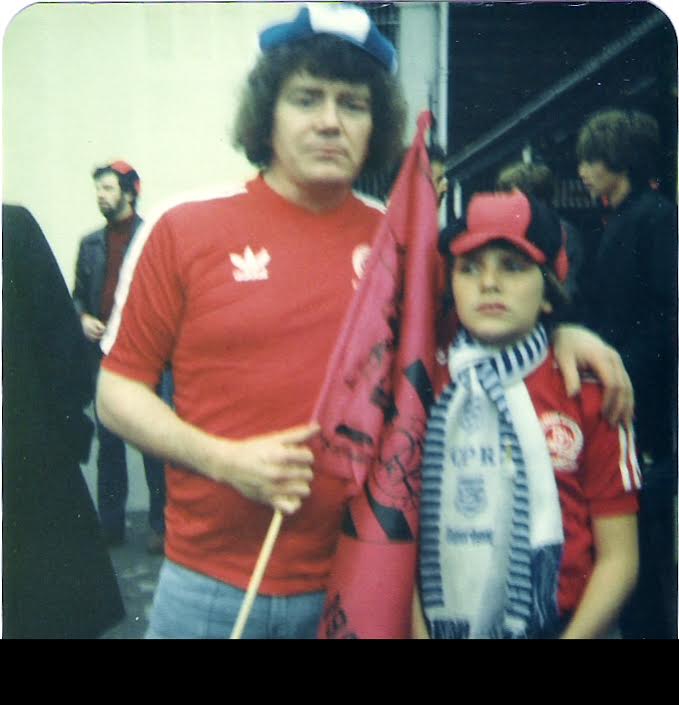 Right-back Warren Neill, the teenager in a re-shuffled defence, sent Mike Flanagan on a run from the right that finished with a shot well wide. That captured the worst feature of the game – the lack of an accurate finish by either side. Although the midfield play was bright, lively and busy from both teams, it was 30 minutes before a player on either side managed another shot at goal. Ray Clemence had to move sharply to gather an effort from Stainrod. The only other incident of real note was when Currie was harshly flattened by a Roberts tackle. But that did not prevent Rangers from having the better of it until Hoddle at last started to exert some midfield influence.

After a cruel foul on Gary Waddock which brought Tottenham’s Paul Miller a well deserved booking from referee Clive White, Rangers had the ball in the net from a shot by Micklewhite – but Stainrod was so blatantly offside at the time there wasn’t even an argument.

Rangers started the second-half in the mood they had ended the first – undismayed by Tottenham’s lead. But they missed a glorious chance of equalising in the 48th minute when Micklewhite found Stainrod unmarked at the far post with a little beauty of a cross. But Micklewhite couldn’t help displaying his disappointment when Stainrod headed wantonly, wastefully high. Rangers’ pressure increased, with Spurs keeper Clemence stranded yards from his line as Hoddle cleared from under the bar a cross from John Gregory that was floating towards the net.

Rangers should, in my opinion, have had a penalty of their own when Garth Crooks cut down Terry Fenwick. But although the linesman signalled frantically and Rangers players appealed frantically, referee White remained unmoved. Spurs were under intense pressure. Clemence was lunging and plunging like a beginner at the game to make desperation saves from Stainrod and Waddock, with only one brief interruption of attacking action from Tottenham. That was in the 55th minute, when Hazell slipped to let in Archibald, who forced Hucker to a fine, sharp save. 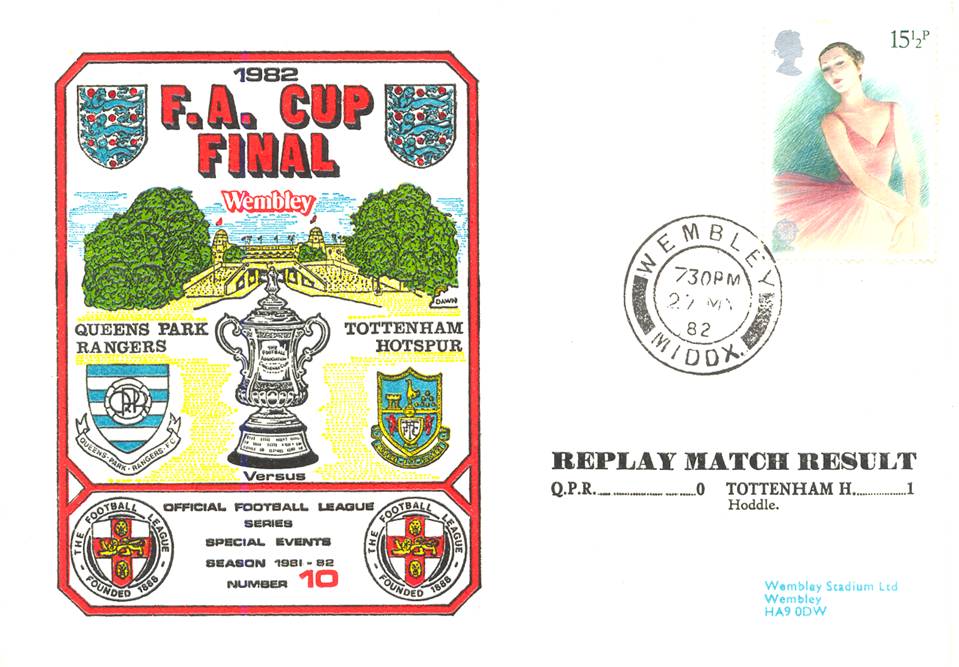 But Rangers went even closer in the 63rd minute when Gregory clipped the top of the bar after a pass from Stainrod. Tottenham’s composure was in tatters at the time, which is probably why Spurs brought on Garry Brooke for Mike Hazard.’

A much improved performance from the R’s, particularly in the 2nd half, but it wasn’t to be. I walked to Sudbury Town Station to pick-up the Piccadilly Line. Walking and talking to other R’s fans in my distress. I was proud of our performance, but we deserved to win. Ball cleared off the line, clipped the crossbar and the referee even overruled the linesman on one occasion after Fenwick was fouled in the box ! Somebody up there didn’t love us that night !

(The middle pic shows a gutted father and son (Chris Guy with his dad) after the game. Thanks to Chris for sending me that. The other pics are of memorabilia from my collection)