Rangers had won the first leg of this UEFA Cup tie at Loftus Road two weeks earlier 4-0, in the clubs first ever competitive game in Europe, with a Stan Bowles hat-trick plus one from Don Masson. The away leg against the Norwegian part-timers SK Brann was therefore expected to be a formality. Norwegian football at the time was not of the standard it is today and this was only Brann’s second season in European competition, having been beaten by Glentoran in the European Cup Winners Cup three seasons previously. 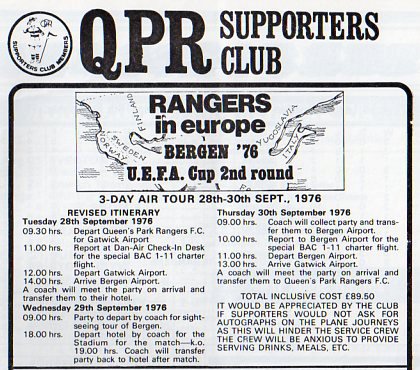 Norway nowadays is one of the most beautiful, but also one of the most expensive countries in the world to visit and it was little different in 1976. The club arranged a Dan Air charter flight to take the players to Bergen, the second largest city in Norway, located on the west coast amongst the fjords, and the Official Supporters Club arranged for fans to travel on the same flight. The total cost of the package trip, including the flight and two nights in a hotel, was ¬£89.50. Over 35 years later that sounds reasonable but, just to put it in perspective, return train tickets for one of the furthest domestic away games that season at Sunderland was ¬£6.40. The trip cost a lot of money by 1976 standards and of course 3 days off work were required at a time when 20 days paid holiday per year was regarded as generous in the UK, with many employers granting far less.

Robin Haldane, still a regular Rangers fan home and away who recently shared with me his memories of the trip, planned out his annual leave in the summer of 1976. Allowing for 3 days per game, if Rangers were to make it all the way through to the UEFA Cup Final that would mean 18 of his 20 days leave would be accounted for. This did not even allow for any time off to travel to any midweek domestic away games either. Now it may seem to have been fanciful thinking for the fans of a club to hope to make a European final in their first ever season in European competition, but this was, by and large, the same team that had finished runners-up to Liverpool the previous season and who had been playing (and generally beating) some of the very best sides in Europe in the friendly matches scheduled by Dave Sexton since he had taken over as manager from Gordon Jago in October 1974. These victories included wins over Red Star Belgrade, Moscow Dynamo, Benfica and, probably the best win of them all, 4-1 in Germany versus the reigning UEFA Cup holders Borussia Monchengladbach in July 1975, a match featured in July 2010 by Indy R’s: 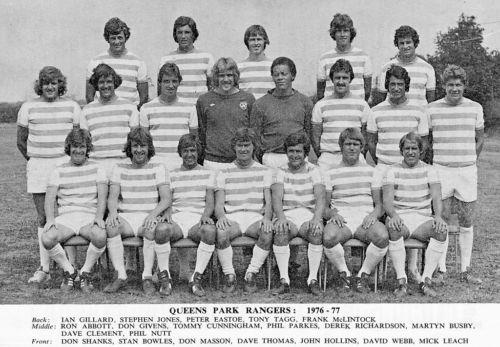 There was a real feeling amongst the Rangers support that this was a team built for European football and now they were to get their chance to really prove themselves. Ironically one of the few defeats versus European opposition in friendlies was 1-0 away to Brann in Bergen in May 1975. 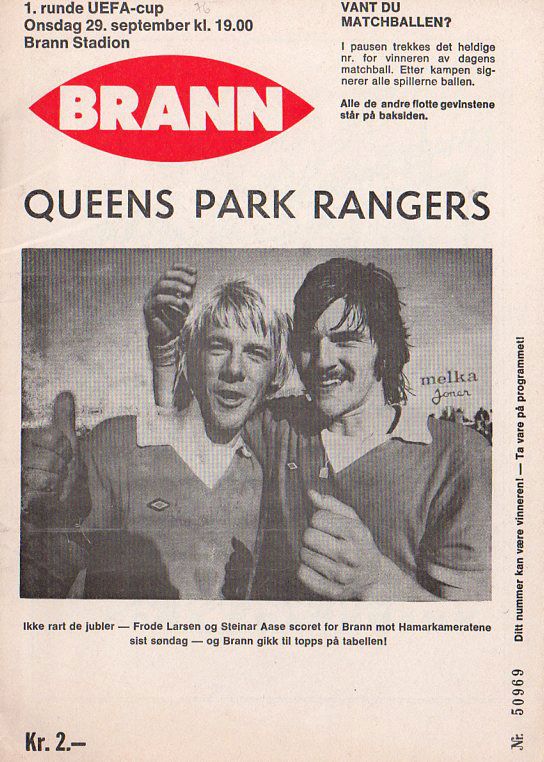 The Official Supporters Club organised the trip and around 150 fans travelled for Rangers first UEFA Cup away game on a BAC 1-11 plane from Gatwick. Many fans, including Robin, had to apply for passports for the first time as foreign travel was still relatively unusual. Alan Barnes was not happy about having to fly, something he shared with Stan Bowles, but Alan was not going to miss Rangers first away game in Europe….and it was certainly not an option for Stan either !

After arriving in Norway, Robin had a meal with another Rangers fan named Derek who still travels away and the next morning he went for a walk in the hills to a lake, near to the hotel where the Rangers fans were staying. During a 3 hour walk not one other person was seen – a far cry from what Robin was used to back home in Earlsfield in South London ! 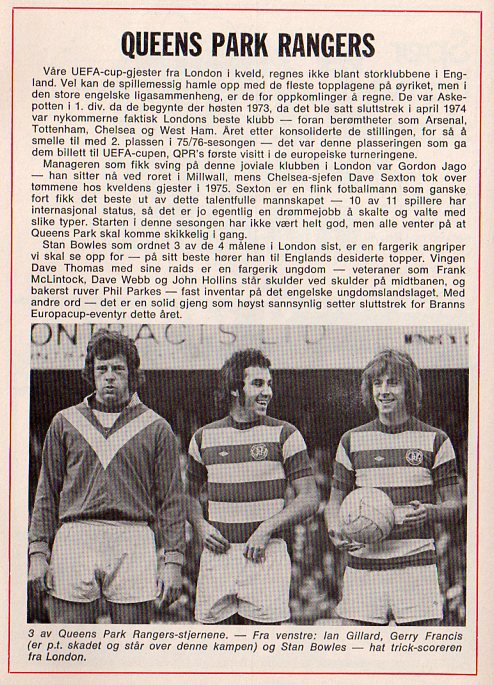 Robin had not expected English football to be so popular with the Norwegians and when the Rangers fans arrived at the ground for the 7pm kick-off they were besieged by Brann fans wanting to swap souvenirs. Robin promised his scarf to one of the local kids, but only after the game was over. Joe English was an old hand as he had seen Rangers play a number of friendlies abroad and he knew what to expect. He was well prepared with a stock of Rangers badges that he traded with the Brann fans.

The game itself was a very comfortable one – very easy and extremely one-sided, far more than the first leg in London had been. After just 2 minutes, Rangers opened the scoring with Dave Webb’s diving header past Brann keeper Jan Knudsen after a cross from Dave Thomas. Brann then came back at Rangers and Phil Parkes had to make two good saves. After 20 minutes Mick Leach received a knee injury after a tackle from the Brann No.8 Larsen and had to be helped off the pitch by Rangers physio Richard Roberts and Dave Thomas. Martyn Busby came on as substitute. However on 37 minutes, Rangers made it 2-0 on the night and 6-0 on aggregate with a goal scored from a tight angle by Don Givens.

In the 68th minute, Stan Bowles scored again after a cross from Don Masson. Two minutes later Don Givens made it 4-0 from a Dave Clement cross. In the final 10 minutes of the game, the stamina of the professional players told against the Norwegian part-timers and Rangers scored 3 more goals with Thomas on 81 minutes and then Stan Bowles with 2 final goals in the 86th and a header in the 88th minute to complete his hat-trick. 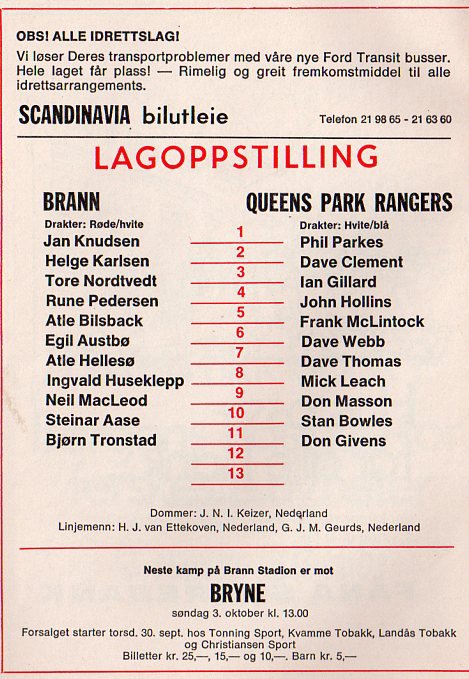 In ‘The Times’ the next day, under the headline: ‚ÄúBowles completes annihilation of amateurs‚Äù, it was reported that Rangers were ‚Äúsuperior‚Äù from the start of the second half and at times cut the Brann defence to ribbons.‚Äù

Harry Miller was the reporter for the ‘Daily Mirror’ in Bergen and under the headline: ‚ÄúBowles Blitz !‚Äù he wrote that Rangers now faced a midfield problem as the versatile Mick Leach was deputising for the ineligible Eddie Kelly in Bergen. Kelly, who been sent off for the reserves at Luton on the Tuesday, was now suspended for Rangers next game at Highbury the following Saturday versus Kelly’s old club Arsenal. With Leach injured Tommy Cunningham had to come into the side at Highbury for a relatively rare 1st team appearance in a game that saw Phil Nutt on the bench and Dave Webb play in goal after Phil Parkes went off injured – this was an era long before substitute goalkeepers of course. Webb had actually played one full 90 minute game for Chelsea in goal on Boxing Day 1971 v Ipswich Town. He kept a clean sheet in a 2-0 win for Chelsea. 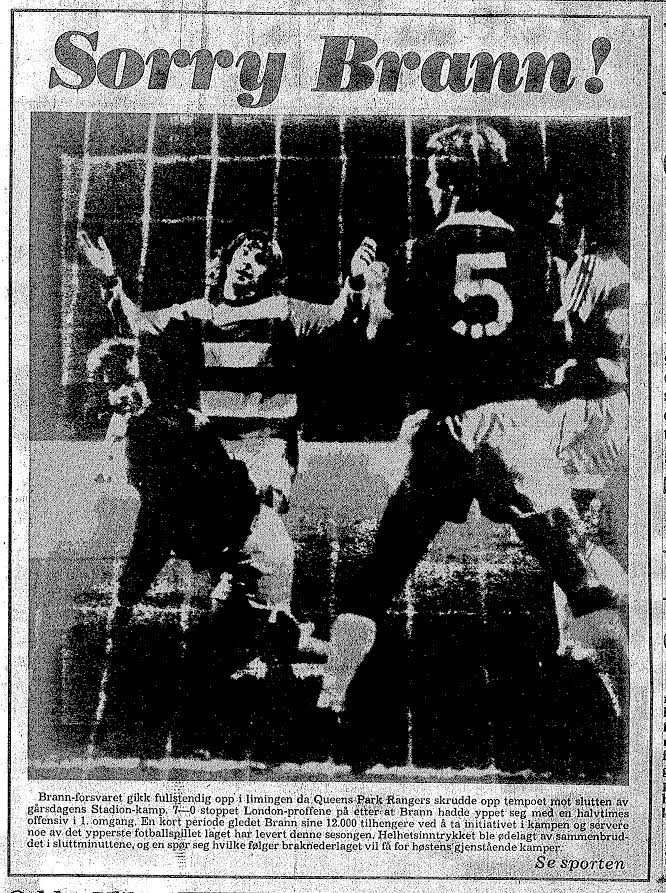 The local Bergen newspaper the next day had a photo of Stan Bowles on the front cover under the headline: ‚ÄúSorry Brann !‚Äù A great shot of Stan shrugging his shoulders and looking at the crowd after scoring one of his goals. As Bob Drisco reported in the ‘The Sun’, ‚ÄúBowles the Goals kept his audacious pre-match promise to score a hat-trick to match the one he got in the first leg‚Äù. In just 2 matches Bowles had scored 6 goals and was already well on course in an attempt to beat the then British record for one player of scoring 10 goals in Europe in one season.

So Rangers 11-0 win on aggregate got the club off to a great start, but the next round cup draw matched them with much tougher opposition in the 2nd Round – a trip behind the Iron Curtain to face the crack Czechoslovak team Slovan Bratislava, a team that consisted of the bulk of the national side who had beaten Holland in the semi-final and West Germany in the final of the European Championships that summer. Read all about that trip here: http://www.indyrs.co.uk/?p=923

I’d like to thank Joe English, Alan Barnes and especially Robin Haldane for sharing with me their recollections of the trip to Norway and Dag Hakon Hellevik of the Norwegian R’s, aka the Official QPR Supporters Club of Scandinavia, for his help with local research in Norway.

In the coming months we’ll also feature articles on the later 1976-77 UEFA Cup games at 1 FC Cologne and AEK Athens.