The title doesn’t refer to a warning given out to the other Premier League Clubs, but it actually comes from a WW1 propaganda postcard that I have in my collection. It looked interesting when I purchased it and realised of course, that it might not even have any connection with the Bush. Later on closer scrutiny, the postmark revealed that it was posted from Shepherds Bush in September 1915. Then, I came across an article on ‘The Bushmen – 1915’ in a very interesting booklet published by the Shepherds Bush Local History Society titled, ‘Around the Bush – The War Years’:

‘The West London Volunteers and the Bushmen’s Training Corps are making progress in numbers and efficiency. Sir William Bull, whose interest in local affairs is as keen as ever, has designed a badge for the Bushman – a hawthorn bush with a letter “B” and a shepherd resting on a crook. The Bushmen have their own marching song, composed by a local volunteer, Mr Alfred Whittell: 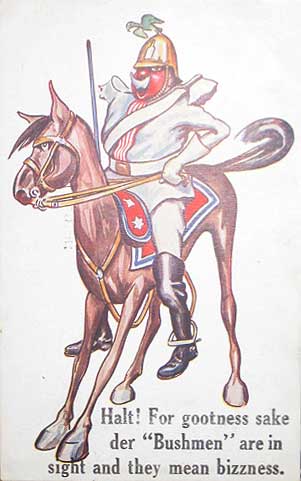 March, 1915 saw the formation of the Hammersmith and Fulham Volunteer Regiment; this was an amalgamation of the Bushmen and the West London Volunteer Corps, and it was named 20th (Hammersmith) Battalion County of London Regiment. Sir William Bull, MP, was the Honorary Colonel and Major T.G. Taylor was the Commanding Officer. There were four companies and two of these, the ‘A’ and the ‘B’ Company met at the Drill Hall in Wood Lane. There were platoon and company drills every week as well as trench digging and signalling exercises. There were also instructional classes for officers and NCO’s. The Ambulance section met at the Guardian’s Offices in Cathnor Road.

By August, many letters of complaint appeared in the local press. The Volunteers had lost interest and it was difficult to get the men to turn up at the various drills and parades. The men complained of the lack of weapons and ammunition. One correspondent wrote: “The Volunteer Movement has risen to a splendid height unaided, through the patriotism of its members. It would be a great pity if it weakened.”

I joined the band while still at school in 1916. Drum Major Richard Harvey was the Sgt Major in charge. We kids called him Uncle Dick, actually I think he was a cousin of my father. The sergeant was named Rowbotham. It was a fife and drum band and a good one and there was a coterie of bugles. Band practice used to be held weekly under one of the railway arches in Ravenscourt Park, where there was also a miniature shooting range. When dressed up, we wore the grey-green uniforms, not khaki. Khaki made its appearance after the Lord Derby scheme started and conscripts had to do six months evening and weekend training with the Volunteer Regiment (pre-war volunteer that is), as part of their preparation for overseas. When they first joined they used to wear a khaki armlet with G.R. in red over their civvies.

The Volunteer Regiment was in existence before the war. The authorities made use of it as a ready-made training ground. They also used us as night-time guards on stores and anti-aircraft gun sites, in the district. Weekends we would be away, out of London, trench digging or doing marker duty. Another Sunday it would be a route-march. Parade at 8 o’clock in the morning and off, all brass polished and Uncle Dick in front with his drum-major’s baton. I remember we did 17 miles one Sunday. It was all great stuff for a kid of my age – ‘all uniforms to be worn’. My pal Ted Dimmock and I – he was in the band too – were star material.

Other times there were recruiting marches around West London with halts and speeches. And I remember spending Sundays’ hanging about on Wormwood Scrubs and the environs, on what they called manoeuvres with officers in cars and on horses, dashing about, while we shivered in the cold, without the slightest idea of what was going on and caring even less. You will realise I was still a schoolboy. I was only fifteen and three quarters when the war ended. 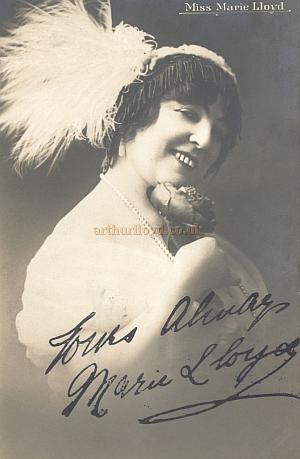 In 1917, the band attended a recruiting concert at the Shepherds Bush Empire. We had to crowd in at the back of the stalls in twos, with the smallest in front, and, at the signal, we started playing and marched down the centre onto the stage, where we formed a semi-circle and played out our piece. We had a regimental sergeant major (of the Guards) who instructed us in bayonet drill and he specialised in what he call ‘Sword Magic’. At the concert he did a turn in which he finished up slitting an apple on a girl’s throat. Marie Lloyd was on the bill, as well as a number of other well known artists.

In 1917 or ’18, we went to camp at Tadworth under canvass. There were supposed to be 10,000 of us. There were manoeuvres and marches and drills. I don’t know what the other blokes’ memories of it were – I had the time of my life. Imagine, a Bush kid – I had never seen the ‘real’ country before.’

11 thoughts on “Halt ! For Gootness Sake der ‘Bushmen‚’ Are in Sight & They Mean Bizzness”