It all started in 1954 when an England X1 beat a Young England side 2-1 at Highbury. The following year it was an Old England team that defeated their young opponents 5-0.

Then continuously from 1957 until 1969 on the eve of the FA Cup Final, an England team took on a Young England side at either Highbury or Stamford Bridge.

On Friday, 19th May 1967 Rodney Marsh played for Young England and for the senior side Peter Springett filled in for Gordon Banks.

At 10pm that night BBC-1 showed highlights of the match together with a preview of the FA Cup Final. I watched at home in grainy black and white, and can still see in my minds eye Rodney’s amazing second goal. I doubt, sadly, whether footage of the game still exists?

‘Rodney Marsh brought a refreshing flair and his own fan club to windswept Highbury last night. 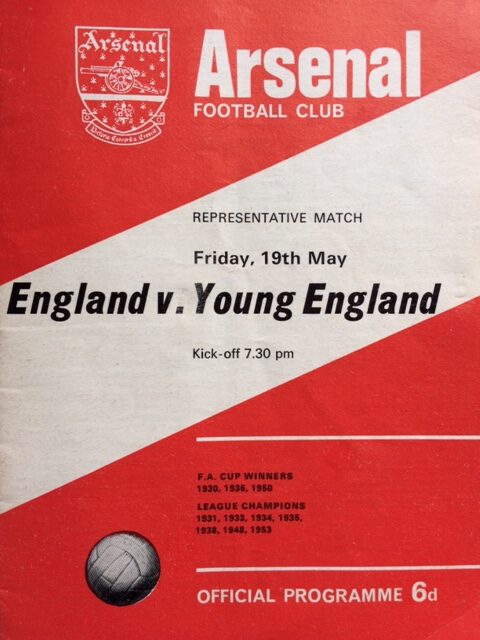 The big bunch of Queen’s Park Rangers supporters who chanted his name and cheered every time he moved menacingly forward, seemed to know what to expect. An England side that included six World Cup winners obviously didn’t.

The fair-haired forward who finished the season as the League’s leading scorer teased and tormented them. And he capped a brilliant display with the goals that began and completed England’s rout.

It was the first time in nine years that England have been beaten in this eve-of-the-Cup Final match. But this was more than defeat – it was humiliation! The elders of England allowed themselves to be out-run and out-thought.

And on a night when London belonged to London, Marsh’s goals were coupled with two from Fulham’s Allan Clarke – both penalties – and another from young Fulham winger Les Barrett.

Marsh sent England spinning towards defeat with a fine header from a John Sissons corner after thirteen minutes.

Talented Clarke, with an obvious eye on Mexico, 1970, coolly shot the first of his penalties after 37 minutes.

Brian Labone gave away both that one and the second scored by Clarke in the 62nd minute.

Barrett added to lethargic England’s troubles with a 75th minute goal made by a wonderfully Rodney Marsh through-pass. Then a minute from time, Marsh beat three defenders in a brilliant close dribble to crash in No.5.’

In that final representative match at Stamford Bridge on 25th April 1969, Peter Springett played in goal for Young England, which finished goalless.