I always admired Bernard as a player. He was the perfect centre-forward to partner Brian Bedford, a dynamic goalscorer, back in the early sixties.

Alan Barnes relates an incident in a match against Bury, in which QPR, 1-0 down to the league leaders, fought back to win 3-1 with a late hat-trick from Brian Bedford, (I was in the Loft Boys pen and witnessed Brian as he put Bury to the sword).

During the game, Bernard had an altercation with the Bury centre-half John McGrath (a big name signing from Newcastle as I remember), and proceeded to introduce a rather large piece of mud into Mr McGrath’s face. You did not mess around with Bernard.

Bernard went on to marry a local girl, and resided for a while in a house in Loftus Road.

Rest in Peace Bernard, and thanks for the memories. 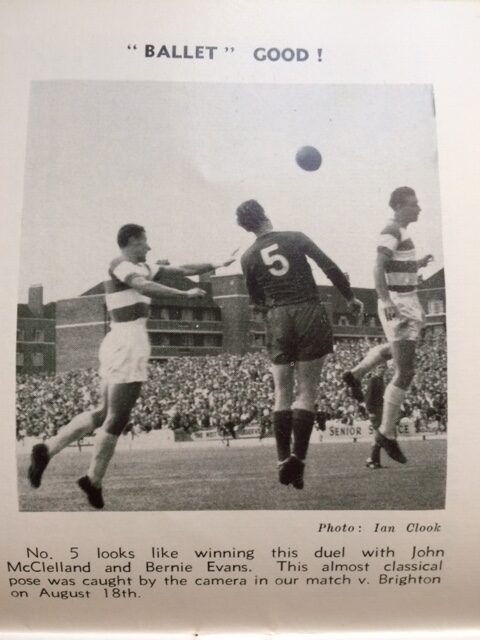 It was sad to hear the news of the passing of Bernard Evans, QPR centre-forward of the early 1960’s.

During his spell at Loftus Road from November 1960 to December 1962, Bernard proved his worth as a goalscorer with 39 goals from his 84 first team appearances.

He formed a dynamic strike partnership with ‘R’s Ace’ forward Brian Bedford in a Rangers team that so narrowly missed out on promotion to Division 2 in the 1960/61 and 1961/62 campaigns.

Although Bernard lacked a bit of pace he knew where the goal was! I don’t recall him missing many sitters. He certainly seemed to like playing against Torquay United.

On 22nd April 1961 at Plainmoor he scored a hat-trick in Rangers’ 6-1 victory and scored another three goals the following season on 30th December 1961 when the R’s beat Torquay 6-0 at Loftus Road.

Another part of my childhood removed by the relentless march of time.

Bernard was born in Chester on 4th January 1937.

As a 17-year-old, he scored on his debut for Wrexham, after just 27 seconds.

He was called up to do his National Service in March 1957 and served with the Royal Artillery.

Bernard returned to Wrexham after his two years service and won a Welsh Cup winners medal after the win over Cardiff City.

Alec Stock signed him in November 1960 for £2,000 and he made his debut in the home match against Shrewsbury on the 19th.

It was noted in the match programme that a waterlogged pitch the previous week had ruled out his home debut for the reserve team.

Two weeks later he scored two of the goals in the Club’s record 9-2 victory over Tranmere Rovers.

It was reported that after 16 days he was the subject of a telephone enquiry from an envious club, but the clear response from the management and directors was: “Promotion is the number one priority.”

Rangers beat Bury 3-1 on 28th January 1961 at Loftus Road, courtesy of a Brian Bedford hat-trick and Bernard was later described as “the silent hero”:

‘An abscess under a tooth puffed his face on one side to twice the normal size and there were pre-match discussions about whether or not to remove the tooth.’

‘It was decided that the wind and the rain might add to his discomfort if the tooth came out so he played on in agony.’

‘After the game the swelling was down and he said: “I enjoyed the match so much I almost forgot the pain.” Out came the tooth on Monday.’ It was also noted that Rangers were still unbeaten with him in the side.

After scoring 39 goals in 84 appearances, Bernard was transferred to Oxford United in December 1962 for £5,500.

In 1966 he set up an industrial cleaning business at Shell Oil in Ellesmere Port, which he continued to do for the next 30 years.

2 thoughts on “In Memory of Bernard Evans”