Rotherham moved a step closer to Championship relegation as QPR inflicted a 12th straight away defeat.

The Millers are now 24 points adrift of safety – the exact number left to play for – but a goal difference of -54 has all but sealed their fate.

Matt Smith lashed in after 5 minutes before Joe Newell’s 25-yard strike and Luke Freeman’s poked goal made it 2-1.

Yeni Ngbakoto scored a penalty, Massimo Luongo headed in and Nedum Onuoha added a late fifth to complete the victory.

At the start of the day Rotherham could have seen their drop to League One confirmed, but Blackburn’s 2-2 draw before kick-off ensured that they would hang on for another week, regardless of their result.

However, Paul Warne’s side had taken just one point on the road all season and were soon behind, with Smith firing in a volley after good work from Idrissa Sylla.

Newell’s stunning volley levelled the game, but hesitant Millers defending allowed Freeman through on goal less than a minute later and he beat Lewis Price to put QPR back in front.

The home side extended their lead straight after the break as Ngbakoto converted from the spot after Aymen Belaid’s foul on Smith and Luongo’s first goal for the club from Ngbakoto’s cross made their lead comfortable.

Conor Washington struck the post before Onuoha converted a free kick with a tap-in in injury time to round off Rotherham’s 29th league defeat of the season.

The comfortable win is Rangers’ fifth in seven games, while Rotherham, who have a goal difference 40 worse than fourth-from-bottom Burton, will see their three-season stay in the Championship finally come to an end if they fail to beat Fulham on 1st April.

QPR boss Ian Holloway: “I didn’t enjoy the first-half at all. We scored early and it looked like we thought we’d done enough.”

“We didn’t move the ball sharply or press, but luckily we managed to get another goal and then the second-half I was delighted with.”

“In the end we got what we deserved, but we’ve got to keep going. Let’s hope we can get a group of players who believe they can win on a regular basis. At the minute, our stats are telling me that’s what we’re doing.”

Rotherham boss Paul Warne: “My overriding emotion is of embarrassment. I’m clapping our fans at the end and most of them were pretty courteous to me. If they were throwing stuff at me I’d understand why.”

“I’m not saying they threw the towel in, because that’s not what they did, but you could tell they just wanted the game to end after 54 minutes.”

“In this league, some of our players are being outclassed. I can’t legislate for individual errors of that magnitude.” 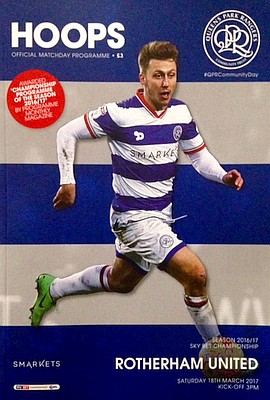 After just five minutes, Matt Smith was set up nicely with an over-the-top ball from Idrissa Sylla and he finished with aplomb.

We thought that it could be one of those days when eight or so minutes later, Joe Newell spectacularly thumped the ball in the net from 25-yards. Many R’s fans applauded the goal.

However, Rangers replied just minutes later when Luke Freeman pressurised their defender into losing possession and after a couple of touches he calmly slotted the ball in the net.

Just after the break, Yeni Ngbakoto scored from the spot after Matt Smith was fouled in the box.

Massimo Luongo made it four after 57 minutes, with his first ever goal for the R’s, with a flicked header from Ngbakoto’s cross that came off the ground and beyond the keeper.

The fifth goal came in added time from Ngbakoto’s free kick. Nedum Onuoha was on hand to meet the ball inside the six-yard box.

Saturday was designated a ‘QPR Community Day’, with the Club thanking various local public sector organisations and charities for their valuable contribution to the community.

Also five R’s fans had been voted ‘Unsung Community Heroes’ and these included nine-year-old George Sharp, who had raised £400 for ‘QPR in the Community Trust’ when he competed in last year’s Junior Great South Run.

Around 50 R’s fans (including George), walked the 13 miles from the training ground to Loftus Road to raise funds for the ‘QPR Tiger Cubs’.
Well done to them.