Taddy & Co. produced three sets of cards in their Prominent Footballer series. This latest one is the 11th QPR card that I have featured from the first series issued in 1907.

On the reverse side of this original card it reads: ‘A delightfully cool Pipe Tobacco, combining the sweetness & fragrance of the better class Virginia Tobaccos with the rich flavour of Latakia. Rather a full-flavoured but an eminently pleasant mixture.’ 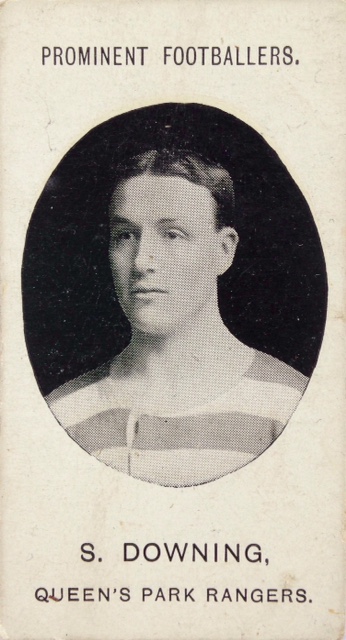 Samuel Downing was born in Willesden on 19th January 1883. He started his football career with Willesden Town and spent time at Willesden Green and Park Royal. His next club was West Hampstead and he was then transferred to Queen’s Park Rangers in April 1903.

Downing made his debut later that year at Swindon Town on 7th November. He went on to make 168 Southern League and FA Cup appearances and also played in both FA Charity Shield matches against Manchester United in 1908. Samuel notched up 13 goals during his time at the Rangers.

He moved on to Chelsea in April 1909 and in 1914 he was transferred to Croydon Common.

After retiring from professional football, Samuel became a cricket coach at a college in Maidenhead. He passed away in March 1974, aged 91, in Cuckfield, Sussex.