The following servicemen had at some time played for Queen’s Park Rangers and all tragically lost their lives serving their Country:

Corporal Albert ‘Ben’ Butler’ – Apart from playing for QPR, he was also the first professional footballer in the ranks of 17th Middlesex to be killed in action (I wrote more about him in my commemoration article of 2011).

Albert Bonass – He joined Rangers in 1939 and later became a reserve policemen before joining the RAF. Apparently he was a Ju-jitsu expert and between 1940 and 1945 he guested for Fulham, Aldershot, Brentford, Watford, Luton, Southampton and York. He lost his life in 1945 when his Stirling bomber crashed in Yorkshire during a training flight, eight weeks or so after VJ Day.

Alan Fowler – He guested a few times for the R’s in 1940/41 and also 1943/44, but was actually on Swindon Town’s books although they did not compete between 1940 and 1945. Sgt Fowler served in the Dorsetshire Regiment and lost his life in July 1944 after the D-Day landings. He is buried in the Banneville-la-Campagne War Cemetery.

Evelyn Henry Lintott – Apart from making 35 appearances for QPR, Lintott was also our first full England international. He was killed leading his men of the 15th West Yorkshire Regiment on the first day of the Battle of the Somme. He was the first professional footballer to receive a commission.

Frank Cannon – It now seems that Frank Cannon was born in Ware in Hertfordshire on 8th November 1888. He began his career with Hitchin Town whilst working for a firm of solicitors. Later he made 29 appearances for QPR before signing for West Ham. He was transferred from the Bedfordshire Regiment to the Essex Regiment, rising to the rank of Sgt Major. Aged 27, he was killed by shrapnel at Ypres on 15th February 1916, leaving behind his wife Violet and three children. He was buried at Potijze Burial Ground in Belgium.

Quarter Master Sgt J.P. Martin described the circumstances of his death in a letter: “He was just ready to leave the trench when several shrapnel shells burst over him, wounding him and several others. Although his wound was rather serious, he was wounded in the back. It was quite thought he would get back to England and recover, but I am sorry to say he died on his way to the dressing station about an hour after he was hit”.

Joseph Dines – Apart from winning more than 30 amateur caps for England, he also played in all three matches in the 1912 Olympics in Stockholm for the Great Britain team which won him a gold medal. He made his one appearance for QPR on 16th April 1910 against West Ham. Joseph Dines was one of three brothers to enlist and served as a Second-Lieutenant in the King’s Liverpool Regiment, but he only survived for eleven days. He was cut down by machine gun fire on 27th September 1918 in Pas-de-Calais on the Western Front and buried in the Grand Ravine British Cemetery, Havrincourt.

Albert Edwards – He made 17 1st team appearances for QPR and also played for Bristol City and Newport County, but lost his life in the Great War.

Oscar Horace Stanley Linkson – Andrew Riddoch’s book: ‘When the Whistle Blows’ mentions the time that this former Manchester United right-back was actually arrested on one occasion after he absented himself with Pte Wilfred Nixon of Fulham to play for the Rangers at White Hart Lane. Pte Linkson lost his life on 8th August 1916 and is commemorated at the Thiepval Memorial. His mother never accepted that her son was dead, choosing to believe that he had run away to escape what she believed to be an unhappy marriage. He left behind a widow and two young children at the family home in Barnet.

Harry Vernon Thornton – 37 Rangers appearances and scored 10 goals. Like
many other players, he joined the ‘Footballer’s Battalion’ and later died
in France

John H. Pennifer – He arrived at QPR in 1913 and after just 3 appearances, he enlisted the following year. Pennifer played a number of times for the 17th Middlesex. Andrew Riddoch records that:

‘Three days later, a 17th Middlesex team played Hampstead Town at the Avenue Ground in Cricklewood Lane, winning 3-1. Pte Henry Pennifer of QPR scored two of the battalion’s goals…’ He died at the Battle of the Somme. 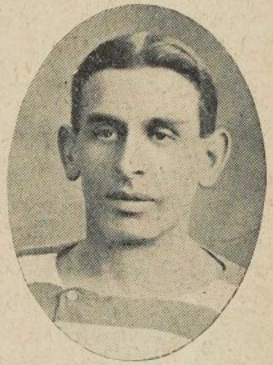 Corporal John Tosswill – Made just 3 appearances for QPR before joining the Royal Engineers. He became a dispatch rider and returned home after being wounded, but passed away aged 24 on the operating table in Eastbourne Military Hospital on 28th September 1915.

The following obituary appeared in the Liverpool Echo on 2nd October 1915, and is reproduced with permission (as is the above pic) from the football historian Kjell Hanssen.:

‘A likable fellow, somewhat eccentric, deaf, and a good-class footballer. That is how one might sum up Corporal J.S. Tosswill, whose death is announced this morning. His ear deficiency used to cause some curious happenings in football matches, for he was not able to hear the referee’s signal, and oftimes was seen to proceed to score goals what time the crowd and other players were waiting to take a free kick!’

‘Poor Tosswill (writes “Bee”) was a bit of a wag, and his letters to me were always novel and interesting. He was with Liverpool but for a short time, afterwards proceeding to Coventry City. He was brought from Queen’s Park Rangers, and learnt his game with Tunbridge Wells Rangers. On the outbreak of war he joined the R.E. section, and was soon made a corporal. A capital cricketer, he played for a time with Stanley. His death took place this morning as a result of an operation at Eastbourne’.

Rangers stalwart Jimmy Eggleton was gassed in World War 1 and he continued to suffer with chest problems throughout his life.

Dennis Higgins was an amateur defender who played thirty times for the club before joining the Sportsmen Battalion and becoming an officer. He was so badly injured at Ypres in Flanders that he never played again.

Apart from the servicemen associated with playing for QPR and losing their lives, there must have been numerous fans too. Sadly, at least two have been killed in the current conflict in Afghanistan:

Acting Corporal David Barnsdale – 33 Engineer Regiment (Explosive Ordnance Disposal). He was killed clearing explosive devices and was also the same age as Tom. His parents laid a wreath on the Loftus Road centre circle before the Burnley home game in 2010. 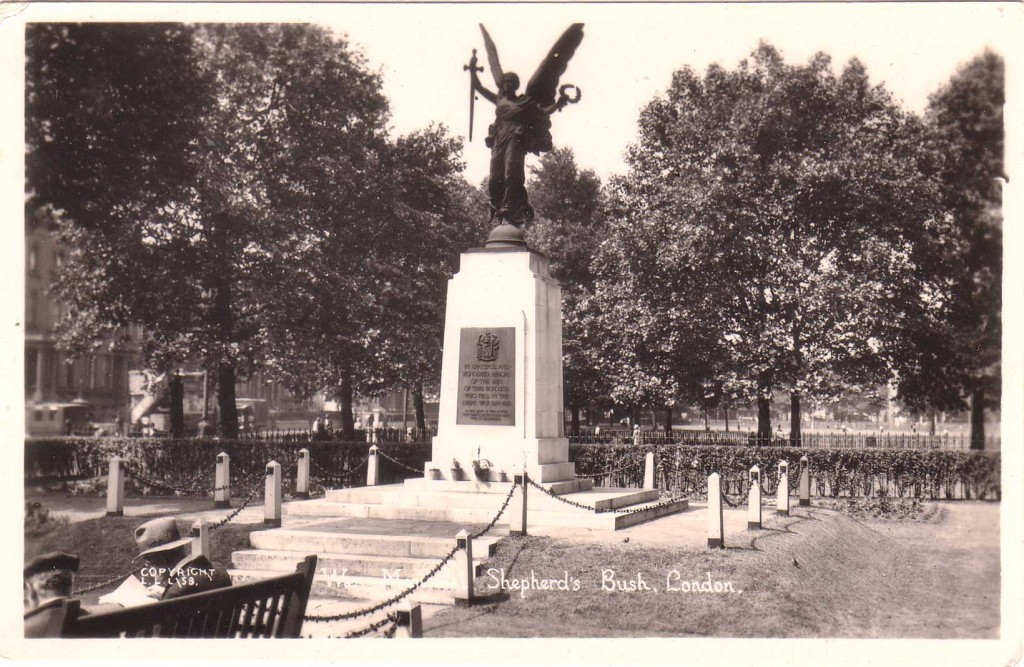 (The above postcard is from my collection)

The War Memorial on the eastern corner of the Bush Green was restored earlier in the year with a stepped, granite plinth. The inscription reads: “In grateful and honoured memory of the men of this borough who fell in the Great War 1914-1918 also of those who gave their lives in the Second World War 1939-1945”.

(My thanks once again to Andrew Riddoch for giving me permission to reproduce sections of his highly recommended book: ‘When the Whistle Blows’ – Also, my thanks to football historian Kjell Hanssen and our Club Historian of course, Gordon Macey, for all the players career details).

One thought on “We Will Remember Them”