There were no home friendlies this summer of course, but there was an interesting fixture in 1988 when top Egyptian side Al-Ahly visited Loftus Road. I had the match programme, but no record of the Rangers line-up, so I asked Gordon Macey to help me out with the team details:

A report later appeared in the ‘Bush Ranger’:
‘The Egyptians invaded Shepherds Bush six days before the start of the League season. Al-Ahly, who have dominated Egyptian and African football for more than a decade, paid a special visit to Rangers Stadium to help inaugurate the new grass pitch.

It was a match which attracted a crowd of 3,471 – more than half of whom were Egyptians either living in, or visiting London. The game was also screened live by Egyptian television to around 54 million people in various African countries. In fact, the television company made a special request before the game for Trevor Francis to don the No.11 shirt – because the Egyptian fans associate him with that number.

Rangers took a 16th minute lead through Alan McDonald’s far-post header from Kevin Brock’s cross. Two more goals looked likely, but both Dean Coney and Martin Allen fired headers straight at the Al-Ahly keeper when they should have done better. The Egyptians also had goalscoring opportunities. Nicky Johns, deputising for the injured Dave Seaman in goal, had to be at his most alert shortly after half-time to make two fine saves. 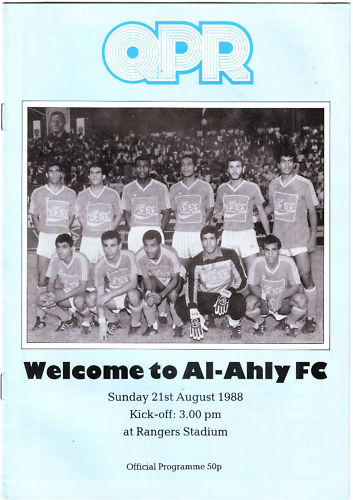 But not long after, Francis had struck the crossbar with a rasping shot. Johns had little chance when Al-Ahly produced a shock equaliser four minutes from the end. The wiry Rabie Yasin, arguably Al-Ahly’s best player – Taha Abouseid, the African ‘Maradona’, failed to live up to that star billing – climbed above the Rangers defence to head in from six yards.

“Eight of the Al-Ahly side play for the Egyptian national team, so I knew they were going to be no pushovers,” said Jim Smith. “I was particularly impressed by their goalscorer, Yasin. He found a lot of space and used it well. It was a good competitive game. It’s difficult for players when they face an opposition whom they’ve never seen before.”

The most pleasing thing on a blustery Sunday afternoon was the performance of Rangers’ new Cellsystem grass surface. It looked superb, played immaculately and none of the players walked off with grazes or injuries, as sometimes happened on the plastic surface.’

I wonder if any of the television footage is still in existence somewhere. I came across one connection between the two clubs, our former player, Allan Harris, who was also Terry Venables’s assistant at Loftus Road in the early 80’s, was to lead Al-Ahly to the African Cup as Champions from 1993 to 1995.

Rangers were to kick off the league season the following Saturday with a trip to Manchester United. Terrace tickets were priced at ¬£3.50 and there were also a limited number of seat tickets at ¬£6.60. There was a Special Train running from Euston to Warwick Road. The fare was ¬£13.00.

Lastly, thanks to Gordon Macey for his help with the team details.