The R’s were expected to win the home fixture against mid-table Watford on 10th February 1962 and keep themselves up and running with the rest of the promotion pack.

Sadly, however, as ‘Sods Law’ would have it the unexpected happened and Rangers were defeated 1-2. There were to be more tales of the unexpected (or should that be tails) when the final whistle blew, but I leave that detail for later on in this article.

Rangers started the game in slightly lacklustre fashion and surprisingly went two goals down. Stung by this turn of events there was an increase sense of urgency by our hooped heroes in a desperate attempt to try and rescue the situation.

During most of the second-half, the R’s produced a continuous flow of pressure and Watford were put on the back-foot. Our hopes were raised, falsely as it turned out!

Much to the Chagrin of the Loftus Road end, including the Boys Pen, Dave Underwood, the Watford keeper (ex-QPR) was having quite an inspired spell between the posts, especially so as the game moved towards its climax.

This resulted in frustrated Rangers supporters behind the Loftus Road goal, giving much “stick” and abuse to the Watford custodian. 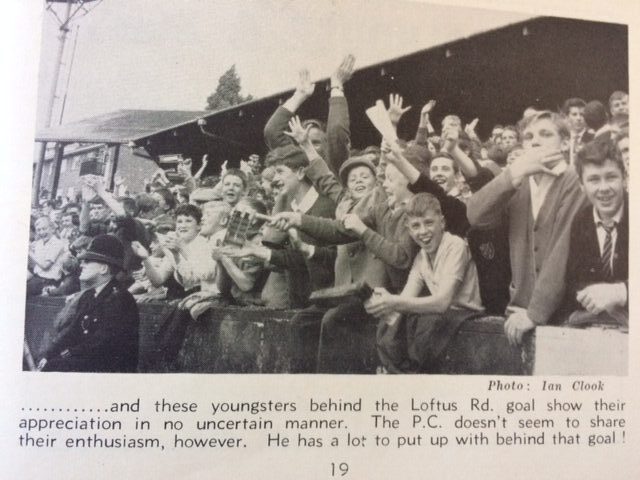 The R’s finally pulled a goal back with John McClelland scoring near the end, but still Dave Underwood and his Watford co-defenders would not be denied victory.

More QPR attacks…more near misses…and even more hostile crowd reaction in the finale failed to change the score-line and the 1-2 defeat was not to be avoided.

Then, at the sound of the ref’s whistle the REALLY unexpected happened. Dave Underwood dropped his shorts and bared his backside to all and sundry behind the goal as if to say: Bum to you lot! We won!”

Unexpected certainly but considering the adverse verbal treatment he received throughout for most of the second-half, perhaps it was understandable. Never the less, it was all quite a shock to us juveniles in the Boys Pen I can tell you!

4 thoughts on “The Home Fixture in 1962 against Watford: ‘At the Final Whistle Dave Underwood Dropped his Shorts & Bared his Backside!’”

Leave a Reply to Colin Woodley aka ESSEXURS Cancel reply