The match against Blackburn Rovers in 1967 was originally scheduled for the 4th November but was postponed. It was then re-arranged for Tuesday, 12th December and the following match report later appeared in the local Gazette:

‘Rangers jumped right back into contention for promotion with a comfortable victory over middle-of-the-table Rovers at Loftus Road, on Tuesday night.

With Rodney Marsh’s scintillating form inspiring the Rangers attack to great things, they thrilled their supporters with a display reminiscent of last season’s glory days.

Marsh was at times superb. He scored the first goal, brilliantly made the second and was a constant thorn in Blackburn’s side.

With captain Mike Keen marshalling a strong defence, Rangers were rarely in trouble. Ex-England wingers Brian Douglas and John Connelly could do nothing for Rovers, and Douglas was in fact little more than a shadow of his former self.

Wing-half Barry Hole and inside-man Eammon Rogers were the only visiting players who looked likely to break Rangers’ hold on the game.

An exciting match marred only in the last quarter of an hour with unnecessary fouling, and five players found their names in referee Walker’s book.

An incident involving Marsh and Rovers’ substitute Anderson- who replaced the injured Billy Wilson after the 52nd minute – started the ruck. They had their names taken and Rangers’ full-backs Harris and Clement, and Rovers’ Sharples followed them into the book before the end. 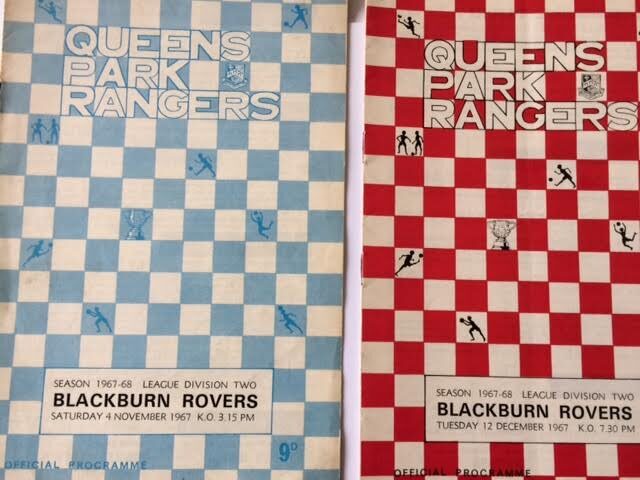 The play was reasonably even until Rangers took the lead in the 32nd minute with an excellent goal by Marsh. He received the ball from Sanderson, headed it over a defender’s head, rounded him and shot home.

Ten minutes later, Rangers went further ahead. This time Marsh broke from 40 yards then checked his pace, eluding three defenders in the process, slipped the ball to Wilks who shot in off the post.

Minutes after half-time, a Tony Hazell free kick was headed down by Roger Morgan and Sanderson scored.

The final goal of the game came in the last minute. Connelly scrambled the ball home for Rovers, following a free kick by Barry Hole.’

I didn’t see it, but there were rumours of a punch-up in the tunnel after the final whistle?

The programme reminded members that they could pop into ‘The Blue & White Club’ after the match for a drink.

Four days later the R’s went on to beat Portsmouth 2-0 at Loftus Road.