Ken Bromfield alerted me recently to a match against Southend United in 1955. The game at Loftus Road against the Shrimpers on 8th October was certainly a feisty affair and full of incident!

“I remember a match against Southend in 1955, when my brother, standing in the boys pen at the Loftus Road end, was smashed in the face from a ball kicked by a Southend player! It caused a riot and it was a very violent game. We lost 1-2.”

‘Tempers became frayed, football was forgotten, players were warned, spectators escorted from the pitch. That was the scene at Loftus Road on Saturday, against Southend.

Players on both sides deserved to be sent off, but got away with warnings – consequently, fouls continued throughout the whole of the second-half.

In just one-minute, Southend were a goal ahead. A sharp attack on the right-wing by the Rangers was quickly broken up and Baron, seizing upon the clearance, put through a neat pass which McCrory headed past Brown, who hesitated when a quick decision was required.

Rangers fought back strongly, but none of the forwards was willing to take a shot at goal, and the United defence had plenty of time to clear. 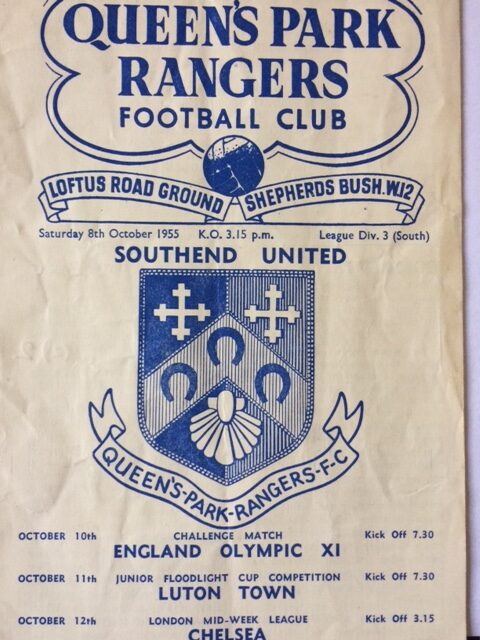 The Southend forwards were quick on the ball and made full use of the open spaces, and with the home defence extremely weak under pressure, they were always dangerous.

Rangers’ forwards were not together, and all their efforts were easily repelled. At this stage they never looked like scoring.

The old fault was standing out a mile: the inside men were much too deep and never able to press home any advantage, and they were slow in moving to the open spaces.

Rangers played well in midfield, but lack of cohesion in the front-line wasted a number of openings but generally the finishing was woefully weak.

Howe, United’s centre-half, kept Clark well under control, but with some support the latter might have been able to make better use of the ball.

Southend were well worth their two-goal lead at half-time for they took full advantage of the weakness in the home defence.

The beginning of the second-half found the visitors’ defence a little shaky, but they soon recovered and refused to give way. Southend certainly looked certain of the points at this stage, for the Rangers had little fight in them.

Baron went off for a short time after receiving an injury, and from then on it was every man for himself. Feeling crept into the game, and every few minutes the trainers were called on the field.

The game quietened down, and Rangers reduced the lead. Angell giving Shepherd a nice through pass.

Again feeling crept back, and the Southend goalie was in trouble with the spectators after an incident with Clark in the penalty area.

Cameron up-ended a player. Petchey was spoken to by the referee. Both sides had players limping about all over the place, and the game turned out to be the scrappiest affair ever seen at the Bush!

It was a pity that things had turned out like this, for the first-half had produced some good football.’

Elsewhere the Weekly Dispatch (London), reported that, ‘The game had deteriorated into a free-for-all. An incident between Southend’s goalkeeper Harry Threadgold and Rangers’ winger Ernie Shepherd brought a number of spectators on to the field and the police had to be called to bring order.’

The following Saturday the R’s lost 0-2 at Exeter City.