On the 19th February 1966, two of the top three Third Division sides met at Loftus Road. The R’s, sitting in third position, met Hull City, one place above them.

The following comprehensive match report was written by Brian Taylor for the Hull Sports Mail:

The Londoners began each half at a terrific pace in attempts to snatch early, demoralising goals and the Tigers’ defence had to pull out all the stops to hold them in check in these spells.

But each time City fought their way back into the game with their better method and tactics, which gave them more scoring chances, even though Rangers had more of the game. In fact, City had had four clear-cut openings by the time Rangers went ahead in the 33rd minute.

Springett had made great saves from Wagstaff and Houghton, and Henderson and Wagstaff had both missed good chances. It was just after Henderson’s miss that Rangers swept away to score through Collins, with a header that finished off a breakaway run by Keen.

Three minutes before the interval the Tigers equalised through Ken Wagstaff, although there seemed to be a bit of luck about the exchange of passes between the two inside-forwards – a move which enabled Wagstaff to dart in and hammer home a left-footer.

City once again withstood Rangers’ opening barrage at the start of the second-half and were showing signs of getting back into the game when Collins again set them back in the 67th minute. He came flying in to head home a centre by Lazarus.

The Tigers equalised once more when Chilton forced the ball home in the 73rd minute, after having his first attempt blocked on the line. But, four minutes later, Collins completed his first ever hat trick with another header, this time from what had been intended as a long-range shot by Watson.

Five minutes from the end another fine move by the Tigers gave Houghton a goal after a right-wing cross had been turned back into the middle for him by Wagstaff.

There was a sprinkling of about 300 City supporters at the Loftus Road ground, which after last night’s rain was bathed in spring-like sunshine. The pitch, however, was grassless, apart from the corners and in several places, there were still small puddles standing on the surface.

Rangers were unchanged after drawing with Watford in midweek, but the Tigers brought back Dennis Butler and Chris Simpkin, with Ken Houghton switching to his usual place at inside-left.

Setting a hot pace, Rangers won two corners in the first couple of minutes. There was a hold-up when Lazarus was hurt and then City tried to get Chilton away down the left-wing, but the ball was pushed into touch.

Keen headed just over the bar from a long throw-in and it was nine minutes before Springett touched the ball. Even then it was only from a back-pass by Langley after Sibley had checked a run by Wagstaff.

Immediately afterwards, though, the Tigers should have gone ahead. Ian Butler raced in from the left-wing and pulled the ball back to where Houghton, and Wagstaff were closing in.

Henderson sent Wagstaff and Chilton racing away down the right-wing in the 17th minute, and the inside-right ended a 30yd run by slicing his way into the penalty area and sending Springett sprawling full-length to make a fine save, one-handed.

There was no slacking in the early pace and the attacks were still being made swiftly and crisply, but Rangers were having slightly the better of matters, with occasional spells in which City moved well.

Rangers took the lead through Collins in the 33rd minute, Keen made the running and swung over an accurate centre which the inside-right headed out of Swan’s reach. 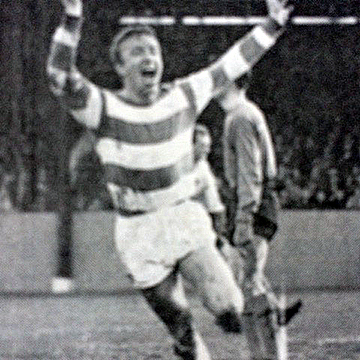 The Tigers were not long in trying to wipe out this goal and they would have done, but for a fine save by Springett.

Rangers, however, seemed to be playing with more confidence after their goal, but then, in the 42nd minute, the Tigers got on level terms with a rather fortunate goal by Wagstaff.

Houghton and the defender who was closely marking him, between them, got the ball back again to Wagstaff, who darted in and hammered a left-foot shot wide of Springett.
Half-time: 1-1.

When Rangers came out for the second-half, Hazell, Rangers’ substitute, was in their attack in place of Allen, who had pulled a muscle. The newcomer was prominent in early moves by Rangers, who however, did not carry the same punch in front of goal as the Tigers.

The Tigers were caught with both wing-halves upfield after a misunderstanding between Jarvis and Simpkin, and Rangers struck quickly, even though Chilton raced back to try and plug the gap. The ball was eventually forced out to Mark Lazarus and Dennis Butler moved in quickly to block the ball, turning it away for a corner.

In the 67th minute, Rangers got just the boost that they needed from Collins’ spectacular flying header.

This fired the Tigers into all-out action and there were appeals for a penalty when Wagstaff looked to have been tripped in the penalty area after a fine move.

In the 73rd minute the Tigers equalised a second time when Chilton scored from a corner by Ian Butler. His first attempt was blocked on the line, but he regained the ball and crashed it home.

Houghton was almost through the middle on two occasions, but then in the 77th minute, Collins completed his hat-trick to put Rangers ahead yet again. Once more, it was a header from what was a wild attempt at a long-range shot by full-back Ian Watson.

Just before this the referee had taken the names of both Dennis Butler and Andy Davidson, although from the press box it was not clear what for?

In the 85th minute, a powerful move down the right-wing ended with Wagstaff turning the centre-back for Houghton to head the third goal for City.’

QPR’s next match was two weeks later. The R’s beat Watford 2-1 at Vicarage Road with goals from Mike Keen and Roger Morgan.