On 21st February 1987, Rangers were knocked out of the FA Cup at Elland Road, but even worse for R’s fans were the rumours beginning to filter through that there was a proposed merger with Fulham!

Jim Gregory, QPR chairman for the past 22 years, revealed yesterday that he has sold his club for £6 million.

The buyers are Marler Estates, owners of Fulham plus the Craven Cottage and Stamford Bridge grounds.

Gregory would prefer the title of ‘London Rangers’, although the final decision rests with Fulham and Marler chairman David Bulstrode.

But a Football League spokesman said that if the name of the club using Loftus Road was changed, they would need special permission to play on the plastic surface.

In two years-time, Chelsea will be invited to ground share with the newly merged club, making Loftus Road the centre of soccer in West London.

Part of the £6 million deal Gregory has struck with Marler, is that next season’s merged club will wear QPR ‘s blue and white hoops.

He told me: “I’m not selling out. I was 59 three weeks ago, and I shall retire at the end of the season. I’ve got two companies worth £10 million. I don’t need the money. But I’ve had enough.” 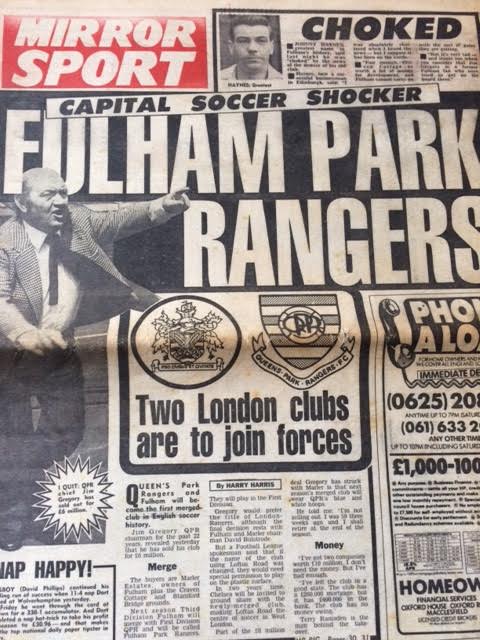 Terry Ramsden is the man behind the takeover. Ramsden, one of horse-racing’s most flamboyant characters, is now the king of soccer clubs.

He has built up a 29.9 per cent stake in Marler, who ownsFulham FC and their Craven Cottage ground and the Stamford Bridge ground, although this does not include the Chelsea club.

Fulham chairman David Bulstrode who, along with Marler’sRobert Noonan, masterminded the purchase of Stamford Bridge and Craven Cottage, has successfully negotiated with chairman Jim Gregory to buy QPR.

Bulstrode was seeking urgent talks with League president Philip Carter yesterday to clarify the amazing plans for West London football – involving the merger of Fulham and QPR initially, and then probably ground-sharing with Chelsea.

Gregory will step down as chairman of Rangers at the end of the season after reigning supreme at the Bush for 22 years – the League’s longest chairman. Now the way is clear for a new supremo, Ramsden, to move into West London.

As a Spurs supporter, Ramsden would clearly love to buy Tottenham, but they are not for sale.

Ramsden, featured on Saturday’s lunchtime soccer shows, admitted that he sees soccer clubs and their grounds as a business venture as well as a pleasurable pastime.

The 35-year-old with long flowing black hair is the entrepreneur with a love of football. Ramsden, and his company Glen International, has been a long-time Marlerbuyer.

He raised his stake to 29.9% a fortnight ago for a reported £7 million when the original investors decided, after nine years, to take profits. Marler’s management remains unchanged with Bulstrode staying as chairman.

Chelsea have just two more seasons at the Bridge before their lease expires and they will be homeless…unless chairman Ken Bates raises £25 million to buy the ground. Bates has an option to buy, but Marler claim it is a “questionable” option, much to the Chelsea chairman’s annoyance.

Clearly, Marler are planning to move Chelsea to Loftus Road to enable their re-development at the Bridge to go ahead. Fulham will eventually be developed, too.’