During the Big Freeze of 1963 the R’s travelled to Swindon on 12th January. Also setting off that day was Colin Woodley who has written the following account:

To say we were in the bleak mid-winter does not adequately cover the Winter of 1963, which totally disrupted the football season.

This extract from a weather report summed it up: “A belt of rain over northern Scotland on 24th December turned to snow as it moved south, giving Glasgow its first white Christmas since 1938.

The snow-belt reached southern England on Boxing Day and parked over the country, bringing a snowfall of up to 30cm. A blizzard followed on 29th and 30th December across Wales and south-west England, causing snowdrifts up to 6m deep.

Roads and railways were blocked, telephone lines brought down, and some villages were left cut off for several days. The snow was so deep farmers couldn’t get to their livestock, and many animals starved to death. Wiltshire had just had the worst blizzards for 80 years.”

These were the conditions I, at the tender age of 16, and friends, set off by train to Swindon hoping this was going to be a match that was played.

It is to the credit of British Rail that we actually travelled, and it was fortunate we were able to return! These were the times of no mobile phones to advise you of postponements and you were dependent upon British Rail advising you at any stops on the way with platform announcements.

The coaches were not exactly effectively heated in those days and it was a constant vista of snow out of the train window. It was a wonder we didn’t get snow blindness on the way!

Filled with copious amounts of dodgy hamburgers and Bovril we entered the ground in freezing temperatures.

I have vague recollections of the game. We were seated high in the main stand looking over the opposite stand to snow covered areas.

Rangers played like Bambi on ice on a pitch that would have failed a pitch inspection by a large margin today. But you had to wonder how the match ever got started, and, as it was the coldest I have ever been at a football match we wished it hadn’t! Only eight football matches were played that day!’ 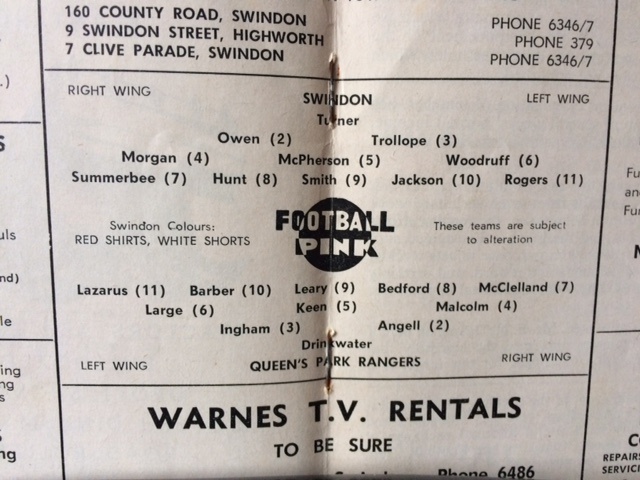 Showing complete disregard for his safety the fearless keeper continually threw himself at the feet of opposing forwards and get up with the ball.

For the past three months Drinkwater has looked far from safe but if this game is anything to go by his shaky spell is past.

Wearing his complete tracksuit he ignored the dangers of the icy pitch and made a number of wonderful saves which saved Rangers from a complete rout. His anticipation was excellent, and he could not really be blamed for any of the five goals that went past him.

There can be little doubt that Swindon’s footwear was the deciding factor in this farcical match.

Knowing what to expect, they all wore the basketball-type boots with sponge rubber soles which gave them a reasonable amount of control on the slippery surface, whereas the unsuspecting Rangers had great difficulty in keeping their footing in their studded football boots. 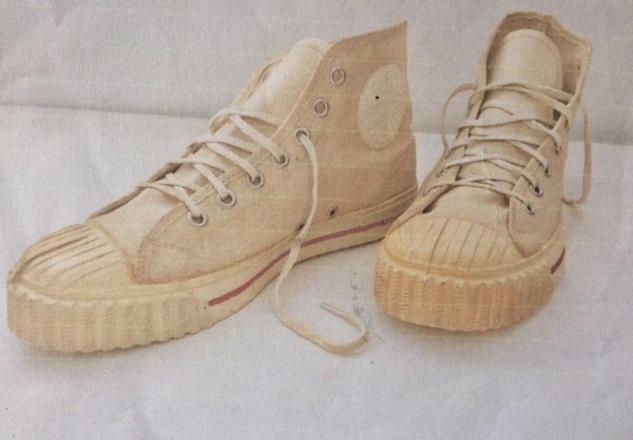 With the ball travelling twice as fast as usual and the players only being able to move at half-pace, actual football was impossible. Stock’s men made the mistake of trying to play their usual quick-passing game, whereas Swindon relied on long through balls which left the defence beaten by their inability to turn quickly.

Swindon’s direct attacking methods were employed from the start and in the first minute centre-forward Smith, who eventually netted a hat-trick, only just failed to catch a long through pass which went behind for a goal-kick.

Playing his first game at centre-half, Mike Keen looked a good stop-gap and it was his quick intervention which prevented right-winger Summerbee from running on to a long cross-field pass.

As Rangers struggled to find their feet on the treacherous surface, Swindon piled on all the early pressure and it was only good positioning by Drinkwater which stopped inside-left Jackson from opening the account following a corner.

Right-half Andy Malcolm, who appeared to master the conditions better than many of his colleagues, was the architect of Rangers’ first real raid. The home defence was caught napping, but Mike Barber could not get enough power behind his shot and goalkeeper Turner had no difficulty in saving.

At this stage it seemed that the first goal would probably decide the match. A goal would have certainly put more heart into the far from enthusiastic Rangers, while one felt that if confident Swindon went ahead they would have no difficulty in building up a big score.

However, to open their account Swindon had to beat Drinkwater and that was no easy matter. Summerbee seemed to have the easiest of chances when a long ball put him right through, but courageous Ray dived full length at his feet and smothered the shot.

Although Leary, Bedford and Malcolm were all working hard in midfield it was rarely that the Rangers’ forwards got near to the Swindon penalty area.

After more near misses and fine saves by Drinkwater, centre-forward Smith was given the simplest of chances, but his first attempt was blocked by Drinkwater and he was far too slow to shoot when the ball bounced straight back to him.

This let-off put some hope into Stock’s men and a few minutes later they came within inches of taking the lead. McClelland made his first clean break down the right-wing and his centre beat the entire defence.

Barber running in on the left fired in a hard drive which Turner was lucky to block. McClelland attempted to flick the ball over the line but again it was pushed out.

Lazarus was the next to have a go, but his shot was also kicked off the line. Thus passed Rangers’ one and only opportunity of taking the initiative in this match.

Soon after Lazarus did make a good break down the left, following a fine pass from Bedford, but Turner pushed his shot round for a corner and the danger was quickly cleared.

Within a few minutes, Drinkwater’s goal was again under pressure with Jackson racing through unchallenged. The inside-left ruined the chance himself, however, by wandering too far out to the right and his centre was blasted high over the bar by his inside-right, Hunt.

But the next attack ended any hopes of Rangers holding out. Summerbee took the ball almost into the goal post and with Ingham and Keen ready to tackle him, cleverly flicked it inside for Smith to push it past unsighted Drinkwater.

This goal came in the 39th minute and Smith might have had another before half-time, but his header from Rogers’ centre was diverted round the post by Drinkwater.

Early in the second-half it was only another daring dive by the Lion Heart which stopped Hunt from making it 2-0. Then with Ray beaten, Peter Angell came to the rescue, heading Smith’s shot from off the line.

One good movement between Lazarus, Bedford, Malcolm and McClelland gave a moment’s hope of a QPR revival but it was not to be and the bombardment by the Swindon forwards was soon resumed.

Despite heroic efforts by Drinkwater, Angell, Keen and Ingham, the second goal had to come, and it did, in the 62nd minute. Centre-half McPherson cracked a long-range free kick high into the penalty area and with the defenders unable to move quickly on the ice, left-winger Rogers ran in to nod home an easy goal.

A minute later Swindon had the ball in the net again, Hunt heading in from Smith’s lob, but the inside-right was offside.

Now Rangers had given up all hope and the forwards were content to drop back and relieve the defence of some of the burden, but they could not prevent left-half Woodruff heading in goal No.3 from Rogers’ corner.

In the 87th minute Smith made it 4-0, being left with only Drinkwater to beat after Keen had slipped on the ice attempting to cut off the centre.

For a brief half-minute Rangers broke away upfield. They gained a corner and Leary went close to scoring his first goal for the club with a neat header from Barber’s well flighted kick.

But this was only a slight pause in Swindon’s success as in the last-minute Smith completed his hat-trick, snapping up a simple chance after Drinkwater had blocked a shot from Rogers.

Swindon’s young side – their average age is only 21 – had recorded ten wins and one draw in their previous eleven home games, and even under normal conditions Rangers would have been hard pushed to take a point off them on their own ground. But at least they would have had a chance. Under these conditions they had none.

It would be most unfair to criticise any player in a game like this and it was impossible to judge whether Alec Stock’s experimental line-up could be a permanent success.

As far as one could tell, Angell looked a capable right-back and Keen a reasonable “emergency” centre-half, but it was so impossible for the forwards to operate on the ice; whether Mike Barber is the answer to the inside-left problem remains a mystery.’

Rangers’ manager Alec Stock was involved in an argument with the referee, Mr N. Hough, on the pitch pre-match, and the Club planned to protest to the Football League about his decision to allow the game to go on.