Geoffrey Leach of Hemel Hempstead wrote the following letter to the Club in 1969, which appeared in the ‘Ranger to Ranger’ section of the programme:

“Could you possibly search through QPR’ history books and try to get an answer to this. I reckon this is one of the most fascinating mysteries in football.

On November 16th 1903 at Kensal Rise, Rangers played twelve men against West Ham’s eleven and were punished for doing so, that I know for certain, but why they did it still remains a mystery to me. They did play twelve men because the match had to be replayed.”

The Club were unable to offer an answer, only to confirm that it was a Western League fixture, the date, opponents and that the match was later declared void.

So, I asked Colin Woodley to delve into the newspaper archives and it transpired that Rangers’ Alfred Hitch had been allowed to replace the injured Ben Freeman during the match. The first report had appeared in the London Daily News the following day:

‘In fine bright weather and before a crowd of about a couple of thousand people, these teams met yesterday at Kensal Rise. A good game was the result, and in the end the match was drawn at two goals each.

The ground was rather soft, and against good combined work, but there was much excellent individual play.

The Rangers started well, and within ten minutes Blackwood opened the scoring for them from a pass by Wilson. Soon afterwards Freeman, one of the Rangers’ half-backs, was hurt and had to leave, and for the rest of the first-half the one-back game was played.

West Ham did most of the attacking, but Leather kept goal well, stopping one shot from a free kick in fine style. At half-time Queen’s Park Rangers led by one goal to none.

After a change of ends the home team had their full side again. Hitch having been allowed, by the courtesy of West Ham, to fill the vacancy at half-back.

In less than ten minutes West Ham equalised, but a little later the Rangers got the lead again, the ball going through the West Ham goal from a scrimmage after a free kick.

West Ham played up very well, but against some good defensive work they did not make much headway. At last, however, in the last minute of the game Kirby made the scores level, and thus the match was drawn.’

Elsewhere the Willesden Chronicle later reported:
‘Leather was playing vice Collins and gave one of his best displays. Freeman, who had been on the injured list for most of the season, came in vice Bowman, but before half-time was again injured.

At the interval, however, the Hammers voluntarily allowed Hitch, who was resting, to take his place – one of the most sportsmanlike actions I have seen for many a day upon a football field. Their conduct met with unstinted approbation from all parts of the ground and they well deserved it.

The Rangers first goal was headed in by Blackwood from a corner and was the only score at the interval.

When the game was resumed Lyon equalised, and from a scramble in front of goal Fair, in trying to clear, sent through his own goal; but just upon the stroke of time the score was again made equal.

Fair sent in a long shot and Kirby dashing up beat Leather with a grand shot, and the game ended as stated, viz, two goals all, a result which, I believe, pleased everybody.’

However, it didn’t end there. At a meeting of the Western Football League at Reading on the 3rd December, it was decided that the match had contravened the rules and must be replayed.

Rangers were due to play the away fixture on 28th January but owing to the heavy rain the West Ham ground was deemed unplayable by the referee. 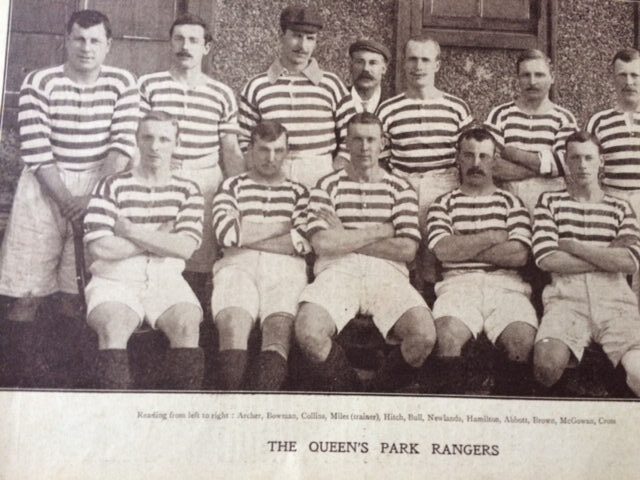 The re-arranged home game eventually took place on the 11th April. The Daily Mirror covered the match the following day:

‘When these teams met in November a substitute was allowed to replace an injured man in the Rangers’ team. The result was a draw, but the League ordered the match to be played again, and this was duly done yesterday at Kensal Rise before almost 1,000 people, who saw the Rangers win by 3 goals to 1.

Lovely weather prevailed, and the game was fairly interesting. Ten minutes from the start Thompson took a pass from Birnie, and scored for West Ham, but five minutes later, after more pressure by the United, the Rangers got down, and Bowman equalised.

From that point, the game went against the visitors, though they had the sun at their backs. A centre by Edwards enabled Brown to head through and so give the Rangers the lead.

Soon afterwards McGowan passed to Brown, who dribbled through the centre and scored.

In the second-half the play was fairly even, but the home team always seemed the better side. The United did not become dangerous very often, though Allison and Thompson each put in a good shot that Collins cleared well.’

Three days later Rangers lost the other re-arranged game 1-2 at the Memorial Grounds in Plaistow.

(The team pic comes from a 1903 copy of ‘Black & White’ magazine. Alfred is shown in the back row, fifth from the left. Thanks to Colin Woodley for his assistance)