On Christmas Day 1936, QPR recorded a 4-0 win at Loftus Road over Exeter City. Another home game followed the next day when the R’s took on Bristol City. Bushranger 11’s match report appeared in the Middlesex County Times a week later:

‘Unruly scenes a few minutes from the end marred an otherwise splendid game on Boxing Day, as the result of an incident in which Fitzgerald, the home inside-left, was badly hurt and carried off unconscious.

Unfortunately for the Rangers’ management, their supporters rather lost control of themselves. A bottle was thrown from behind the Bristol goal and a spectator came on to the pitch.

The referee motioned for the game to finish. This only added to the confusion and it was only after an announcement was made through the loudspeakers that many spectators realised full-time had been played, and the match had not been abandoned.

Whilst sympathising with the spectators’ indignation, I must deplore their method of showing it. The Rangers’ supporters must realise by now how unfair it is that the club should suffer for an indiscretion on the part of a visiting player. As it is, such scenes can only mean a rebuke from the FA.

Before these regrettable scenes the Rangers had displayed sparkling form and the forwards again shot with the accuracy they had shown in their three previous home games.

I must mention the splendid display of young McMahon, who was the outstanding forward on the field. His sterling play and good understanding with Fitzgerald, have been chiefly responsible for the big scores obtained for the Rangers, in their last few matches.

Bott opened the scoring after ten minutes, Wilson allowing a centre from the winger to slip through his hands into the net. Charlton scored the second goal with a clever individual effort after receiving a perfect pass from Cheetham.

Throughout the game these two players interchanged positions cleverly to the discomfort of the Bristol defence.

Apart from an occasional breakaway by Dane, the Bristol forwards were never dangerous, but it was only sterling play by Hampshire and Roberts that prevented the Rangers from scoring again before the interval.

A feature of games at Loftus Road lately has been the number of goals scored by the Rangers in the second-half, and in this match too, the home supporters were not disappointed.

Cheetham quickly added two goals after fine work by McMahon, and each time his task was made easy by Wilson’s mistakes.

After Bott had put in two splendid shots, Fitzgerald scored the fifth goal, after clever passing with McMahon.

The Rangers fully deserved their win and have now a side which has every chance of obtaining promotion.’ 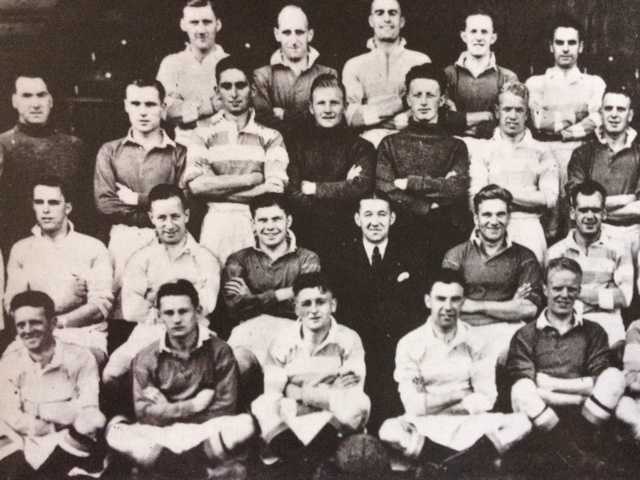 ‘Towards the end of the Queen’s Park Rangers and Bristol City match at Loftus Road, an incident between two players occurred which led to a demonstration by the crowd.

Wilson, the Bristol City goalkeeper, and Fitzgerald, the Rangers’ inside-left, came into collision, as a result of which Fitzgerald was carried off the field.

Angry booing at once broke out and a milk bottle was thrown. A spectator rushed on to the field and went towards the referee, who was trying to restrain several players.

Two days later Rangers travelled to Exeter for the return match and beat the Grecians 3-0.