On the 22nd April 1939, the R’s took on Watford at Loftus Road. The following match report later appeared in the Marylebone Mercury:

‘Staging a spirited late rally, Watford almost succeeded in snatching a point from the Rangers in a Southern Section match at Loftus Road, on Saturday, but an inspired goalkeeping display by young Reg Allen saved the home side, thus enabling them to gain their first victory in eight games.

With little at stake, neither team played dashing football and dust storms that continually swept the pitch at each gust of wind made the game duller than ever and apart from the closing minutes when the visitors stormed the Rangers goal, the game was devoid of thrills.

Rangers commenced promisingly enough, and after eight minutes Joe Mallett put them ahead when he cleverly placed a well-judged hook shot.

This incidentally, was the first “straight goal” to the Rangers credit in eight games. The only other goal during this period was scored by Smith from the penalty-spot the previous week.

Rangers’ hopes of going further ahead – for they were on top at this point – were frustrated when Dicky March received an injury which made him a passenger for the remainder of the half. He retired at the interval and did not return for the second-half.

This unfortunate incident occurred after fifteen minutes and March went to outside-left, Bott moving in from the wing, and Fitzgerald transferring to left-half.

With only four sound forwards the Rangers’ attack lost most of its sting and for the remainder of the first-half the Watford attack monopolized the play. 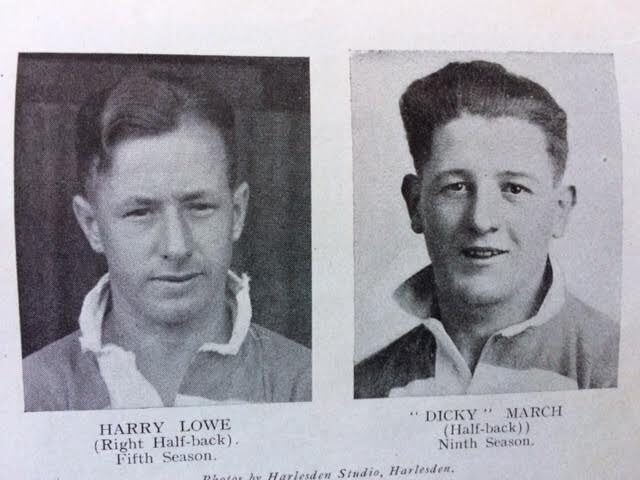 On several occasions Allen was tested with hard drives from Barnett and Jones, but the Watford attack was never a real menace, mainly because of excellent defensive play by the Rangers’ rear guard, Jefferson and Smith.

How they managed to preserve their one-goal lead at the interval was something in the nature of a miracle. It seemed as if they would lose it after the resumption, for Watford would then have the stiff breeze in their favour, but strange to say the Rangers, playing with their four-man attack and against the strong wind were far more impressive than when they had the elements in their favour.

Watford, until the last ten minutes, were never in the picture, but that closing rally all but gained for them the spoils.

Allen, however, was wonderful to watch in goal. Had it not been for this grand display, Watford must surely have returned with at least one point.

Criticism, bearing in mind the conditions, would be out of place, but there was no better on the field than Mallett.

The Rangers’ defenders played excellently and in the half-back line Harry Lowe was always prominent.

Although failing to hold the attack together, Swinfen, the Rangers’ leader, made several good individual efforts.’

The R’s went on to draw their final three games, 1-1. The decision to sell leading goalscorer Tommy Cheetham to Brentford in March, could well have cost the Club promotion that season.